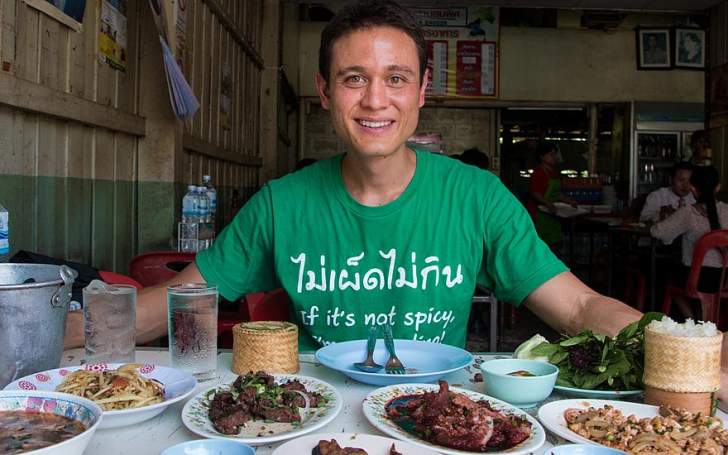 Mark Wiens is one of the most famous food vloggers. With over 6 million subscribers on YouTube, Mark has surely made a big name for himself.

The vlogger is happily married and enjoys marital bliss with his wife and son. Today we’re going to take a close look at Mark’s life. We will talk about his family life and how his career blossomed!

Who is Mark Wiens?

Born on February 26th, 1986, Mark is an American YouTuber. He is famous for his eponymous YouTube channel. Apart from being a blogger, he is also an author and an avid foodie.

His birthplace is Phoenix, Arizona, but he lives in Thailand. The 34-year-old is also the owner of a Thai restaurant, Phed Mark.

Mark is in a conjugal life with his girlfriend-turned-wife, Ying Wiens. The duo tied the knot in July 2013 after being in a relationship for several years.

During his initial days in Thailand, Mark got a job as an English teacher in Thailand. It was around this time when he first came across Ying. At first, the couple bonded over the shared love for cuisines and traveling.

Mark often mentions his wife as the most amazing person he’s ever met. Frankly, their relationship is literal goals. Everyone wants a partner who shares the same interest and passions as they have.

Wiens really lucked out in this department!

Yes, Mark and Ying are the proud parents of one boy, Micah. The lovebirds welcomed their first child on November 12, 2016.

To begin with, Mark and Ying found they were expecting during their trip to Jordan in March 2016. Ying had suddenly started craving more food, for which Mark was quite surprised.

During their trip to Jordan, Ying bought a pregnancy kit and decided to find out if she is expecting or not. Upon finding out that she was pregnant, she told her the big news to her husband.

After their return to Thailand, Mark and his wife moved to a more spacious apartment. Their previous apartment was quite cramped and there was no place for their bundle of joy.

Moreover, as the Wien family was about to get bigger, Mark bought a brand new car. All because he wanted his wife and newborn to travel with ease around Bangkok.

Mark Wiens Family: Details on his Parents and Ethnicity

Mark belongs to a mixed ethnicity family, with his mom being Chinese and Dad belonging to mixed ancestry. From his mother’s side, he is of South-Asian ancestry, whereas from his old man’s he is of mixed European ancestry.

His mom and dad were missionaries, so Mark had to move a lot from his early childhood to his teens. When he was five-year-old, Mark together with his folks relocated to Albertville, France. Later on, they traveled across the content of Africa, from the Democratic Republic of Congo to Kenya.

He completed his high school at an International School in Kenya and subsequently moved to Arizona for further education.

After completing high school in Kenya, he enrolled at Arizona State University. He opted for Global Studies as his major. Around the same time, he was working full-time.

At the time of his graduation, Mark had saved up a lot of money. He wanted to use the money to travel around the world. Soon he decided to visit South America and his first destination was Buenos Aires, Argentina. Upon reaching Argentina, he planned to take a TESOL course to become an English teacher.

Mark’s plan was to work as an English teacher in a foreign land. This will, in turn, help him travel around the world without worrying about finance.

He stayed in South America for six months, traveling to Uruguay, Chile, and Argentina.

How did Mark Wiens become a renowned YouTuber?

After his travel to South America, Mark decided to write blogs depicting his journey. It was at that time, his blogging website, Migrationology was born.

Over the next few weeks, he wrote several articles before deciding to book a one-way ticket to Bangkok. After spending a lot of time in the South-Asian country, Mark was getting low on cash.

Then he decided to make use of his TESOL certificate and worked the next year or so as an English teacher. At the same time, he was blogging diligently.

After months of hard work, he finally published his first e-book, Eating Thai Food Guide. The book earned a lot of money, helping Mark to take care of his finances.

It was around the same time he met his future wife, Ying. At the moment, he has two YouTube channels. One is his famous food channel and the other one focuses on Travel. He named his second channel, Mark Abroad, where he covers everything travel. From accommodation reviews to giving us the wanderlust feeling.

What is Mark Wiens Net Worth?

Mark’s net worth stands at $3 million. The number sounds huge, but the sheer amount of effort he has put in overshadows his total fortune.

His main sources of income are his two YouTube channels, books he authored, and sponsorships.