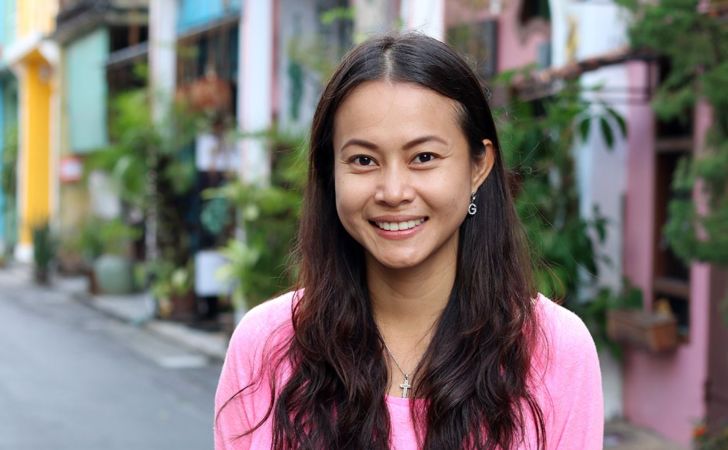 Ying Wiens is a Thai travel vlogger and the wife of a YouTuber, blogger, and author Mark Wiens. Though she has her career of her own, she gained fame only after her marriage to her famous husband Mark.  Like her spouse, she also runs her own YouTube channel and makes her own version of travel videos.

Besides, she is also a mother and has a child as well. During her journey to become a mother, she went through a lot of ups and downs. Well, in this article we are going to discuss all her motherhood, parents, relationship with her kid, and several other interesting details.

Ying Wiens Is Originally From Thailand

The popular wife of Mark Wien, Ying Wiens is a Thai national. While her exact birth detail is not known, she was reportedly born in the late 80s and must be in her 30s at present.

She spent most part of her life in Thailand along with her parents, until she met her now-husband Mark and began traveling. Ying also has a younger sister, however, she has not revealed much about her.

If you didn’t know, Ying is actually married. She is married to American food vlogger  Mark Wiens. The couple tied the knot in July 2013, in a beautiful wedding ceremony.

But how did they first meet? Well, the duo first met back when Ying taught English in a school in Bangkok. Well, their first meeting soon turned into a love affair, finally resulting in a marriage. In one of Mark’s interviews, he gladly talked about his marriage and showed his excitement of being married. In a candid conversation, he stated,

I’m so excited to be married, and part of the reason is that it means that I don’t have to say goodbye to my wife (previous girlfriend), but I’m taking her with me everywhere I go. We work together, so she’s my wife and partner in travel.

It has been around 8 years and the two are still together and are rather doing great work as a couple.  Ever since their marriage, Ying has been assisting her husband with his works. In fact, Mark has also mentioned on multiple occasions that she is the one who takes care of the behind-the-camera work and even handling the camera during shots.

Well, Ying is a mother of a beautiful son. She welcome her son Micah Wiens on November 12, 2016. She came to know about her pregnancy during her trip to Jordan, which was on 27 March 2016.

Shortly after the news of the pregnancy, they took a 39 day trip to 9 different cities across the world. But complications began around August 2016, after they took a doctor’s appointment. While everything about the child was normal, the only problem as per the doctor was that the baby was in a breech position and had not turned around.

While the doctor expected the child to turn to normal position in a week or two, things remained the same. Thus, she had to undergo a c-section delivery, which went perfectly.

She Is  Good Chef

Not many know but Ying is a really good chef. In fact, Mark is very fond of the foods made by her. He also once stated that one of the many benefits of being married to her is that he gets to eat really tasty foods.

In one of the interviews, he opened up about the fact saying,

I do enjoy cooking when I have an opportunity, but I lived in a studio apartment with no kitchen for so many years (before getting married) that I got in the habit of not cooking. Now that I am married, my wife and her mother cook so incredibly well, I barely touch the wok!

Like her husband, Ying also has a YouTube channel that goes by her name. Moreover, she also has over 9k subscribers on her channel, but unfortunately, she is no more active on the channel.

The last video she posted on her channel was back in 2016. Looks like she has changed her focus to raising and taking care of her kids. Besides, she helps Mark with his works professionally.