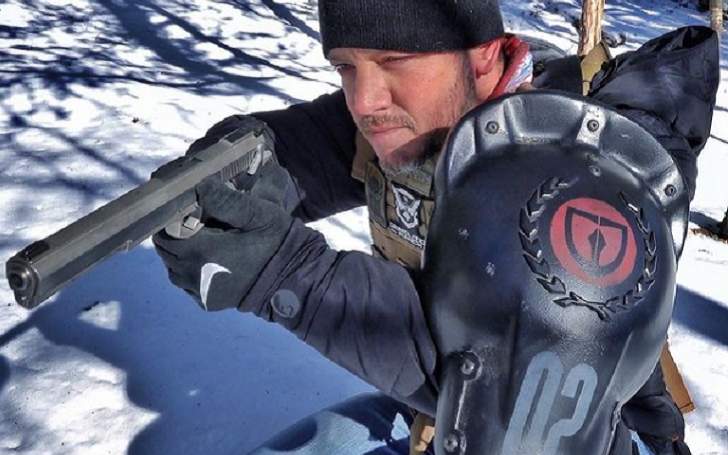 Matt Carriker is one of the most graceful YouTubers who has built three multi-million subscriber channels. He initially started filming and uploading stupid videos of himself to his ‘Demolition Ranch’ channel but later realized the potentiality of YouTube as a career. His hard work and unyielding dedication eventually paid him off well. That said, the YouTube sensation has a total of 17 million subscribers on his three YouTube channels, ‘DemolitionRanch,’ ‘OffTheRanch,’ and ‘Vet Ranch.’

Meanwhile, as for his love life, Carriker has been married to his high school sweetheart for several years now. The two are also proud parents of three kids.

In this article, let’s explore Matt’s life in detail.

Who Are Matt Carriker Parents? All About His Family

As for his date of birth, Matt was born on 21st October 1986 in Boerne, a city in Texas. He grew up in his hometown of Boerne with his family.

Besides, talking about his nationality, the YouTuber is an American and belongs to the Caucasian ethnicity.

Carriker Had Three Siblings: What Happened to His Brother?

Sadly, Matt’s younger brother Mark died after 18-months of battle with cancer on March 19, 2020, at his home. He was 31-year-old at the time of his death. Due to COVID-19 pandemic restrictions, a private burial service was organized at the Boerne Cemetery, in Texas on March 23.

Talking more about his late brother, Mark who was born in Fredericksburg, Texas moved to Boerne at the age of one and went to Boerne High School, graduating in 2006. He then enrolled at Texas A&M University in College Station, Texas. He also became part of the Fighting Texas Aggie Class of 2010. In the meantime, Mark met his future wife Jaci Phaneuf. The two wed in 2011 and they had two children, Ellie and Abram.

Matt who has a height of 6 feet (1.83 m) attended the Texas A&M University College of Veterinary Medicine and Biomedical Sciences, graduating in 2008. He received his veterinary license in 2012.

Besides, Carriker, a highly dedicated veterinarian went on to launch his third YouTube channel under the name, Vet Ranch in 2014. He has since uploaded a number of videos of treating diseases, disorders, and injuries of animals, especially dogs.

To run the channel, the YouTuber has also partnered up with the San Antonio Humane Society, a non-profit organization. It aims to protect the lives of dogs and cats by providing care and shelter. And the channel has 2.89 million subscribers in 2022. Matt uses its revenue to treat at-risk animals.

The YouTuber told The Battalion that most of the animals come from San Antonio Pets Alive, SAPA.

“What happens is someone will drop a dog off that they don’t want anymore at the pound. And there are just so many dogs in the city pound, and so they have to euthanize dogs that are not getting adopted. SAPA goes in and finds dogs that they think they can re-home, and pull them from the pound. If they have any health issues they try to fix them, and that’s where I came to them.”

He is also the owner of Bunker Branding Co., an online merchandise store for all Social Media Influencers. It is located in Kendall County, Texas. And its CEO is Steven Shotts. He runs the clothing supplier with the help of his wife and his college friend.

Has Ever Matt Carriker Been on Military Service?

Because of his YouTube content that mostly features gun firing and other military equipment, it is obvious that several of his fans wonder to know whether or not Matt is a veteran. But, Carriker only shares his transcendental knowledge on weapons on his YouTube. In fact, he was never on the military journey.

What is Matt Carriker Worth?

Matt has an estimated net worth of $2 million as of 2022. He has predominantly racked such a considerable amount of fortune from his YouTube career and many other endeavors.

Who is Matt Carriker Married to?

Carriker has been married to his wife Meredith Carrike for a long time now. The two tied the knot back in late July 2008, in a private wedding ceremony. Celebrating their 12th marriage anniversary, Mere shared a beautiful photo of the duo from their wedding day. Her caption read,

“Celebrated 12 years with @drdemolitionmatt yesterday… I’m so thankful God gave me YOU.”

It’s been over thirteen years since the two have shared marital bliss and their relationship is still going pretty strong.

In an interview with MuskOx, the YouTuber mentioned the worth of his wife in his life. There he said,

“Matt: Yeah, I’m not sure I could say enough good things about Mere. She’s my rock and has always been incredibly supportive of all the crazy ideas I’ve had.”

They Have Three Kids

The long-lasting couple is also blessed with three kids. They have two daughters, Adalyn Carriker and Annie Carriker. They welcomed their son, Lincoln Carriker in April 2014.

Matt met his future wife back in their high school days in 2004. They later went to College Station, Texas, where they both graduated from the home of the 12th man. They celebrated their 17th Valentine’s together in Feb 2021. On this occasion, Matt Carriker’s wife wrote on Insta, recalling the days they first came across,

“Our 17th Valentine’s together! First time we’ve ever gotten away for it – which only happened because it also happened to be a school holiday. Also that rose? The bartender gave it to me…”

Know Something About Matt Carriker Wife

His spouse Meredith is now a stay-at-home mom who currently helps her hubby to grow his business. She is now the owner of Linc Active and The Linc Boutique. Also, Matt’s life partner is quite active on Instagram with over 387k followers.

Besides, Meredith is an Arkansas native who moved to the Texas Hill Country while in high school. She later graduated from Texas A&M University with a degree in Civil Engineering.

Who is Dainty Wilder? Her Instagram, Onlyfans and other