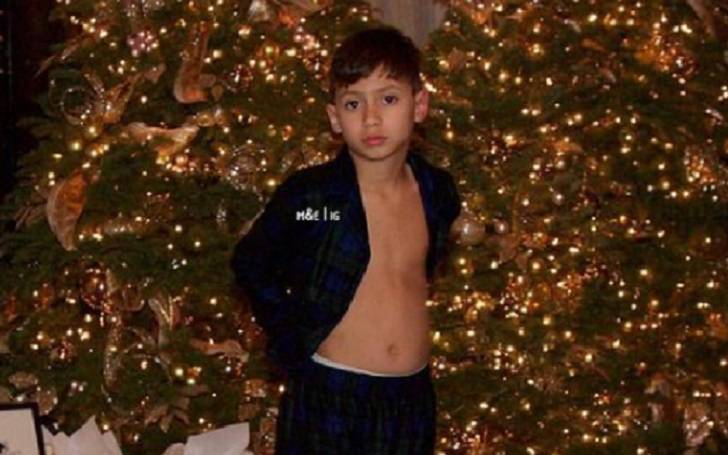 Maximilian David Muniz has been in the limelight as the twin son of former superpower couple Jennifer Lopez (aka J.Lo) and Marc Anthony. Needless to mention, both of Maximilian’s parents are legendary singers with long-lived career that has spanned over a decade and more. They have also won numerous prestigious accolades, especially Marc has won three Grammy Awards and six Latin Grammy Awards.

Being the son of such a successful mom and dad, you guys also wonder to know if Maximilian has inherited his super-star parents’ musical skills.

So let’s find out if Maximilian’s interest really lies in music or what is the pre-teen boy thinking about his career? Here is everything about J.Lo and Marc’s twin son Maximilian.

How old is Jennifer Lopez’s Twin Child Maximilian David Muñiz? All About Her Date of Birth

Maximilian is aged 14 as of 2022. He was born on 22nd Feb 2008, in Long Island, New York. He weighed weighing 6 lbs at the time of his birth. Following the successful delivery, Lopez’s manager Simon Fields told People,

“Jennifer and Marc are delighted, thrilled, and over the moon.”

His parents had a baby shower for him in New York on 19th Jan.

As for the pregnancy news, it was announced after Lopez told the crowd during her final Miami concert. She said,

“Marc and I are expecting a baby!”

But, at the time, the singer didn’t reveal that they were expecting twins. The huge news was only confirmed by his father in his interview on Spanish-language TV in early Feb 2008.

Maximilian Was Named a Week After His Birth

Maximilian’s parents named him about a week after his birth. Talking about his middle moniker David, the name was taken in the honor of Lopez’s father, David Lopez.

Details on His Early Life and Education

He had quite a lavish upbringing in his parents’ two mansions both were nestled in Brookeville, Long Island. Maximilian David Muñiz’s father bought the house there back in late 2000 for $3.7 million, whereas, his mother bought a second mansion after their wedding across the street for about $2 million.

For his education, Maximilian reportedly studies in a local school in Miami Beach, Florida.

His Ethnic Background and Nationality

Born in a Hispanic family, Max belongs to Puerto Rican ancestry as both of her parents also belong to the same background. And his nationality is American.

Max has an older twin sister named Emme Maribel Muniz who was born about 11 minutes before Max came to this world. She weighed 5 lbs. 7 oz at the time of her birth.

The twins also made headlines after their parents Lopez and Anthony sold exclusive first shots of the babies to People magazine for a reported $6 million, making it the second most lucrative photo sale at the time.

He Has Three Half-Siblings and One Adoptive Sibling

Apart from Max’s twin sister, the star kid also has three half-siblings and one adoptive sibling. They all are from his father Marc’s previous relationships.

The award-winning artist had his first child, a daughter Arianna Muniz with his then-girlfriend Debbie Rosado in 1994. The exes also shared an adoptive son Chase Muniz.

Maximilian David Muniz is the Exact Replica of His Father

Max is absolutely his father Marc Anthony’s mini-me. On the other hand, his fraternal twin sister Emme just looks like her mother Lopez.

Talking about their striking resemblance, Lopez said in an interview with Latin Times,

The singer and dancer also talked a little bit about her kids’ opposite personalities,

“They’re complete opposites. But she’s like super focused and super sensitive and quiet and focused and he’s kind of off the charts, lots of energy, super funny.”

The twins also frequently make an appearance with their mother on various TV shows. Back in April 2019, Lopez herself uploaded a video on her YouTube channel. In the clip, the twins asked random questions to their mom,

Back in 2020, at the Super Bowl halftime show, Lopez didn’t only perform with Shakira and Bad Bunny but the artist was also joined by her twin daughter Emma on the stage. Looking at her singing prowess, everyone became well-aware that Emme has been following in her parents’ vocal talents.

In the meantime, there is also her twin sibling Max who, although, wasn’t on the halftime stage takes after his mom and dad’s singing skills.

In Feb 2019, on the occasion of their 11th birthday, her mother J.Lo posted a video, in which, Max has shown off his vocal skill in the background. She captioned the image,

“Happy Birthday my lil beautiful coconut brilliant boy. Mommy is so proud of you!!! #foreverlove.”

Similarly, Lopez has likewise shared several other posts, showing the musical talents of her boy.

In Sept 2019, J.Lo uploaded a video of Max singing Vance Joy‘s “Riptide,” where his sister Emme was playing guitar. Furthermore, back in May 2020, Lopez shared a photo of her son from the recording studio.

The proud mom J.Lo takes pride in having twins. In March 2017, the singer told Today about being a mom to twins. She said emotionally,

“They just made my life so much better. I’m forever grateful for that…you know, I didn’t have kids until later and so I almost thought that it wasn’t going to happen for me, so I’m very aware that I was blessed with that. It could have been something different.”

In the same interview, Lopez talked about her time management during her hectic schedule,

“I take it one day at a time. Me and the kids are like gypsies. We’re traveling all over the place, just getting it done, doing the best we can.”

Lopez and Anthony tied the knot in June 2004. The duo was also in a relationship for a few months in the late 1990s. Their wedding ceremony took place only a week after Marc’s divorce finalization with Dayanara.

However, the duo couldn’t last long and they separated in July 2011. Marc filed for divorce from his then-wife Lopez in April 2012. And their divorce proceedings came to end in 2014.

Following his divorce from Lopez, Marc went on to marry his third wife Shannon De Lima. The two also divorced after two years of their marriage.

His Mom and Dad’s Amicable Co-Parenting

What is Maximilian David Muñiz’s Net Worth in 2022?

Maximilian David Muñiz is still a schoolboy, which is why the amount of his net worth is yet to be guesstimated. But, talking about his lifestyle, it is obvious that Maximilian being the son of two successful parents has quite a luxurious lifestyle.

In the meantime, his father Marc has an estimated fortune of $80 million, whereas, his mother Lopez’s net worth stands at $150 million as of 2022.