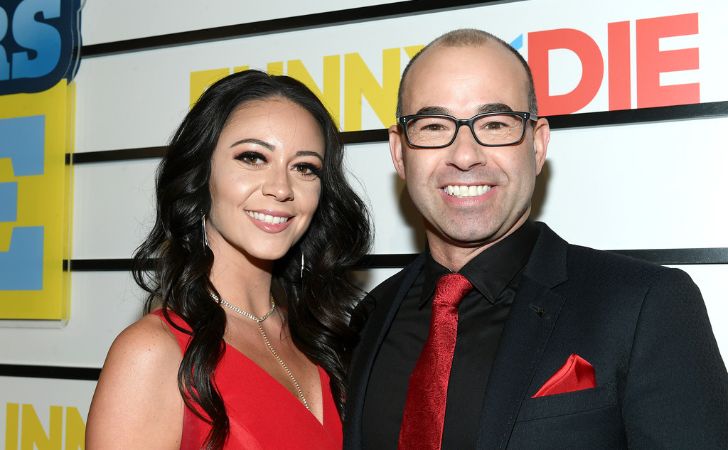 Melyssa Davies is a celebrity spouse who gained fame after her marriage to Impractical Jokers’ James Murray and things still seem great between the couple. While has earned the title of “James Murray’s wife,” what else do we know about her apart from her marriage.

Who actually is Melyssa Davis? Well, Melyssa is a nurse by profession, who only hit the media after her relationship with the comedian. From the beginning of her relationship with Murray to her successful marriage, get to know all the details. Further, we will also discuss her career and other interesting facts.

Melyssa Davies Led a Beautiful Childhood: Her Age and Other Early Details

The beautiful lady Melyssa was born as Melyssa Kim Davies on March 13, 1995, in Pennsylvania, United States. She is 26 years of age as of 2022. As a child, she spent a major part of her childhood in her hometown with her sibling and parents.

Davies is apparently very close to her mother Kim DiNofa Davies and shares a great relationship. Besides, in her now-deleted Instagram account, Melyssa referred to herself as “Just a tall, lanky brunette who doesn’t want to buy your hair care products”.

Melyssa Davies Is a Nurse By Profession

Though Davies is now known as James Murray’s wife, she has her own accomplishments as a professional. An avid animal lover, Melyssa finished her nursing shortly before her engagement with Murray.

As of 2022, she works in the field of geriatric and hospice care. If sources are to be believed, she earns a decent net worth estimated at around $70 thousand annually.

Melyssa Davies Is a Dog Lover

Melyssa is a huge dog lover. She has named her dog Penelope, but she lovingly calls her Penny. In fact, Melyssa even has a separate Instagram account for her dog, pennythepoochmurray.

Well, she is very close to her dog and has even mentioned her dog as her love in one of her Instagram posts.

One of the most anticipated weddings, Melyssa is finally married to James Murray. Amid the ongoing pandemic, the long-term couple tied the knot on September 25th, 2020, just days before they had actually planned the wedding.

Their nuptial was held at Lake House Inn, Bucks County, Pennsylvania. The guests at the ceremony included her family and friends and the co-stars from Impractical Jokers.

Both the couple looked beautiful in their wedding dress. While James looked dapper in a black suit, a bowtie, and his signature glasses, Melyssa looked gorgeous in a white gown with a long veil.

The Couple Got Engaged In August 2019

Melyssa Davies got engaged to her then-boyfriend James on 30th August 2019. Murray proposed to his to-be wife Melyssa at their home in New Jersey, with a beautiful Tiffany & Co. solitaire round diamond ring.

Well, the Impractical Joker star didn’t waste a second and announced the news via an Instagram post. He referred it as the most beautiful day in his life, writing “Best day of my life.”

However, Murray had not originally planned to propose to her so early but rather during their vacation in Turks and Caicos. But he had to drop the plan because of Hurricane Dorian in the Bahamas.

How did Murr and Melyssa meet?

Melyssa’s story with James began in June 2018 when she met him at his debut novel Awakend‘s party in New York. They soon became friends and eventually started dating.

Talking about their meeting, Murray explained it was a different experience and the one he had never had in his life. He told People,

We hit it off that night immediately. We had immediate chemistry and our relationship was immediately different than any other I’ve had in my life

As per the report, Melyssa went on a first date with James in a restaurant in Buddhakan, in New York. The duo also went out on several vacations before taking the wedding vows.

Their marriage was held on March 13, 2014, among friends and family, and Jenna’s brother Sal was forced to watch the ceremony. All the while, Sal’s mouth was sealed and body wrapped.

However, they annulled their wedding just a day after their honeymoon night. Well, this episode of the show is considered one of the craziest episodes so far.

As we mentioned earlier, Melyssa’s husband James is a successful actor and producer as well. Apart from being part of Impractical Jokers, he has appeared in numerous movies and TV series.

He made his acting debut back in 1997 appearing in an uncredited role in Private Parts. later, he appeared in numerous short movies like Criss-Cross, Time Thugs, The Comedy Roast of Jesus Christ, & many others as well.

His major appearance as an actor in TV series includes Down to Business, Gods of Medicine, & MacGyver to name a few.

Some of his other works as a producer are Jokers Wild, Impractical Jokers: One Night at the Grand, Say Whaaat? & numerous others.

How Much Is Melyssa Davies Net Worth?

Melyssa grabbed major media attention after her marriage to Murray. Well, the exposure she has gained must have hugely helped her improve her wealth. However, so far, she has not revealed her net worth.

On the other hand, her spouse is pretty rich with over $7 million in net worth as per Celebrity Net Worth. As a producer and actor, the sum is pretty obvious.