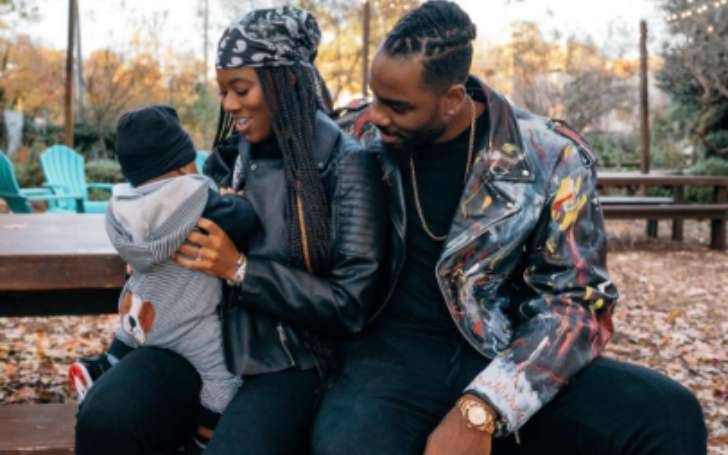 Jasmine Jordan is a celebrity kid who rose to fame as the daughter of the legendary former basketball player Michael Jordan. Her father Jordan is one of the biggest names in NBA history. Michael had her with his first wife, Juanita Vanoy, with whom the basketball star separated later due to some issues.

Jasmine not only enjoys the life of a star kid, but she also helps her dad in his business. She works as an executive for her father’s Jordan brand. The star kid never had an interest in playing basketball like her daddy and siblings, however, she has been a coordinator of basketball operations at Charlotte Hornet for 8 years.

Moving toward her personal life, Jasmine is currently in a relationship with her boyfriend Rakeem Christmas with whom she also shares a child. On the other hand, Jasmine also sparked a rumor of being bisexual and dating a girlfriend at one time. What’s the truth? Let’s find out if she really dated a girl. Further, let’s also explore other interesting aspects of her life.

Jasmine was born as Jasmine Michael Jordan on December 7, 1992, making her 30 years old in 2022. She holds American nationality and belongs to the African-American ethnicity.

Jasmine Jordan Grew Up In Chicago With Her Siblings

Jordan is the only daughter of her parents; father Michael Jordan and mother Juanita Vanoy. Besides, she has two biological brothers; Jeffrey Michael Jordan and Marcus James Jordan. Jasmine also has two half-sisters (twins),  Victoria and Ysabel Jordan, born from her father’s second marriage to Yvette Prieto.

She was raised in Chicago along with her siblings in a normal environment, out from the glamour. Though her dad wanted her to have the life she wanted, her mom wanted them to understand their roots.

Previously, Jasmine gushed with Instyle that her mother used to tell her, “I’m going to raise you how I think you should be and once you become an adult you decide what you want to do.”

Now, all the three are grown up and have their own life. She says Jefferey is a homebody who lives in Portland whereas his other brother Marcus is more open to the public. And to speak about herself, she expressed that she is a combination of both.

Unlike other celebrity kids, Jasmine did not attend any exclusive school for her education. Rather, she went to public high school in Chicago which let her understand the way ordinary people lived out of the limelight.

For the first two years, she went to a private Jesuit Catholic Academy in Wilmette, Illinois, and later transferred to public school for her junior and senior years. Afterward, she enrolled at Syracuse University for her Bachelor’s degree in 2011. She studied Sports Management and graduated in 2014.

Is Jasmine Jordan Married? Who is Her Husband?

Well, there have been a series of speculations that Jordan and her fiance Rakeem Christmas are married, however, the couple hasn’t addressed their wedding rumor as of yet. As a matter of fact, the couple doesn’t share their love life in the media that easily.

Regardless, she exchanged rings with her long-time boyfriend, Rakeem Christmas who is a professional American basketball player for BSN. The duo got engaged after three and half years of relationship in 2018. Jordan announced her engagement through a post on her Twitter on 11 June 2018.

Speaking of the couple’s first meeting, Jasmine and Rakeem were college sweethearts. She met the love of her life at college in Syracuse and was best friends then. Eventually, her to-be husband proposed to her after their graduation when he went through the NBA draft.

According to her statement, Jasmine felt “weird” when her then-boyfriend proposed to her as they were very “close friends.” Nevertheless, Rakeem convinced her to accept her proposal and the pair got engaged eventually. After their engagement, Jasmine made her fiance meet her dad and luckily they gelled up and he has a good relationship. In fact, Michael’s little girl says her dad and fiance are almost like best friends.

Meanwhile, Jasmine’s partner also met her mother when the pair was back in their college days. He is close to both of his girlfriend’s parents and she is overwhelmed by this fact.

Does Jasmine Jordan Have a Baby?

Yes, Jasmine gave birth to a child, Rakeem Michael Christmas, on May 4, 2019. This is the first son of Jasmine as well as the first grandson of the former basketball star Michael Jordan. The couple welcomed their baby boy less than a year after their engagement. The pair are enjoying their parenthood.

The mother of the child first revealed her pregnancy on December 31, 2018, via Instagram where she showcased her baby bump for the first time. Later, she started uploading photos more frequently making her fans updated about her pregnancy journey.

Later, Jasmine also did a maternity photo shoot in March 2019, where she wore a beautiful blue gown. Back then, the dad-to-be was dressed in a white shirt and casual pants. Furthermore, the duo had a lavish Safari theme baby shower on April 7, 2019.

Well, back in 2013, multiple tabloids speculated Jasmine Jordan for being a part of the LGBTQ community. She allegedly posted a picture with her then-reported girlfriend Tyson-Thomas with the caption “This Little Closet Is Holding Me Back.” Nevertheless, the photo has since been deleted.

While the rumors outburst, Jasmine reportedly confirmed the gossips were somewhere true. According to sources, she previously wrote,

“Until love, trust, honesty, respect, loyalty, commitment, genuine happiness, and other characteristics or aspects I want in a relationship are defined by one gender then and only then will I discuss my sexual preference.”

Jordan is highly active on all social media platforms. The mother of one has an Instagram account under the name “@mickijae” with 162K followers and 895 posts as of July 2022. Similarly, she is also active on Twitter @MickiJae with 22.4K followers.

On the other hand, Jordan’s fiance, Rakeem Christmas is also active on Instagram where he goes by the handle @rakeemchristmas and has 53.7K followers in July 2022.

Jasmine Jordan is currently working as a coordinator in Basketball Operations at Charlotte Hornets. She has been working there since May 2014. The star kid also correspondingly supports her dad’s business as an executive at Jordan Brand.

Even though Jordan is from a wealthy family, she has done a lot of hard work to make her own name. She started her first job at the early age of 17 when she was a Sales Associate in Forever 21 from June 2009 to August 2009. After that, she worked for Chicago Bulls for 3 months in a ticket sales department.

Apart from being a star kid, Jasmine has a career of her own. She is doing great in her profession and making a lot of money. Jasmine Jordan has a net worth of $1.5 million in 2022.