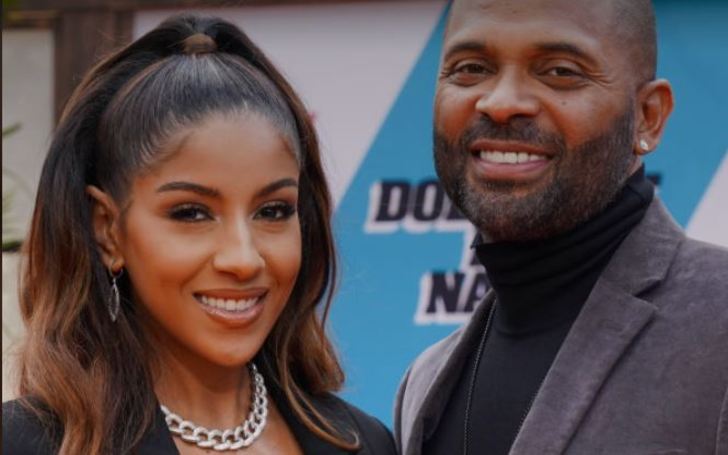 Kyra Robinson or Kyra Epps is the wife of actor, comedian, Mike Epps. She is also a show producer at the network, OWN. Robinson currently works with the OWN network on the hit show, Iyanla, Fix My Life. Before OWN, she was associate producer on shows like Paternity Court and Keke Palmer’s Show, Just Keke.

Her husband is famous through his iconic role as “Day Day” in Next Friday and Friday After Next. He’s also starred in films including Girls Trip, Hangover, Dr. Doolittle and Dolemite is My Name.

While her husband, Mike has spent more than two decades making popular comedy films and television appearances, Kyra has worked in the entertainment and has built a successful career working behind the camera. She gets credits for the messy work that is done off the camera; mostly in the production.

Know all about Kyra Robinson; her life prior to meeting Epps, how the two became husband and wife; do they have children, and much more.

Kyra Robinson Is A Midwestern

Kyra was born on 16 September 1984. Like her husband, Robinson is also from the Midwest; she though is a native of Chicago. She lost her father shortly after she was born.

Robinson studied at Whitney M. Young Magnet High School. She originally wanted to be a news anchor when she was a child.

So after high school, she went to Columbia College in Chicago to earn a bachelor’s degree in broadcast journalism.

As a college student, she also interned at NBC’s investigative unit. She, however, would quit her interest in investigation after that and then go to Costa Rica to study Latin American history and journalism from Universidad de Veritas.

Following graduation, she returned to Chicago to complete her studies at Columbia College.

Kyra Robinson Has Years Of Experience Working Behind The Camera

Robinson’s career took off after a pitch for a show landed her a job working alongside former The View executive producer Candi Carter.

She was 21 and working for Judge Mathis when she decided to create her own television show. The Chicago native, henceforth, pitched It Girl Chicago to a friend of hers who worked at OWN. She soon got offers from three different companies all wanting to work with her.

The Columbia College graduate ended up choosing to collaborate with Candi Carter, who worked with Winfrey and at the time was the executive producer of The View.

As of the present, Epps’ wife works as part of the Oprah Winfrey Network (OWN) and, as per her LinkedIn profile, has produced shows including Just Keke, Paternity Court, and Sex Box.

For her role as the producer of Iyanla, Fix My Life, she received an NAACP Image Award.

She Has Been part Of Numerous Other Shows

In the early 2010s, Kyra Robinson started to host her own internet talk show on YouTube, called Kyra Ave Talk Show. The show, which is now no longer in existence, allowed her to interview celebrities and build her online profile.

Robinson, who is now 37-yer-old, also served as the Executive Producer of BET’s Social Media Awards, which she helped create with her husband, Mike.

Recently, she has also delved into motivational speaking.

When Kyra met her current husband Mike, he was allegedly still in the process of divorcing his wife of 10 years, Mechelle McCain.

Prior to dating Robinson, Epps was the husband of producer and actress Mechelle McCain. The former couple had met on the set of The Fighting Temptations.

The Next Friday star finalized his divorce from Mechelle McCain in Sep 2017 and shortly after, Robinson and Epps started to date out in the open. In fact, they had started sharing images of each other on social media even before the end of Mike’s marriage with Michelle.

Mike proposed to Kyra in May of 2018. However, Kyra only announced the news of the engagement in September 2018.

Some Big Celebrities Were Present At Kyra And Mike’s Wedding

They tied the knot in a private ceremony in Newport Beach, California in June 2019. Epps married his long-time fiancée Kyra Robinson in a fancy celebration by the beach at the luxurious Pelican Hills Resort.

The couple celebrated their big day against an ocean backdrop in an intimate ceremony with 200 of their closest family and friends in attendance.

The wedding had white cherry blossom trees and low lush flowers lining the aisle. Epps sported custom Tom Ford tuxedo and Christian Louboutin shoes. The bride, on the other hand, wore a Pedram Couture gown, complete with a 20-foot train and diamond headpiece.

Among the attendees were celebrities like Snoop Dogg, T.I., and Tiny, and Doug E. Snoop and his wife Shante Broadus allegedly skipped the awards show in order to make the wedding.

After the ceremony, the newlyweds enjoyed the reception performance from The Whispers. As such the pair shares a keen love for the R&B group. T.I. and Tameka “Tiny” Harris also left the BET Awards in order to make the reception in California.

Although Epps and Robinson didn’t share too many details about their wedding date, the bride did post photos from her all-white bridal shower. It was held at Louis Vuitton in Chicago.

Together Kyra Robinson And Mike Epps Are Parents To Two Children

With Epps, Robinson is the mother of a daughter and a son. She and her actor husband welcomed their first child, a daughter, Indiana Rose Epps, in March 2020. After that, Mike Epps, and his wife, Kyra welcomed their second child, a son in Oct 2021.

Her actor, comedian, and producer husband is also a father to four daughters from his previous relationships. Mike had them from his two previous partners.

For Kyra, it is her first time having children. Her husband’s other children’s names are Maddie, Makayla, Moriah, and Bria, the latter being the oldest.

Her Husband’s Past Relationships

When together, Robinson’s ex and Michelle McCain became parents to two children, Maddie and Mariah before divorcing in September 2017.

Three years after their separation, in October 2021, Mike Epps’ ex-wife, McCain accused him of cheating on her with his current wife, Kyra Robinson.

Epps’ former wife also reported The Hangover star mistreating her throughout their marriage.

Kyra Robinson Net Worth; Is She Richer Than Her Husband?

While her actor husband, Mike Epps is clearly a millionaire with a fortune reportedly around $5 million, Robinson’s net worth is nothing more than a matter of conjectures and theories.

Hardly any publications have ever teased on the subject with respect to Ms. Epps’ monetary achievements. And considering she mostly works of the camera, the chances of such a topic getting publicly discussed seem naturally stunted.

Though, the odds are that she could very certainly be a millionaire, however, whether or not more wealthy than her husband is another mystery.

Who is Dianne Holechek? All About Chuck Norris’ First Wife