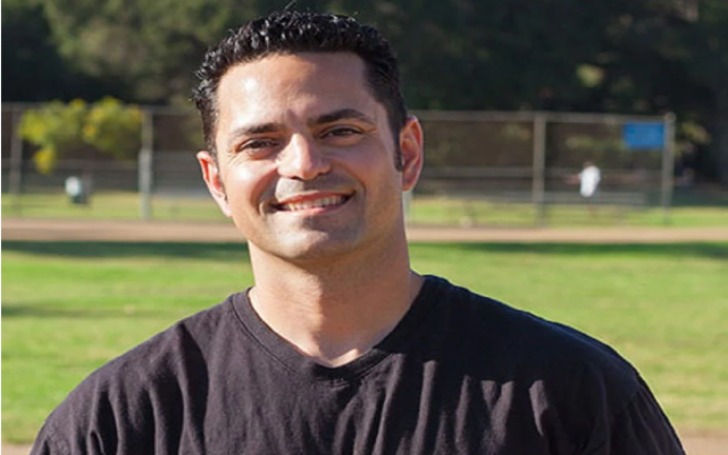 Mike Vitar aka Michael Anthony Vitar is an American firefighter who also was a former American actor. He rose to prominence at the age of 12 as a child actor. He made his first appearance in Benny the Jet as Benjamin Franklin. And the former actor rose to prominence following his role as Luis Mendoza in The Sandlot.

Aside from his professional endeavors, Vitar is also leading a blissful married life with his wife Kim Vitar. They are also proud parents of three children together. Besides, did you know Vitar was once chared of chasing and harassing a man who was handing out candies on Halloween?

Well, we have come up with several other details about him including his brother’s death, family background, and more!

Mike was born on December 21, 1978, in Los Angeles, California. His parents raised him along with his two other older siblings Pablo Vitar (brother) and Elizabeth Vitar (sister). Mike has not openly disclosed about his parents yet.

Talking about his education, Vitar graduated from St. Francis High School in LA in 1997. Besides, the former actor is American as per his nationality and has a mixed ethnical background.

His older brother Pablo Vitar was also an actor. He appeared in the older version of the same role Benny in The Sandlot. Like his brother Mike, Pablo didn’t continue with his acting career for a long time.

After giving an end to his acting career, Pablo joined the Los Angeles police department in 1996. A few years later, Pablo, sadly, left this world on January 29, 2008, due to colon cancer. His sudden demise was a big shock to Mike and his family.

Professional Career: Mike Vitar Started His Career at The Age of 12

As aforementioned, Mike began his acting journey at the age of 12. He is widely popular for his role in The Sandlot. Moreover, the actor has played many other popular roles if different TV series and movies like Sunset Grill, The mighty Ducks, Brooklyn Bridge, and many more.

In 1997, Vitar played the role of Carlos Lunes in the medical drama TV series Chicago Hope. The last time, the actor appeared in an on-screen project was in the movie The Sandlot 2 (2005).

Since then, Mike hasn’t made a single appearance in any movies and TV shows. But, the ex-actor has given hope to his fans that he might return someday, While asking about his comeback in the film industry, the actor once replied,

“I would like to meet anybody and everyone who has supported me even though I’ve been out of the acting business for ten years now.”

“To all the fans I have nothing but love and great respect for all of you and who knows I might one day consider acting again. SO STAY TUNED!”

What is Vitar Currently Doing?

As aforementioned, Mike is currently working as a firefighter. Although the former actor was once temporarily suspended for 6 months, Vitar rejoined his job. He started his profession as a firefighter in 2002, joining the Los Angeles Fire Department and has still been working for the department.

Legal Troubles: He Was Once Suspended For Six Months

Later on, they chased and pinned down Chang and chokehold him until the guy became comatose. They did provide him with CPR before taking him to the hospital. He was in the hospital for a long time.

Following the incident, Vitar and his friends were taken into custody. Mike had to pay $2000 to the victim but the restitution amount has yet to be determined. They were sentenced to 4 years in prison. But, Mike pleaded no contest to misdemeanor battery and was initially released on $30000 bail. Later, the firefighter was temporarily suspended from his work for 6 months with no payment. He also had to take 12 months of anger management class.

Is Mike Married? Who is His Wife?

Mike Vitar tied the knot with an American photographer named Kim Vitar in 2006, in a low-key family-oriented ceremony. Sources say Mike and his wife Kim were in a long-term relationship before their marriage.

Although the details about their nuptial and initial romance aren’t much in the media, the loving duo is leading a happy matrimonial life. There are no rumors about their separation yet. The couple is happily spending their life together with their kids.

Does Mike Have Any Children With His Spouse?

Yes, they are the parents of their two sons and a daughter. Kim and Mike welcomed their eldest son Eli Vitar on March 12, 2007. Likewise,  they had their second child named Wesley Vitar on April 30, 2009. She has posted about her children on her photography page.

After that, they gave birth to their youngest child Noah Paige Vitar on January 31, 2013. The couple seems to have an amazing time with their three little adorable kids.

His Wife Kim is a Photographer

As we mentioned above Kim who was born in July 1981 is an avid photographer by profession. She has also created an Instagram account named @kymvitarphotography to promote her photography. So far, Kim has amassed over 1.3k followers on her Insta.

Yes, the firefighter isn’t fond of social media handles. He is only active on Instagram with only three posts so far. And his followers on his Insta are over 2.7k as of 2022.

The last post, Mike uploaded on his Insta was back in July 2014. He captioned his teenage photo,

“At one of my photo shoots when I was a teen, I’m new at Instagram and I haven’t posted in a long time, can I have a shoutout ?”

What is Mike Vitar’s Net Worth