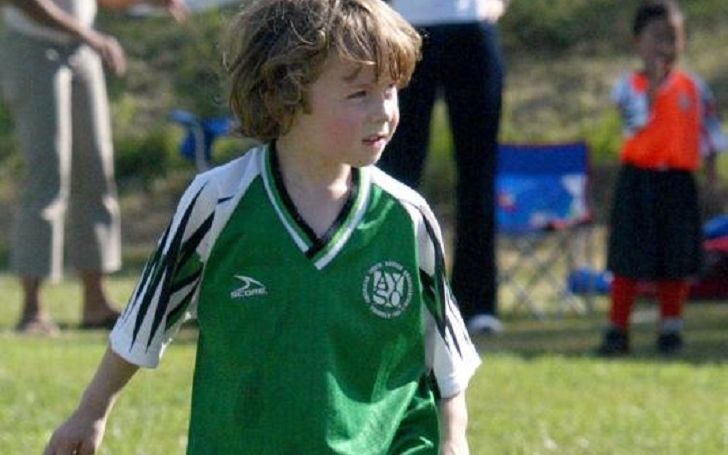 Miles William Guggenheim has been in the media since his birth as a son of one of the beloved couple Davis Guggenheim and Elisabeth Shue, an actress who got the nomination for Academy Award after her role in Leaving Las Vegas. His proud parents are leading a delightful marital relationship for over two and a half decades.

Where is Miles William Guggenheim From? Take a look at His Parents and Ethnical Background

Miles was born on 11th November 1997. His mother Elisabeth gave birth to him at Cedars-Sinai Medical Center, a hospital in Los Angeles, California. Her publicist, Stephen Huvane disclosed the news to AP News a few days after Guggenheim’s birth.

Besides, moving towards his ethnicity, the star kid has a mixed ethnical background as his mother is of German and English ancestry while his father is Caucasian. He belongs to American nationality.

Mother Elisabeth Named Him After Her Brother

The Academy Award-nominated actress named her oldest son Miles William Guggenheim after her brother William Shue. Her older brother tragically died from a freak swing accident on 24th August 1988. At the time of the dreadful accident, the now-late Robert Wood Johnson School of Medicine pupil, William was on a family vacation. Elisabeth’s brother Andrew Shue closely witnessed the accident.

Grandfather was also a Big Name in the Entertainment Business

Guggenheim’s pateranal grandparents were Marion Davis and Charles Guggenheim. His grandfather Charles is considered one of the greatest documentary film directors who won four prestigious Oscar Awards from twelve nominations. Born into a prominent German-Jewish family, Guggenheim was initially suffered from dyslexia but later it was recovered. He also served in the United States Army before finding his true passion for directing.

Grew Up With Two Siblings

Miles has two younger sisters; Stella Street Guggenheim, born in March 2001, and Agnes Charles Guggenheim, born on June 18, 2006. His sista Stella studied at the School of the Art Institute of Chicago. Besides, like her mother, Street also practiced gymnastics.

Davis Guggenheim’s son attended the Brown University in 2016 and earned his Bachelor’s degree in Modern Culture and Media & Creative Writing from the college in 2020. Moreover, back in Sept 2001, Davis himself revealed to The New York Times his dilemma regarding the education of his then-three-year-old son Miles. The TV director recalled,

“The ideals of the kind of life I wanted to lead were hitting up against the reality of where I was going to send him to school.”

”The private schools we visited were incredible — but so removed and detached.”

Besides, Miles has kept most of his life away from the media. While there is not much known regarding his professional career, sources say Miles currently serves as a part-time article writer for The College Hill Independent.

What is Miles William Guggenheim Net Worth?

His fortune is around $200,000. In the meantime, both of his upper-middle-class parents have earned a considerable fortune. On one hand his mom Elizabeth’s net worth stands at $12.5 million and on the other hand his dad Davis has an estimated wealth of $8 million.

As of now, Miles resides in his parents’ house located in Los Angeles. His mom acquired the 832 sq ft property in 2008 for $1.65 million. The duo previously owned a house in Sunset Strip-area which they sold for $1.3 million back in early 2004.

What About His Love Life?

Miles William isn’t dating anyone officially. He has remained tight-lipped about his personal life. Therefore, we yet to confirm whether Miles does have a girlfriend or not.

How Long Are His Parents Married? Their Decade-Long Love Story

It becomes quite hard for every busy couple to manage their personal and professional life hand in hand. But, when it comes to Elisabeth and her longtime husband Davish, the two are happily married since 1994, rising three now-grown kids together.

The power couple first met in a bowling alley. Davis told The Washington Post there was an immediate connection between the two,

“fell in love with each other right away.”

After years into a relationship, the two eventually decided to marry in August 1994. The same year, Shue and her brother Andrew were also inducted into Columbia High School’s Hall of Fame.