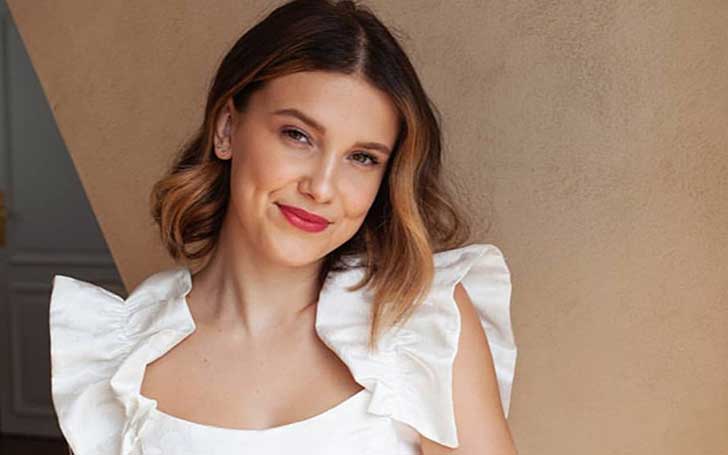 Spanish-born British actress Millie Bobby Brown gained worldwide attention for her role in the Netflix series, Stranger Things. Her fans are always curious to learn about her dating life and relationships.

The 16-year-old also made a buzz in the entertainment industry for her relationship with Romeo Beckham in 2018, but their relationship ended soon. So, who is Milly Bobby Brown dating in 2020? Let’s have a journey through her relationships.

The Stranger Things star is currently dating Joseph Robinson, son of English rugby star, Jason Robinson. Brown and Robinson were rumored to be dating in late 2019, which they confirmed in January 2020.

The young lovebirds confirmed the lovey-dovey via Joseph’s Snapchat, sharing their photo and writing “Ly x” in the caption. In the mirror-selfie, Joseph can be seen wrapping his arms around Brown.

Brown and Robinson were first seen together on the latter’s father’s Instagram handle. In the photo, the lovebirds were seen smiling for the snap after they enjoyed a meal on their trip to the Maldives.

Where Did They Meet For the First Time?

Brown and Robinson haven’t opened their mouth at their first meeting. However, many online media reported they first met each other during their trip to the Maldives in November 2019.

Meanwhile, a couple of days before Christmas 2019, Brown and her boyfriend Robinson shared matching photos on a dog walk. The posts fueled their romance rumor, however, they didn’t give a hint that they went together for a dog walk in their posts.

Even though Brown hasn’t revealed who her first boyfriend was, her fans believe YouTuber Jacob Sartorius to be the one. Brown and the rising YouTube star Sartorius started dating in December 2017. They went public as a couple in December that year.

The ex-lovebirds were pretty candid about their relationship on social media. They used to share lots of photos on their Instagram which enticed millions of their fans.

However, in July 2018, they confirmed they were no more an item. Brown and Sartorius confirmed their breakup via Instagram on July 31, 2018.

“The decision w mills was completely mutual & we are both happy and remaining friends,” wrote Sartorius on his stories. Likewise, Brown wrote the same thing on her Instagram story.

Did they Reunite after Their Breakup?

Brown and Sartorius had unfollowed each other on social media after their “mutual” breakup, though they re-followed each other shortly later. And in early 2019, several online media reported them to have reunited. Even, Capital FM confirmed they were back together as a couple in January 2019.

The outlet reported Brown wished Sartorius on Instagram stories, where she shared their photos and wrote “HAPPY BDAY @JACOBSARTORIUS LOVEU” on it with a pink heart emoji. Moreover, Brown had previously shared a photo wearing Jacob’s t-shirt.

Meanwhile, neither Brown nor Sartorius said anything about their reunion.

Furthermore, the outlet also reported that the fashion designer mother had even approved her son’s burgeoning romance with Brown.

Brown met Beckham and his family for the first time in December 2016, when she handed out an award with David Beckham at Unicef’s 70th anniversary gala. Brown and Beckham, however, didn’t remain together for long.