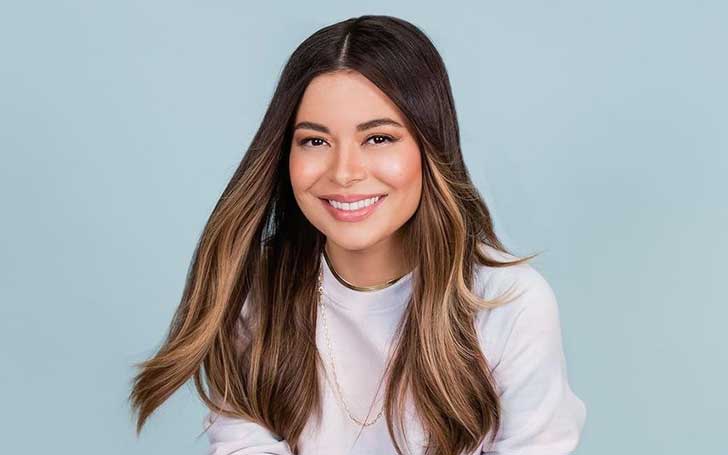 We all know Miranda Cosgrove for her iconic portrayal of Carly Shay in the Nickelodeon teen sitcom iCarly. Although the 28-year-old actress loves being in the spotlight every now and then, she lives quite a private life. Besides, she keeps herself from sharing her love life on social media as well.

Most of her social media posts give insights into her professional career rather than her personal life. No matter how much she tried to conceal her love life, some info has slipped out. So, who is Miranda dating in 2021? Has she gotten married?

Let’s have a closer look at her love life and relationships.

As of June 2021, Miranda Cosgrove doesn’t seem to be dating any boyfriend. Her social media posts don’t give any hint on her having a boyfriend at present she has not acknowledged being in a relationship recently.

Meanwhile, even if she is dating a guy, she might be keeping it to herself due to her tendency to keep her private life private.

Her Relationship with James Maslow

Even though Miranda and Maslow didn’t confirm being in a relationship, various online sources have revealed about their romance. The ex-pair reportedly dated for nearly two years from March 2007 to February 2009. James is also a Nickelodeon actor who once made a guest appearance in Miranda starred iCarly.

Miranda and James have been spotted together several times in recent years, so we can say the ex-couple are still good friends.

After David’s guest appearance on the Nickelodeon show, iCarly in July 2009, rumors about Cosgrove and the American Idol runner-up singer’s romance started swirling. Since his appearance on the show, the alleged lovebirds were seen hanging out together multiple times. But, the duo never addressed their relationship rumors.

In the meantime, Miranda and Archuleta stopped making their public appearance after some time. So, it is still unclear if they ever dated or not.

People speculated Miranda and Nat Wolff were an item after they were spotted leaving a concert together in 2010. However, Cosgrove soon shut down the rumors saying she and The Naked Brothers Band alum were “only friends.”

Meanwhile, some online tabloids have mentioned they secretly dated from May 2009 to January 2011. Moreover, the actress had revealed she was going through a tough breakup in 2011, which many of her fans speculate was the end of her relationship with Nat. Back then, Miranda said:

“I’ve only had one serious boyfriend, but we dated for three years. We broke up not that long ago. He’s the one guy I really, really liked. People say they have that one person they never forget-I feel like that.”

“Even though we don’t talk too much anymore, he’ll be the one who got away,” Miranda added.

Miranda and actor Ehrich were first rumored to be dating in 2010 after the latter guest appeared on iCarly. Shortly after, Ehrich clarified there was nothing going on between the two. “We are really good friends. We really are” he told Access Hollywood in December that year.

Nearly two years later, the two were captured hanging out in Hollywood in November 2012. They reignited their romance rumor with their public appearance back then, however, the rumor vanished in thin air as they never appeared together in the public again.

Miranda and Noah never confirmed if they dated or not, however, some of their fans believed they did. In 2013, the pair attended a Lakers game together which made their fans believe there was something spicy between the couple.

Well, nearly seven years later, a fan resurrected the pictures of Miranda and Noah on Twitter where the fan wrote, “ok how am i just finding out that Miranda Cosgrove and Noah Centineo dated in 2013?” However, since no official source has ever spoken about their romance, so we can’t assert the pair dated.

Despite being so popular, Cosgrove has managed to keep her personal life away from the spotlight at present. Though she has been rumored to be in multiple relationships in the past, there are no reports concerning her relationship status at present.

Having said that, it seems more like she is single in 2022, however, we hope that she reveals about her love life in the days to come.

Is Cosgrove Married To Nathan Kress?

While there have been a lot of rumors surrounding Miranda and Nathan’s relationship, the fact is they are not married nor they have dated each other ever.

Rumors of their relationship have been making rounds on the internet because of her onscreen chemistry in iCarly. The two are also seen meeting offscreen on numerous occasions, which has also dueled the rumors of their affair. But the fact is they are not romantically involved but are instead good friends.