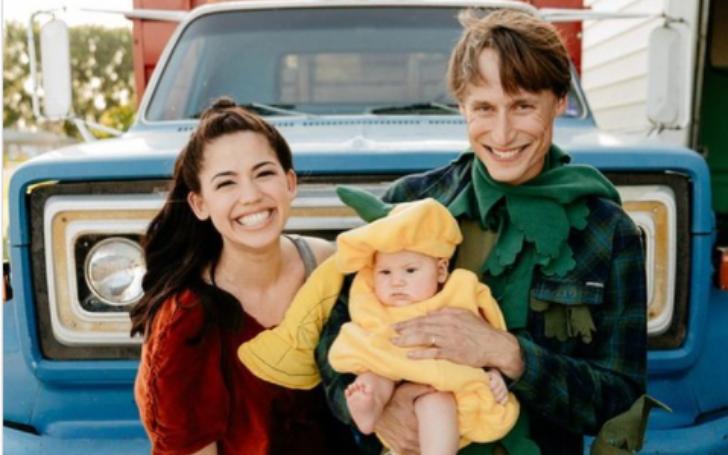 Molly Yeh became famous around the world after she starred in the Food Network series Girl Meets Farm. Since hosting the famed show, the Illinois native has somehow become one of the most talked-about celebrity chefs across the states.

Aside from her exceptional professional life, Molly leads a great life with her husband. Unlike Yeh, who has become somewhat a celebrity, her husband Nick Hagen is a farmer from Grand Forks. What’s more, she lives on her hubby’s family farm in North Dakota City.

We’re sure many of you are curious as to how did they fall in love? When did they marry? Do they share any children? Without further ado, let’s find out all the answers here today!

Molly married her husband Nick Hagen in December of 2014. They were in a relationship for several years before eventually deciding to settle for good. At the moment, the pair lives on Hagen’s family farm in Grand Forks, North Dakota. In close proximity, Molly’s mom Jody Yeh also lives.

Back at the farm, Molly spends her time playing around in the kitchen and with her chickens whom she has given names. She generally names her chicks with male pen names of renowned female authors. For instance, George Eliot (Mary Anne Evans) and Curer Bell (Charlotte Bronte).

Being an enthusiastic cook such as herself, she cooks a bunch of items for her husband and family. She is usually cooking with the ingredients that come straight from their farm.

The farm life has certainly brought forth positive and enthusiastic change into Molly’s life. Ever since moving to Great Fork with her boyfriend turned life partner, she authored a cookbook, landed a show with the Food Network, and the best part, she became a mother. It wouldn’t be an understatement to say she lives a high farm life.

What inspired Molly to move to a farm?

At first, when we first heard about Molly’s personal life, one thing made us all curious. What made Molly move away from the city life of Brooklyn to a small city of Grand Forks? Well, it was her husband Nick who managed to convince Yeh into moving to his family’s farm.

In her book, Molly on the Range, Molly mentioned that she and her hubby, despite living in New York, were ‘fierce inner homebodies.’ When they were living in NY, the couple used to spend their weekend inside or sometimes playing catch, which is quite contrasting to what a typical New Yorker does.

Back when Molly graduated from Juilliard with a degree in percussion, she faced a dilemma. To be a part of the orchestra she had been playing for some time or leave everything to pursue her passion in cooking. Ever since she started a food blog in 2009, Yeh discovered her true passion.

Thankfully, her boyfriend Nick was quite supportive of her choice and urged her to follow her passion for cooking. In addition, he even asked her to move in with him at his family’s farm. Talking about her decision to move, she told Glamour,

“When Nick brought up the idea of moving to the farm, I thought, Oh my gosh. I could spend my days blogging. And that was the moment when I thought that it really could become a real thing.”

And the rest, as they say, is history!

Molly and Nick welcomed their first child in 2019

On March 30, 2019, Molly became a mother for the first time. She gave birth to a beautiful girl. The pair named their first-born Bernadette Rosemary Yeh Hagen, who was 7 lbs., 6 oz at the time of her birth.

When you become famous for anything related to food, naturally we’ll ask what will your child’s first solid meal be, isn’t it? Similarly, when asked the same question by USA Today, Yeh said,

“I wanted it to be a vegetable; I wanted it to be something sweet. But “I’m not above jarred baby food, if it’s good ingredients, for convenience sake. I’ll make a lot of her food, but I will not be neurotic.”

Baby Bernie is quite lucky, tbh! Her mommy will cook her all the delicacies from around the world.

Besides, Molly often shares a lot of photos of her daughter on social media and frankly, we could have some more Bernie in our life. Her adorable daughter really brings out the best from all of us.

By the by’s, what is the backstory of Molly and Nick’s romantic love story?

Their relationship initiated in the simplest of manner. The duo were old classmates who reconnected a few years after graduating college. Nick was a trombonist for the college’s orchestra. After graduating college, he moved back to this native state of North Dakota to work at his family’s farm.

In her book, Molly on the Range, Yeh mentions she always considered Hagen to be a genuine, honest, and grounded person, kinda like an 80-year-old man in a 20 something man’s body.

Back when Molly reconnected with Hagen, she was fresh out of a relationship. Apparently, she had sworn herself off the boys. At one point, Nick had come to a Sunday-night quartet party alongside Molly’s best friend. Ironically, at the party, Molly set up Nick on a date with a writer friend of hers.

Nevertheless, it didn’t work out between Molly’s friend and Nick. Eventually, Nick asked her out on a bike ride date and they fell in love shortly after.