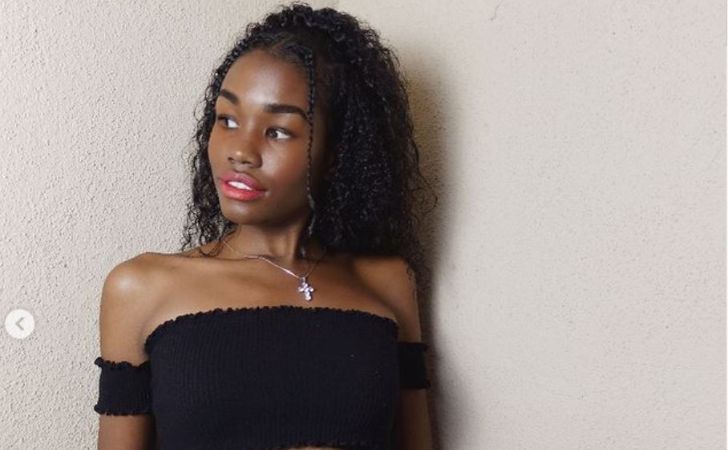 Paige Chestnut is an American model, who currently works under Wunder Management, a Los Angeles-based modeling agency. While she is known for her professional endeavors, she is also famous as the daughter of American actor Morris Chestnut. Her father is famous for his works in movies like Boyz n the Hood, Higher Learning, Half Past Dead, and numerous others.

Talking of Paige, she has worked in several commercials and has also appeared on the cover of numerous magazines. Want to know more about Paige Chestnut’s life as the daughter of Morris?

In this article, we are going to talk in detail about her career, marriage, children, and a lot more interesting facts.

Paige Chestnut Is The The Daughter Of Morris Chestnut

American model Paige Chestnut is the daughter of actor Morris Chestnut and Pam Byse. She was born on November 28th, 1998, in Los Angeles, California, USA. Her birth sign is Sagittarius.

While growing up, Paige spent most of her childhood with her parents in her hometown itself. She did her schooling at Calabasas High School and finished her graduation in 2016. Unfortunately, she has not revealed much about her college education.

To your knowledge, Paige is not the only child in the family. She has an older brother named Grant Chestnut. He was born in 1997 and is around a year older than her.

Unlike his father and sister, Grant is not into the glamour industry but is rather planning to pursue a conventional career. He holds grand academics and is a graduate of the University of Colorado. He has not started a career professionally but he is likely to pursue a career in advertising.

Both the siblings share a great relationship as well. In fact, Grant even wished his sister on her 21st birthday, posting a photo of him with Paige on his socials.

Career: She Is A Successful Model

Like her father, Paige Chestnut is also into the entertainment industry. She is not an actor but a model. As a model, she has been part of several commercials.

Not only this, but she has also walked runways for several designers. Back in 2017, she walked the LA Fashion Week for a designer named Issac Newton. Currently, she is signed to Los Angeles-based modeling agency named Wunder Management.

Her Father Is a Successful Actor

Paige shares a great relationship with both her parents. Her father Morris is a renowned actor and has appeared in over 50 movies. He made his film debut in 1991, in Boyz n the Hood, where he appeared as Ricky Barker.

Some of his most successful works include Under Siege 2: Dark Territory, The Fugitive, Scenes of the Crime, Breakin’ All the Rules, Kick-Ass 2, and numerous others. Likewise, he has also appeared in TV series like Rosewood, Goliath, The Enemy Within, Being Mary Jane, to name a few.

As a daughter, Paige shares a great relationship with Morris. Back on August 3rd, 2018, Morris even shared a photo of his daughter on his Instagram. In the beautiful photo, Paige wore a beautiful yellow dress.

Not only her father, but Paige also shares a loving relationship with her mother Pam as well.

There are very few in the entertainment industry who have a relationship like that of Paige’s parents. In fact, her father and mother are an inspiration to many who end their relationships just a few years into marriage.

Just for your knowledge, Morris and Pam are married since 1995. It has already been over 25 years and their relationship seems as strong as ever. Rather, their bond as a husband and wife seems to be getting even stronger every day.

They met for the first time back in a club in Atlanta and have been together ever since. In an interview with Essence Magazine in 2014, Morris even revealed how Pam has been the best wife and mother to their kids. He said,

“When I met my wife, there were a lot of qualities I was paying attention to, I knew that she would be a great mother just for how she cared for her nephew and her family. She respected her mother and she respected her family and those were some of the initial qualities that I saw that I thought would make her a great partner.”

Is Paige Chestnut Married Or Dating A Boyfriend?

Like with any other star kid, the question about Paige’s love life is pretty much prevalent in the media. There are many who are curious about whether she is married. Well, the fact is that she is not married yet.

Also, her social media post does not hint about her being in a romantic relationship. For now, since she has not made any public claims of her love life, it is best to wait until she reveals her relationship status herself.