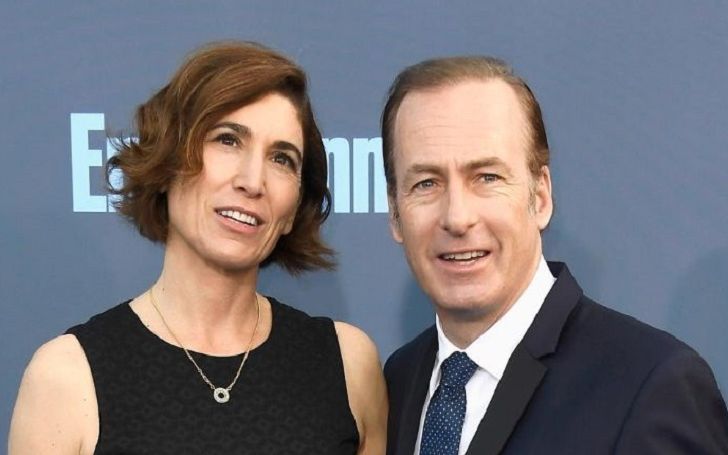 Naomi Yomtov (aka Naomi Odenkirk) is a skilled executive producer who has already worked for a handful of movies and TV shows. But, Naomi is widely known as the wife of one of the distinguished actors Bob Odenkirk. Her husband made a major breakthrough following his charismatic character of crooked lawyer Saul Goodman on one of the most-viewed and cult-hit AMC crime drama Breaking Bad.

The couple, who has been married for over two decades is also blessed with two grown children. Besides, Naomi now serves as a talent manager for her hubby.

Well, we’ll try to find out all the details of Bob Odenkirk’s wife in the sections to follow. So without further ado, let’s jump right in!

How old is Naomi Yomtov? Her Early Life

Naomi Susan Odenkirk’s age is 55 as of 2022. She was born and raised in the United States of America. She has remained quite secretive when it comes to her early details including her parents, childhood, and more.

Besides, as far as her nationality is concerned, Naomi is an American.

Who is Bob Odenkirk’s Wife Naomi Yomtov? All About Her Professional Creer

Yomtov is a producer by profession. She landed her first gig as a producer in the film adaptation of Michael Blieden‘s stage play Pyro-Giants!, Melvin Goes to Dinner. In 2006, Naomi worked as an executive producer for two short projects Derek & Simon: A Bee and a Cigarette and The Pity Card. She gained early attention after producing dozens of episodes of the TV series Derek and Simon: The Show.

In 2009, Yomtov worked as an executive producer for the cable television comedy series Atom TV. The same year, she went on to produce the television mini-series Comedy by the Numbers. Her other TV credits include How to Cheat on Your Wife and Let’s Do This!.

Furthermore, Yomtov worked for a 2015 comedy sketch show, W/ Bob & David, which was created by her husband Bob Odenkirk. Besides, she also worked on three short on-screen projects; It All Makes Sense, The Skeleton Twins, and Ass Backwards.

Yomtov is now a Manager for Her Husband Bob Odenkirk

Besides being a producer, Naomi serves as a manager for her husband of over 24-year. When WSJ Magazine‘s interviewer asked Bob if it was difficult to have a wife who’s also a manager,  the actor replied it is hard indeed. He said,

“Yes, it’s hard. We figured it out years ago, but it was very hard for a long time. Your manager’s job is to have opinions on the work you want to do and help you make choices and maybe be, in the case of Naomi, a really smart, informed person with a point of view. But as an artist, you get a lot of input. You write a script, people read it, they say, “This is good. That’s not good.””

“You want your wife or your partner, to care about how it’s making you feel and not the thing itself. If I said to Naomi, “Oh, I wrote this pilot. I turned it in.”

Naomi has likewise worked for a few other comedy stars like Kristen Wiig, Bill Hader, and Derek Waters as well.

Besides, in a 2014 interview with Playboy, Naomi talked about her hubby’s role as Saul in Breaking Bad. There she said,

“He didn’t write it; he didn’t create it. He had to come to terms with a paradigm shift of his career from a director and a creator of comedy. It was interesting to see him embrace an opportunity like that and go with it … He had to see himself through different eyes.”

Bob also reprised the character on its spin-off Better Call Saul, sharing the screen along with Rhea Seehorn, Jonathan Banks, and more. Just for a fact, the series also stars Tony Dalton, Kerry Condon, and others. His breakout performance in the highly-acclaimed project also brought him four nominations for the Primetime Emmy Award.

The duo met for the first time during one of Bob’s comedy shows in West Hollywood back in 1994. Although Bob seemed he was “disinterested” in her for some time, Naomi fell in love with Bob at first sight. Even years after their marriage, Naomi reminisced how she used to talk about her crush on him with several people who had also offered to introduce her to him, but she declined.

Naomi and Bob came across again outside a comedy club in Santa Monica, it was where that Odenkirk eventually started noticing her. She said,

“I didn’t know why he finally noticed me. It’s not like I suddenly became his type. I still don’t think I’m his type, but we get along great.”

Bob and his wife Naomi exchanged their vows in 1997, in a low-key wedding ceremony. The couple was in a relationship for around a year before they walked down the aisle.

Its’ been over 23 years since the enduring lovebirds are married and their relationship still sailing smoothly without any conflict.

Besides, Naomi has been Jewish since their nuptials.

Naomi Yomtov is the Mother of Two Children: One is a Producer

Bob Odenkirk’s wife gave birth to their first child, a son Nate Odenkirk in late 1998. He is now a producer of Original Content at Audible, Inc. He also serves as a satire writer for The Inquirist Magazine. Talking about his education, Nate studied at Oberlin College. He then went on to study at DePaul University, graduating with political science in the American Government and Politics in 2021.

The duo welcomed their second child, a daughter Erin Odenkirk in 2000.

Net Worth of Naomi Yomtov

The celebrity spouse has earned quite a good fortune from her various works. Her estimated fortune is $500,000. In the meantime, Naomi Yomtov’s husband Bob has $16 million in net worth.