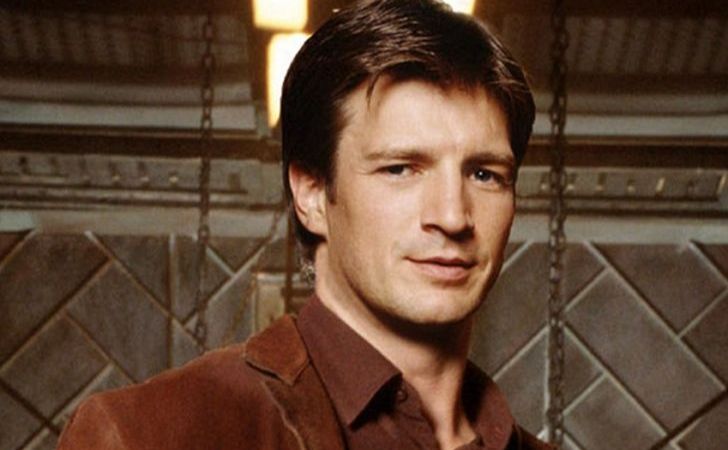 One of the prominent faces of the entertainment industry, Nathan Fillion has been keeping his love life secret for the past few years. But the handsome hunk with a towering height has been romantically linked to several girlfriends in the past, one of them which is Felicia Day.

Now the big question is, has he married anyone of his girlfriend? If yes, then who is Nathan Fillion’s wife? Let’s find out the actor’s current marital status. Let’s also find out about his past relationships.

Who is Nathan Fillion’s wife? Is he secretly married?

Nathan Fillion is not married yet. Although the actor is in his late 40s, he is yet to find his better half. But Fillion has played on-screen husband a couple of times. One of those times was in the television series, Lost where he briefly married Kate Austen (played by Evangeline Lilly) in the show’s third season.

He played a police officer named Kevin Callis in the series and his marriage ended shortly. Even though Nathan is a bachelor, he has already dated a number of women in the past. Let’s take a close look at his dating history.

Relationship with Vanessa Marcil: Rumor of their engagement

Nathan Fillion had a short-lived romance with General Hospital actress Vanessa Marcil. The couple started dating in mid-1995. As per Ranker, the two also got engaged after a few months of their relationship. But neither party confirmed the reports.

They reportedly broke up later that year. The actress afterwards married Carmine Giovinazzo.

Nathan was in a relationship with Reeves during the mid-2000s. The two always remained very secretive about their romance.

Sources say the couple began their lovey-dovey back in 2005. They sparked romance rumors after stepping out together at the Universal Pictures’ Premiere of Serenity on September 22, 2005, in Los Angeles.

Apparently, both of their careers was taking off at the time and both of them were not able to spend as much as they should. Due to this reason, the former couple couldn’t remain together and went their separate ways in early 2009. They separated on mutual understanding and are still good friends.

Fillion was also linked with Felicia Day: How did it all Begin?

Nathan Fillion had a very short-lived romance with The Guild star Felicia Day. The two first met after they appeared together in the web series Dr. Horrible’s Sing-Along Blog in 2008.

They dated for a while but neither Fillion nor Day revealed for how long they remained in a romantic relationship. In 2018, they also worked together on the series, The Rookie.

His Relationship with Kate Luyben

Although many of Nathan’s relationships ended short, he never seemed to have a problem with that. Rather he kept on engaging in a romance with a number of girls. One of his short-lived romance was with actress Kate Luyben. According to some sources, the two began seeing each other in 2010.

On 13th September 2010, the couple walked the red carpet together at ABC’s “Castle” Season 3 Premiere Party in Los Angeles. They subsequently attended several other major functions together. Fillion and his then-girlfriend Luyben posed for Los Angeles Times on 29th August 2011.

There is no doubt the two enjoyed their togetherness for over a year, however, the ex-lovebirds never revealed when they decided to end their romance.

Actor Nathan Fillion was romantically linked with actress Christina Ochoa. They were speculated to be an item after they made a couple of joint appearances. The former flame never reveals anything about their relationship.

In late 2013, the two appeared at the Thor 2 premiere together. After the event, many of their fans believed they were indeed dating, however, further details about their romance is under the media radar as of yet.

The actor first met Mikaela Hoover while both of them were working in the comedy, Super (2010). Fillion played The Holy Avenger while Hoover portrayed Holly on the project.

There are reports the pair began dating in early 2013. They made their first red carpet appearance at the 65th Emmy Awards in Los Angeles on 22nd September 2013. As per Ranker, the two also got engaged in November 2013, but they called it off in early 2014.

Apparently, neither of them has confirmed whether the two ever engaged or not.

Talking more about Nathan’s past relationships, the man also dated Krista Allen. The couple first met while Allen made a guest appearance on the ABC series Castle in October 2014.

A source close to the couple, at the time, said, “Krista did a guest spot on an episode entitled Last Action Hero”

Source added, “They were both single and they hit it off. Since then, they have been spending every spare moment together and they are even talking about moving in together.”

Nevertheless, their romance faded away shortly.

Besides, Krista is the mother of a son, Jacob Nolan Moritt, whom she gave birth with her ex-husband Justin Moritt, a production manager. The couple married from 1996-99.

The actress was also in an on and off relationship with George Clooney (2002-06). For the second time, Krista tied the knot with Mams Taylor, a rapper in October 2010. The two also separated after a few months of their marriage in April 2011.

As per Screen Rant, Nathan Fillion also dated his TV wife Stana Katic for a while. The two first came across after they both joined the series Castle in March 2009.

While the actor played the main role, Richard Castle, Santa portrayed detective Kate Beckett on the series. A source close to the ex-couple told they had a romance outside the reel.

They even married in the sixth season of the show. Despite the early chemistry, multiple sources say the pair had feuded behind the scenes and they are not on good terms.

While talking about his current relationship status, Fillion is possibly single at this moment.

Who Is Felicia Day husband? Facts Surrounding Her Love Life