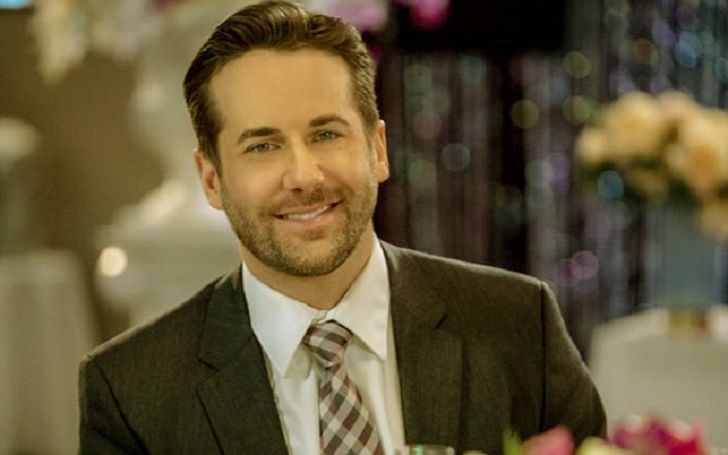 Niall Matter is a successful actor in Hollywood. The actor who went through some awful circumstances has become an inspirational figure for all of us. Actor Matter had a dreadful accident while working on an oil rig which had a severe impact on his limbs. He did a lot of physio to be able to walk again.

Despite that, his ambition and passion for acting always remained on the top. Besides, the Hollywood heartthrob, who has dozens of acting credits under his belt, has been leading a wonderful married life with his wife of five years. The loving duo shares two children too.

Here are numerous interesting things that you didn’t know about Niall, including his early life which he spent on a dairy farm. Take a look!

Does Niall Matter have a brother? His Family Details

Niall is from Edmonton, Alberta, Canada. He was born on 20th October 1980 to farmer parents. Matter has a brother named Trevor. He grew up in a working-class family. They had their own dairy farm.

Besides, talking about his ethnic background, Matter is of Irish and Russian descent and has dual nationality American and Canadian.

Spent 8-year on the Oil Rigs

Before segue into acting, Niall worked on the oil rigs in Northern Alberta for eight years. He began working on the oil rigs at the age of 17, where his grandfather and brother were working.

In the meantime, Niall was also taking acting lessons at Vancouver Film School. He never thought of acting until a drama instructor advised him to take drama as an elective course instead of mechanics in his high school.

What Happened to Niall Matter? Nearly Lost His Life

While working on the oil rigs, Niall met a horrific accident. The then-15-year-old told My Devotional Thoughts,

“I had a really bad accident the year I turned twenty-six–I was twenty-five when I had the accident.”

In another interview with Chicago Tribune, the third-generation oil rigger said that he was almost killed while cruising inside the cab of a 17-ton drilling rig.

“They had to rip me out of there. It was pretty awful. It was horrific actually. I got to the hospital and the doctor immediately wanted to amputate my right leg. In the end, I was able to remain intact and go through extensive physio to be able to walk again.”

It took around a half-year for the actor to fully recover from the wounds. He had to go through extensive physiotherapy to walk again.

Soon after his rehabilitation, Niall moved back to the work in the oil rigs but it wasn’t a week before he saw another horrific accident and then eventually decided to quit the job.

Niall kicked off his acting career playing Trent Hamilton on The Best Years in 2007. He then went on play the role of Lieutenant Kemp, a USAF airman on the Syfy TV series, Stargate Atlantis.

The actor started making quite a name in the industry with his role in the Sci-Fi Channel series Eureka. His other hit TV projects soon followed like Loch Ness Terror, Warehouse 13, Primeval: New World, and more. He appeared in three TV shows Arctic Air, Motive, and Constantine in 2014. In the next few years, Niall popped up on several TV shows, most notably in The Good Doctor, and Engaging Father Christmas as well.

Besides, Niall has performed in a handful of movies. He landed his first big-screen role in the comedy Dr. Dolittle Tail to the Chief in 2008. A year after that, Matter went on to portray Byron Lewis in Watchmen.

Furthermore, the actor has also performed in a number of Hallmark movies. He snagged the role of surgeon Dr. Clay Castleberry in the Hallmark Channel original film Stop the Wedding. Other Hallmark films that Nial has appeared in are Finding Father Christmas, When Calls the Heart, Love at First Dance, among others.

Niall and Sara Matter Wedding: How Long Have They Been Married?

The beautiful couple Niall and Sara Matter tied the knot in early July 2016. Their hush-hush outdoor wedding ceremony took place in Kauai, Hawaii. He announced the big news via Facebook by posting an adorable photo of themselves from their big day.

It’s been over five years that the couple has been married and their love for each other still looks pretty strong.

Niall has two Children With His Wife

The two welcomed their first child, a daughter the same year they tied the knot. Back in November 2017, when the interviewer asked him how the actor has handled his family and professional life. Niall replied My Devotional Thoughts saying,

“I want to really enjoy this time with my wife and daughter and work on things that I want to work on. But not overdo it. I used to really overdo it and burn my candle at both ends so to speak. And things just change when you have those responsibilities. Obviously, I had the responsibility of providing for my family, so I can’t take too much time off. But I definitely have been taking time off to help with my daughter and make sure that my wife is happy and that the family is doing well.  At the end of the day, that’s our legacy. That’s what we should be doing is taking care of our families.”

In 2018, Niall Matter’s wife gave birth to their second child.

The family of four currently resides in Los Angeles.

What is Niall Matter Net Worth?

Matter has an estimated net worth of $4 million. He has racked such a good amount of fortune from his work in both movies and TV shows.

Who Is DaBaby Girlfriend In 2022? Details Surrounding His Wife, Affairs