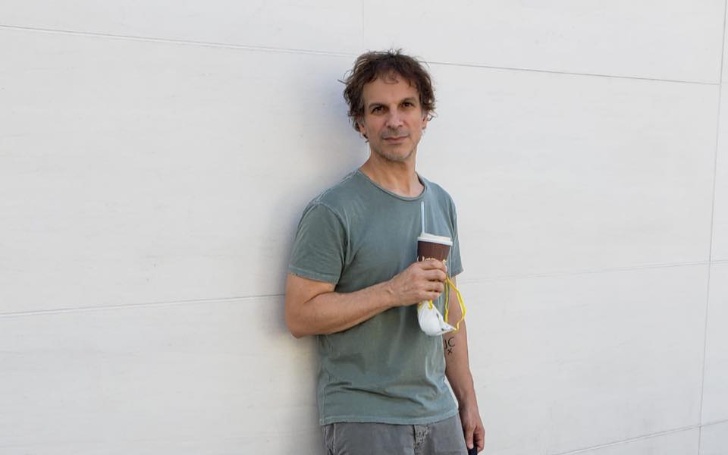 Nick Cokas is an actor and producer known for his work in the 1989 movie Wild Orchid and the 2005 TV series Invasion. More than his profession, he is mostly identified as the ex-husband of an American singer, songwriter, and actress Katherine McPhee who rose to prominence as the runner-up of the fifth season of American Idol.

Nick and Katherine were married for 7 years and ended their relationship on a bad note. After their separation, his ex-wife had a brief affair with Scorpion co-star Elyes Gabel and later got married to a Canadian musician. In 2022, Nick Cokas is also married. Well, then who is his wife?

Today, this article will talk about every personal & professional detail of Katherine McPhee’s ex-husband, Nick Cokas.

Who Is Nick Cokas? Know His Age And Wiki

As of 2022, Nick is 57 years of age. He was born on April 11, 1965, in San Francisco, California, United States under the birth sign Aries. He grew up in his hometown alongside his parents and had a decent childhood.

As for education, he went to Mills High School. For further study, he completed a Bachelor’s in arts at the University of California. He again joined Pepperdine Graziadio Business School in the year 2019 for an MBA degree and finished the course in 2020.

Besides, he belongs to the British-Irish ethnicity and holds American nationality.

Nick Cokas Is Now A Value-Brand Expert Plus Strategist At Cokas Corp: His Career Detail

Talking about his professional career, Nick has a long list of experience working in Hollywood as well as in the business field. Apart from this, he served as a volunteer in different organizations in his country. Let’s talk in detail regarding his wide working areas.

As we said above, he is a value-Brand expert and strategist in a business consulting and service company Cokas Corps. He has been working in this company since January 2005. Before being a Brand expert, he served in the position of Global Marketing Specialist at Cokas Corps. Further, as per his LinkedIn, Cokas is also a founder and director of The YOU Effect located in the San Francisco Bay Area.

Nick also has been involved actively in some humanitarian works. From 2006 to 2008, he volunteered at Children’s Hospital Los Angeles. Further, he has served as a volunteer strategist at St. Jude Children’s Research Hospital, & as a Fundraising consultant at The Salvation Army.

Moreover, he has been a volunteer at Feeding America, Malaria No more, and Build On.

Nick Is Also Famous As A Broadway Actor

In acting, his major credits are his involvement as a performer in the 1993 musical, Blood Brothers. Later, in December 1996, he joined Once Upon a Mattress, a musical comedy with music by Mary Rodgers. Moreover, Nick appeared as David Paxton in the 2005 TV series Invasion.

Additionally, he is also into production work. He was a post-production assistant in the 1989 movie Wild Orchid. Likewise, he produced a short film named Le Chase.

The Invasion actor was married to a former American Idol contestant Katherine McPhee for 7 years. The couple walked down the aisle on 2 February 2008, at Beverly Hills Presbyterian church.

They has a grand wedding, in a greek style in front of 305 guests and the wedding venue was decorated with pink and ivory rose petals. During the bridal entry, the venue resonated with the sounds of bagpipe music in the background. They together oathed with Christian rituals and later they had a huge wedding reception at Vibiana’s in Los Angeles.

Nick And His Ex-Wife Katherine Met In 2005

The former married duo met for the first time when they were doing the show called The Ghost and Mr. Muir. Eventually, they became friends. After that, Katherine went for an American Idol audition, and on her Idol journey, they were together.

The Couple Separated After 7 Years Of Their Marriage

Till the year 2013, Nick Cokas and his partner Katherine seemed to be on good terms but eventually, their relationship started deteriorating. The news of their separation hit on the media after McPhee was spotted kissing Smash director Michael Morris in the month of October 2013.

As mentioned above, Nick’s former wife, McPhee was photographed kissing the director. Regarding this, McPhee had stated that, at the time when she kissed another man, it had already been seven months that she was living separately from Nick.

But by denying her statement, Nick filed a divorce case against her with a claim that they separated seven months after the kissing incident. He also claimed that he has enough evidence to prove his point.

Later, sources even reported that the couple is trying to save their relationship which proved to be just a rumor and, Nick and Katherine parted their ways forever. Well, following the divorce, Nick got spousal support of $700k.

Cokas Is Now Married: Who Is His Wife?

At present, Katherine McPhee’s ex-husband Nick is happily married to his wife named Roxane Hayward who is an actress at APM- Artistes Personal Management. The couple was engaged in the year 2021 and on Aug 21, 2021, his now-wife Roxane also made a beautiful post with Nick on her Facebook captioning,

Ooooo, that sounds so nice!!!! Joy, exhilaration, bliss… I don’t know how to begin to express the pure ELATION I am feeling! The happiest moment of my life, surrounded by our incredible friends (who were all in on the surprise… you sneaky bunch you)! I love you Nick, everything for which you stand, and everyone who stands around you. You’ve made me the happiest person to ever exist! My fiancé!

On the occasion of Roxane’s birthday on May 7, 2022, Nick wished her on his Facebook account with a caption,

On the other hand, his ex-wife, Katherine McPhee is now married to 35 years older Canadian musician David Foster and shares a son with him.

Does Nick Has A Child?

In 7 years of marriage with a singer Katherine, he did not have any children. And at present, he has just started his new marital journey with his new love. So, there’s a time for him to become a father.

Apart from Insta and Facebook, he is not active on other social networking sites.

As we said before, Nick is working as a value-brand expert and strategist in the company named Cokas Corp. Further, he also owned a company & is also an artist. From this, we can say that he has huge sources of income from which he undoubtedly has earned a lot of money.

As per reports, he has an estimated net worth of $6 million dollars.