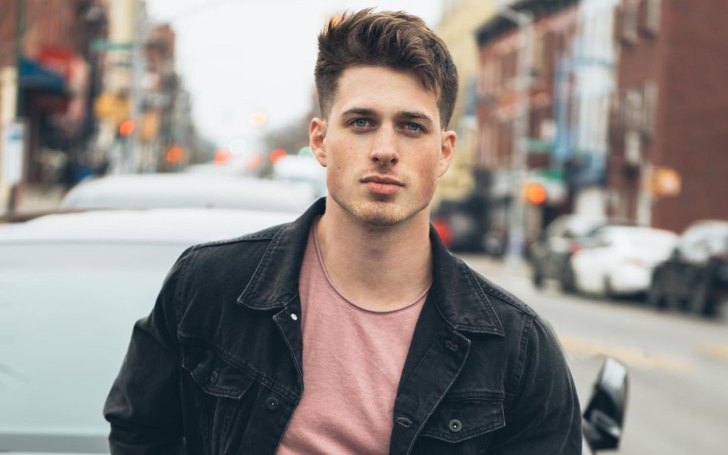 Nick Sandell is an American model, aspiring nutritionist, and fitness trainer who became popular for his dashing physique, which also helped him to get the title of the sexiest man from several magazines.

Likewise, Nick is the owner of a personal training company and multiple e-commerce businesses. So, how does an aspiring entrepreneur become the top model in America? His rise to stardom. In the meantime, also know about the sexiest man’s love life. Is Nick dating his girlfriend in 2022?

Today, this article will include the successful journey of the personal trainer Nick Sandell along with his birth details, family background, and his relationship.

When Was Nick Sandell Born? Know About His Early Life

Nick was born on August 9, 1993, in New Hampshire USA. So, as of 2022, he is 29 years of age. He grew up in his hometown along with his mother and sister whose names are unknown. Apart from this, there is no information available about his father and the rest of his family members.

Now, talking about his education, as per sources, Nick studied the subject ‘Exercise Science’ at the Manchester Community College. Prior to his enrollment in Manchester, he completed high school in his hometown.

Besides, he holds the American Nationality and belongs to the Caucasian ethnicity.

Sandell Has A Sister

For those who want to know about Nick’s sibling, let us tell you, that he has a sister whose name is yet to reveal. Not too often but sometimes, the fitness model keeps sharing some videos and photos with his sister on his Instagram.

On December 10, 2020, Nick posted a video on his sister’s birthday, captioning “Happy bday Sis!!!,” where both of them seem close to each other enjoying birthday cake. Likewise, on February 27, 2019, Nick posted another video with his beautiful sister with the caption “We are weird & that’s that (We get it from our Mother) 😂🎎🎏.”

Seeing this, we can assume that the brother-sister duo has a good family bonding and enjoy being with each other time and again.

Moving on to his profession, Nick has been professionally involved in multiple aspects like as a trainer, nutritionist, entrepreneur, and freelance model. But, he is most famous for his modeling career as he has modeled for numerous underwears and nutrition brands.

Among many of his modeling works, Nick Sandell is most highlighted for his work in Calvin Klein’s underwear campaign. Further, he also signed as a sponsored model for the nutritional brand named Six Star, which he has promoted on his Insta page too. Besides, Sandell is into naked modeling, where we can see a number of his naked pictures on his social media account.

Moreover, he worked with Myprotein, an E-commerce company that delivered sports Nutrition. Side by side, Nick owns a company named Model Trainers, which provides a worldwide online training service. In addition, as per Nick’s LinkedIn account, the model owns a company Sandell Fitness LLC in New York, US.

An underwear model and a personal trainer, Nick is currently in a relationship with his model girlfriend named Jacki Magno. He often posted romantic moments with his girlfriend Jacki on his Instagram. The last post that he posted with his partner on his Insta account was on January 4, 2022, with the caption “My Mona Lisa baby @xoojacki.”

His relationship with Jacki became official when he posted his picture together with his girlfriend on September 18, 2021, captioning,

We complete each other. And we are working on telling each other how we feel. I would encourage all of you do the same with the people you love! Jacki, I just want to say I’m so grateful for you. You are love.

Hence, it is safe to say, the romantic couple has been dating each other for about a year now.

Before his current partner, the dashing model Nick had already gone through two failed relationships. He has talked himself about his past affairs on his Youtube channel Nick Sandell‘s video called ‘MTV Casting- My Past Relationship.’

However, Sandell hasn’t revealed the names of his former girlfriends.

Nick’s Physical Appearance Is A Credit To His Rising Fame

As we said earlier, Sandell who has a height of 5ft 10 in is more famous among people because of his physicality. As per Sandell, he used his Instagram just to promote his personal brands but within a year, he gained a rapid increase of followers.

In his exclusive talk with Observer, Nick said,

I’ve got that all-American look that most people are attracted to—and today receives many business requests through Instagram, either for modeling opportunities or new personal training clients.

However, just an outer look is not enough for a person to be successful, he/she should be skillful enough to handle all the success and move further. And it won’t be wrong to say Nick is talented and skillful in his work which is why he is accumulating a wide range of fame in his platforms.

Nick is much active on Instagram under the username @nick_sandell with altogether 319 posts and 1 million followers. In his Insta account, he keeps sharing his modeling career along with some personal moments. Likewise, he is also on Facebook with his own name. He has 18k followers on his FB account.

Furthermore, we can see Nick on TikTok too under the username @nick.sandell_. Till today, he has got 7.7M views on his TikTok videos. Also, he is on Twitter @n_sandell with 25.8k followers.

Additionally, Sandell has 1.42k subscribers on his Youtube channel, where he has uploaded just two videos 7 years ago.

What Is The Net Worth Of Nick Sandell?

As already mentioned above, Nick, at such a young age is working as a model and trainer. Besides, he owns his own company too. So, undoubtedly, the multi-talented personality has made quite a good fortune.