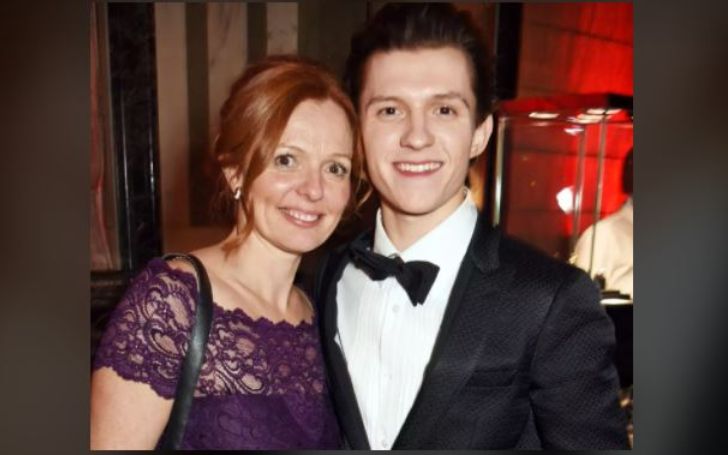 Nicola Elizabeth Frost or simply Nikki Holland is an English photographer, a philanthropist, and the mother of Spiderman actor, Tom Holland. Holland’s mother, Nicola is a woman of artistic skills.

She, however, has become more popular for her bondage to her eldest boy, Tom. In fact, one could say not only her but the whole member of the Holland clan’s career primarily started only after Peter Parker actor made it big through his web-slinger character.

Nikki nonetheless is a reputed camerawoman in her own right. Behind the scenes, she is also a wife to another media personality, the father of Tom, Dominic Holland. Know more about the woman who birthed and raised the popularly beloved awesome star who is now famously playing the friendly neighbor.

Who Is Nicola Elizabeth Frost? Her Bio

She is the daughter of Robert Walter Frost and Christina Winifred Berry and allegedly the granddaughter of Walter Frost and Fanny E. Brown. While Frost is yet to reveal if she is a single child or has siblings, what’s known is many of the men in her family are carpenters.

Later her eldest son, Tom would also take to the trade. She suggested he learn a Plan B skill in case the whole acting thing didn’t pan out. Nikki, therefore, urged the Uncharted star to take a course in carpentry, just in case his movie career hit a rough patch.

She also took him to his first ballet class as well as his last dance class. Nikki, who is currently 54-year-old, thought he could dance since he used to dance to the Janet Jackson song she’d play when he was a baby.

Frost married Dominic Holland, a comedian, and author in Sep 1994. The former has often disclosed the date as her wedding anniversary on her Instagram, Nikki Holland Photography.

Elizabeth met Dominic at Leeds University where both of them were students; the latter was then studying textile.

In addition to being an author and comedian, Nikki’s spouse is also a broadcaster. He once performed standup at the Edinburgh Festival in 1991.

He afterward went on to win the Perrier Best Newcomer award at Edinburgh. Over the years, Nikki’s husband returned there many more times to perform. Some of Dominic’s notable books include Only in America, The Ripple Effect, and Eclipsed.

The latter was written to chronicle his and Nikki’s first son, Tom’s meteoric rise to fame while contrasting it to his success.

She Has Four Sons

Together, Nicola Elizabeth Frost, and Dominic are parents to four actor-children. They had the most famous one, Tom, in June 1996, after which they welcomed the twins, Sam and Harry in Feb 1999. Their fourth and the youngest one, Paddy was born in Dec 2004.

Almost all of the sons are into the film career one way or the other and each one has had their times on the screen as well.

Nicola Elizabeth Frost Didn’t Like This Film Of Her Son, Tom Holland

Apparently of all the Tom films, the five-foot-four or something inches tall, Nikki didn’t like this particular character or rather a scene of her son.

In an interview with Esquire in Feb 2021, Tom revealed he sent a snippet of his 2021 tragedy drama film, Cherry to his mom, and as expected of a mother, she was deeply upset.

Cherry, the film by the director brothers, Joe and Anthony Russo is a crime drama that features Nikki’s son Tom as an Army medic that returned home from the Iraq war with PTSD and soon develops a heroin addiction.

When the senior of the Holland brothers sent his mom footage from the film in which he touches himself in a prison cell, he didn’t get the reaction he expected.

Tom later explained he didn’t commit the act sending the scene to his mom in his right mind. He also expressed remorse on his initial thought,

‘Do you know who would really like to see this? My mum.’

He said it was a really stupid thing to have done. The Far From Home star revealed his mother also didn’t like the sight of her son playing such a critically severe role. Holland refers to that decision of his as the “Biggest mistake ever.”

Tom Holland Credits His Success To His Mom, Nicola

Tom has said it, time and again, that he loves his photographer mother.

During an appearance on The Late Show with Stephen Colbert, the young adult let everybody know just how much of “an amazing lady” his mother Nicola Frost is.

“I owe everything to my lovely mom. She did everything for me growing up when I was going for auditions….My mom’s an amazing lady,”

the actor declared with the host Colbert. The London-born star says his mother is also his best critic.

And despite his fame, Nikki still gives him notes on how to read his lines right and reminds him about the stretches he needs to do before he starts playing little stunt man.

Nicola Elizabeth Frost Set Up A Charity Organization For Her Sons

Nikki and her husband Dominic are also responsible for starting a charity-centric company The Brothers Trust which uses Tom’s fame to shed light on charity organizations that need help and publicity.

The Holland couple launched the organization in 2017 of which Tom is the focal point of all the fundraising efforts. All the other children of Nicola and her spouse nonetheless support their eldest brother.

Using Tom’s reach and popularity, the trust occasionally aims to run a number of events each year, and the funds that they raise go to charities that the Holland family supports.

The trust especially is keen to shine a light on charities that struggle to gain ground in the competitive not-for-profit sector.

The Brothers Trust also support those group who can best demonstrate the most effective use of funds to profit the people in need and not on bloated administration.

Is Nicola Elizabeth Frost As Rich As Her Son, Tom Holland?

Nikki’s son, Tom didn’t take long to become one of Marvel fans and Hollywood’s favorite actor to helm the role of Spider-Man. But what’s more interesting is Nicola’s this son took an even shorter time to be a part of billion-dollar movies.

It’s quite admirable of Holland jumping from a $250,000 paycheck in the 2016 Civil War to over $10 million fees in 2021, No Way Home. And there hardly could be an argument with regards to the estimation of his net worth which is currently resting over $18 million.

In light of the aforesaid undertakings, it seems less likely that Nicola is anywhere as rich as her son no 1. Though that shouldn’t be a question to talk about in the first place considering the Avengers actor has often made it clear his parents are pretty much above anything else to him.