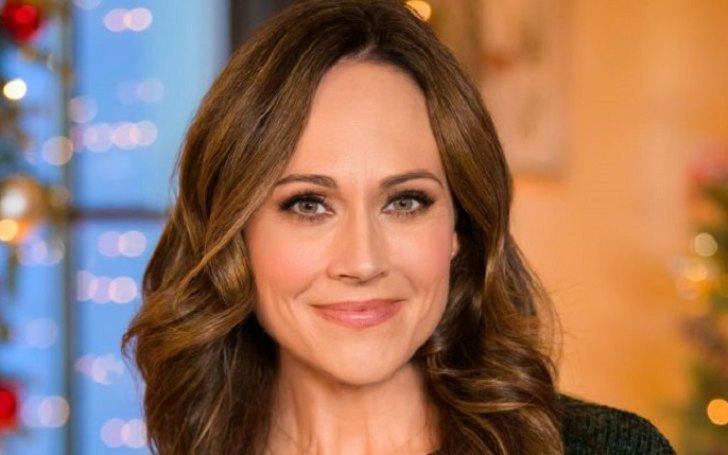 Actress Nikki DeLoach gained early attention after her performance in the TV show The All-New Mickey Mouse Club (1993-96). Her diverse career made a major break when the actress snagged the role of Lacy Hamilton in Awkward (2011-16).

Windsor is also a doting mother of two children with her musician husband Ryan Goodell. With their marital relationship that has lasted for over a decade, DeLoach still shares an incredible bond with her hubby Goodell.

Here are many unheard facts of Nikki that you didn’t know. Let’s take a look!

Is Nikki DeLoach Married? Who is Her Husband?

DeLoach tied the knot with Ryan Goodell, on 5th Sep 2009. The couple wed in a low-key ceremony which was attended by their loved ones.

Besides, the Minneapolis native graduated from the University of California, Los Angeles.

A rep for the actress told that the baby boy weighed 6 pounds and 15 ounces and 21 inches in height. They announced they were expecting their first child in April of the year.

It was really a heartbreaking moment for the couple when it was found out that their then second unborn child Bennett had multiple heart defects and might not survive. The actress, who was five-month pregnant at the time told a detailed story to People.

The child was born on the 20th of Sept and the very next day they headed to Children’s Hospital Los Angeles (CHLA) in hopes they could save his life. Bennett underwent surgery on 25th Spet. By the grace of God, nothing bad could happen and all credits of the child’s successful procedures that most kids do not survive go to accomplished cardiothoracic surgeon Vaughn Starnes.

The Family of Four Resides in L.A. With Their Dog

DeLoach currently lives in Los Angeles, California with her husband, two kids, and a puppy. They have been calling their pet pooch Windsor.

We’ve come a long way since Sept. 20th. So thankful for being able to take the oxygen off Baby Bennett long enough for a family stroll this morning. Thanksgiving Day never meant as much as it does today. Thank you God for the miracle that exists in this moment. 🙏❤️ #thanksgiving2017🦃

DeLoach’s Instagram page is filled with a series of family photos.

The actress previously was in a long relationship with pop star J.C. Chasez. The former couple first met when the actress joined the All-New Mickey Mouse Club in 1993. Chasez is a former member of boy band*NSYNC. She used to go by the nickname Peaches too.

The two dated for five years but they never revealed when and how their relationship came to an end.

Who Are Nikki DeLoach Parents?

DeLoach was born in Waycross, Georgia, on 9th Sep 1979. She is the daughter of Terri DeLoach and David DeLoach. Her mother Terri is a former superintendent of the Pierce County School. Her father David owned a wood products company.

The family also runs their own farm business. Nikki is of American nationality and white in terms of ethnicity.

Nikki DeLoach’s Father Is Fighting With Alzheimer and Dementia

DeLoach’s dad David, 66, has been suffering from Alzheimer’s disease and dementia for nearly a year now. On 17th June 2019, the actress revealed the critical situation with a lengthy emotional message on her Insta.

Nikki also suggested Alzheimer’s Association (@alzassociation) on the post for those who would like to know more about the disease.

Nikki grew up with two younger siblings; a sister named Leanne DeLoach and a brother named Brett DeLoach. Her sister graduated from the Valdosta State University of Georgia.

Brett is a basketball player who currently plays for the University of Georgia. They grew up on a farm in Georgia.

Is a University of Maryland Graduate

As per sources, DeLoach attended the Pierce County School, where her mother was a superintendent. She then went on to enroll at the University of Maryland and obtained a degree in Psychology and English in the spring of 2012.

Nikki Had a Strong Passion for Modelling

DeLoach developed an interest in the entertainment business at age 8. She later heavily involved in several beauty pageants nationwide and also won numerous major titles. DeLoach then scouted by an agent for modeling and did many ads and TV commercials.

Subsequently, the then-emerging model headed to New York with her mother seeking further modeling jobs. After spending a full summer in the big city, they relocated to Georgia.

At the age of 12, Nikki joined Clovers & Company, the Georgia 4-H Performing Arts group, and performed until 1994. She went on to become a member of the variety TV show All-New Mickey Mouse Club in 1993.

DeLoach appeared on the show with superstars like Keri Russell and Ryan Gosling. Then future pop stars include Justin Timberlake, JC Chasez, Britney Spears, and Christina Aguilera were also the member of the show.

Following the show’s cancelation in 1994, DeLoach spent the next few months at her local high school, in Georgia.

Nikki then moved to Los Angeles with her grandmother to pursue a career in acting. Her early acting works include Gunfighter’s Moon and Traveller in 1997.

The Grey’s Anatomy is a Former Member of ‘Innosense’

In 1998, Nikki joined the girl group ‘Innosense’. The group initially managed by Lynn Harless, Justin Timberlake‘s mother became quite popular across Europe. However, it separated in 2003.

On 1st Feb 2019, Nikki wished Justin on the occasion of his birthday. She mentioned him as her brother from another mother in the photo.

A big ole HAPPY BIRTHDAY to my brother from another mother (although you have to share her with me too). In lieu of a gift this year, I decided to post this really attractive #tbt of the both of us in your honor. You’re welcome. 🎉❤️😘@justintimberlake

The two seem to be pretty close to each other from an early age in the picture.

After Innosense‘s breakup, DeLoach resumed her acting career landing a variety of roles in a wide array of movies and TV shows. She appeared in a mystery thriller The Net 2.0 (2006).

Nikki also performed in several Hallmark projects including A Dream of Christmas (2016), The Perfect Catch (2017), and more.

What is Nikki DeLoach Net Worth?

As per sources, Nikki DeLoach owns a net worth of $1 million. She has racked the major portion of her wealth from her acting and many other endeavors.

After a series of unfortunate incidents with her family, DeLoach is now using her status to shine the light on several serious issues. She serves as a spokesperson for both the Alzheimer’s Association and Children’s Hospital of Los Angeles.

The actress along with her friend Jen Dede also co-founded the blog called What We Are with the aim to boost women’s empowerment.