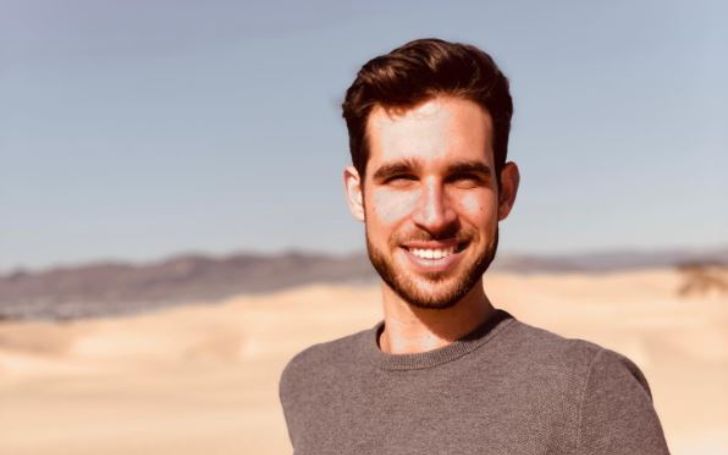 Nikko Santo Pietro is a project manager at Melissa’s Produce and a businessman best known for being the son of Vanna White. His mother is a well-known television personality. You may know her for being the hostess of Wheel of Fortune, a television game show.

Being a star kid he has always been a subject of global curiosity. However, very little is in the media when it comes to his personal life. People are pretty much curious about his love affairs, girlfriend, relationship with his parents & whatnot.

Well, in this article, we are going to answer it all. So, without any further ado let’s find out more facts about Nikko Santo Pietro, Vanna White’s son.

Who is Nikko Santo Pietro? A Little Insight on His Childhood, Age, and More

As we already discussed, he is a project manager and a businessman. Santo was born Nicholas John Santo Pietro on June 10, 1994, in the United States to Vanna White and George Santo Pietro. Talking about his age, he is 28 years old as of 2022 and his birth sign is Gemini.

Similarly, he has a younger sister Gigi Santo Pietro and an older half-sister, Andrea Santo Pietro born to his father from his previous marriage with Linda Evans. He and his sister enjoyed their childhood in Los Angeles. His maternal grandparents are Miguel Angel Rosich and Joan Marie Rosich.

Talking about his racial background Nicholas has mixed ethnicity. His mother has Spanish ancestry whereas his father has white ancestry. Likewise, he is an American as per his nationality.

In November of 2002, their parents decided to walk their separate ways and Nikko with his sister was raised by their mother.

The star kid is a well-educated individual. He completed his high school at Highland Hall Waldorf School. Pietro was fond of Agriculture from the beginning, so he went to Rogue Community College to pursue his dream to study agriculture sciences.

Likewise, he went to study at The University of Arizona. Similarly, according to his LinkedIn profile, he gained a Bachelor’s degree in Agriculture Operations and Related Sciences at Oregon State University.

Nikko Santo Pietro Career: He is a Project Manager and an Entreprenuer

After completing his education Vanna White’s son started his career working as a special projects manager for Melissa’s Produce in November 2020. The company is located in Los Angeles California and provides food and beverage services.

It is an organic produce supplier certified under CCOF (USDA) providing Latin and Asian produce, a variety of fruits, and squash. He previously did some voluntary work as a garden designer and also worked as a part-timer in Natural Health Food Store.

Apart from his career as a project manager, he is also an entrepreneur. He runs an online bread business by the name Nikko’s Bread which supplies customers with high-quality sourdough bread. He is also an avid artist and constantly posts pictures of his paintings on his social media platforms. Similarly, he is also into fitness and loves working out.

Is Nikko Santo Gay? He was Dating a Monk

“Jaycee and I have a special relationship, It’s the closest I’ve ever been with anyone. It’s just spiritual and wonderful and there is chemistry – and if there’s sex also, so be it. It doesn’t matter!”

Nicholas also shared that Jaycee has already met with his parents, who both like him. However, Vanna White seemed terrified of losing her beloved son to the Hare Krishna movement as it was previously accused of indoctrination and false captivity.

Further, with the fear of losing his son to the monk, the Wheel of Fortune star and her ex-hubby reportedly refused to pay $1 million to his son who according to Vana demanded the money to build an ashram. However, Pietro denied the allegations and said, ‘The money I asked for was for my living expenses – food, gas and for living my spiritual life with Jaycee.’

Despite that, many well-wishers and close family friends accused the monk of being money-hungry and using Nikko just to fulfill his monetary needs. The two later separated and Nikko went to Oregon State University.

Nikko Santo Pietro Has a Girlfriend? Details on his Relationship

The celebrity son is currently in a relationship with his girlfriend Codie Jascor. The two have been in a relationship for quite some time now. They first met during high school but only started seeing each other while studying in college.

Both of them seem quite happy together as Nikko frequently posts pictures of her on his social media accounts. The pair hasn’t shared any information regarding getting married as both seem to be focusing on their careers now. We just have to wait and see if they decide to take their relationship further, till then we wish them to be happy in their relationship and hope that they will be together for days to come.

Who Is Nikko’s Mother Vanna White?

Nikko Santo Pietro’s mother was born Vanna Marie Rosich on February 18, 1957, in North Myrtle Beach, South Carolina. She was a contestant in Miss Georgia USA in 1978 before making her television debut in 1980 with the game show The Price Is Right. She was one of the four contestants and during the show’s 50th anniversary in 2021, she made an appearance as a guest model.

Similarly, she has acted in many movies including Looker (1981), and Graduation Day (1981). She has also appeared in the television film Goddess of Love. Likewise, she has starred in a lot of TV series including L.A. Law, Simon, and Simon, Full House, and Super Mario Bros Super Show.

Her breakthrough came when she was selected as the substitute hostess in Wheel of Fortune and later became the show’s regular host. She has regularly hosted the TV show and recently signed a contract for the 2023-2024 season.

He is estimated to have a total fortune of around $500,000. Santo has accumulated his worth from his career as a project manager and his bread manufacturing business.

On the other hand, his mother Vanna White is estimated to have a total fortune of $85 million. She has accumulated her wealth from her career as a television personality. She is the host of the hit show Wheel of Fortune and is a real estate investor.

Nicholas is active on Instagram (@nikkoshow) and Facebook (Nikko Santo Pietro). He posts lots of photos of himself with his family and pictures of his business and his artwork.