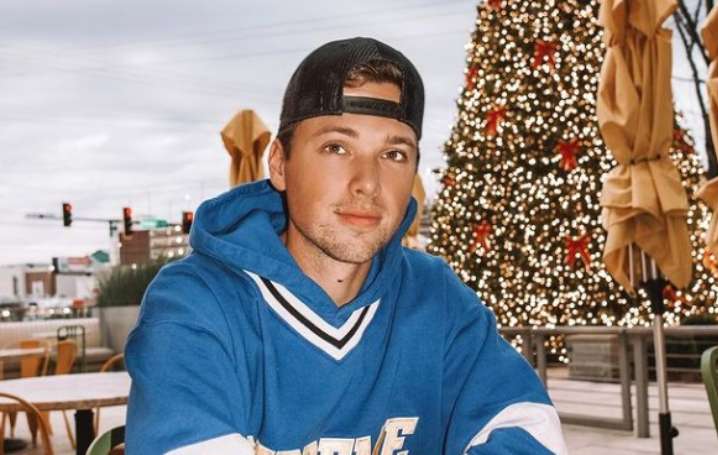 Noah Schnacky is a Minneapolis-born American singer popular for releasing his songs like Don’t Wanna Know, Hello Beautiful, and She Broke My Heart. He is also recognized in the film industry for his roles in Golden Gates, How I Met Your Mother and HitStreak.

In addition, Schnacky is also a social media star famous for his comedy, prank, and trending challenge videos. As of 2022, his verified Insta profile has over 1.3 million followers and 8 million followers on TikTok.

Being quite a popular face on social media platforms, many of his fans also want to know about his dating life. So, let’s know if Noah is dating or engaged to his girlfriend. If yes, who is his soon-to-be wife? Stay tuned to learn every detail about him.

What Age Is Noah Schnacky? His Parents and Family Details

Noah Schnacky’s full name is Noah James Schnacky. He is also known by a nickname, ‘The Schnackster’. He was born on January 27, 1997, in Minneapolis, Minnesota, the United States, under the birth sign Aquarius. Currently, his age is 25.

He spent his entire childhood in Orlando, Florida alongside his family.

People have always been curious to know if the country singer has any relation with the TikTok star Allie. Well, the answer is yes. Noah grew up with four siblings including Allie Schacky as well.

He has two more younger sisters named Noelle Schnacky and Ella Schnacky. Also, he has an older sibling, Colby Schnacky. By profession, his brother is also a TikTok star.

Where Did Noah Go To School?

Talking about his education, Schnacky previously enrolled at Sunset Park Elementary. He then attended Bridgewater Middle School. Later on, his parents enrolled him in Florida Virtual School for high school so that he can follow his passion and travel to Los Angeles for job offers.

How Did Schnacky Get Famous? Career Highlights

Schnacky is a renowned actor, singer, and songwriter by profession. He was interested to establish himself in the field since his early days. When he was 8 years old, Noah Schnacky started following in his dad’s footprint and began his journey in the entertainment industry.

During his struggling years, Noah went to tour and was cast in episodes and movies. He also did voice-over, theatre, live performance, and print all around the United States.

During his travel to Nashville for cutting his first originals at studios like Sound Stage and Place on music row, the versatile social media star started writing and recording songs. The 25-year-old Noah who studied under the vocal coach, Mark Goff released his first original single, Miami to LA in 2014.

His debut song was considered the ‘Best Song of the Summer 2014’ by J-14 Magazine. Later, his EP titled, Hello Beautiful (2018) gained momentum earning more than 15 million streams on Spotify within 6 months of its release.

Besides his singing career, Noah is also an actor who started his acting career in the 2009 television series Ace Venture: Pet Detective Jr. Later on, the man with many hats featured in projects like Golden Gates, Got Home Alive, How I Met Your Mother, Loverboy, and Turtle Tale.

Additionally, Schnacky also appeared in the short TV series, HitStreak (2013-2014). He portrayed the role of Lake McKnight in the television show In Sanity, Florida (2017). Besides, the actor likewise served as a director in the mini-series, Big Machine Records Home School Sessions.

Along with his growing acting and singing career, the HitStreak alum is also a popular social media personality who is available on various platforms. Currently, Noah Schnacky is available on Twitter with 31.8k followers and on Facebook with 423k followers.

Mostly, Noah is famous on Instagram and TikTok. On his Insta profile, he has 1.3 million followers, whereas, his TikTok account has 8 million followers. On these platforms, he often uploads his personal as well as professional photos and videos including his comedy and prank.

Is Noah Schnacky Engaged? Who Is His Girlfriend-Turned-Fiancee?

As of 2022, Noah Schnacky is engaged to his girlfriend-turned-fiancée, Kristin Marino. His fiancée is a well-known social media influencer hugely famous for her TikTok account where she often uploads comedy and occasional pranks videos.

Moving towards Schnacky’s relationship, he started dating his GF Marino in July 2021. According to the musician, Noah met his partner with one of his friends whom he thought to be her boyfriend. After knowing that they were only mates, he revealed he was very happy.

He introduced his then-girlfriend on his YouTube video titled ‘Our Love Story’ and said:

I met [Katie] a few weeks before COVID happened… she came to this church that I led worship for like 6 years… but I can remember her first time walking up.

Noah disclosed that he thought he never had a chance and would get rejected if he asked out. But he was proved wrong when he first asked her out.

They first started spotting each other in late 2020. In Sept of the year, the first time, Noah and his then-girlfriend appeared together on her Instagram.

And Schnacky made his relationship official with Marino by posting a video titled I Made Her My Girlfriend on 20th June 2021. He also said the two are together for the past four months.

In October 2021, the couple celebrated their 5th dating anniversary and the actor also popped the question to his girlfriend at the time. Noah announced the big news, posting a video on his own channel with the title, “We’re Engaged?”

“She said yes and I met her at the breakfast.. we went out on the boat for a talk and we both agreed that we weren’t the ones for each other”

Kristin Marino was born on November 5, 1997, in the United States, to parents Kenneth Marino and Katrina Marino. The 24 years old has a brother named Tyler Marino.

Talking about her professional life, she is widely famous as a social media personality and content creator. Initially serving at Disney World parks, she is now a TikTok and YouTuber star. As of now, she is popular for sharing clips related to pranks and comedy videos.

How Much Is Noah Schnacky Net Worth In 2022?

The social media star has grabbed an impressive amount of money mainly from his movies, television shows, and modeling contracts. As per reports, Noah Schnacky has an estimated net worth of $5 million in 2022.