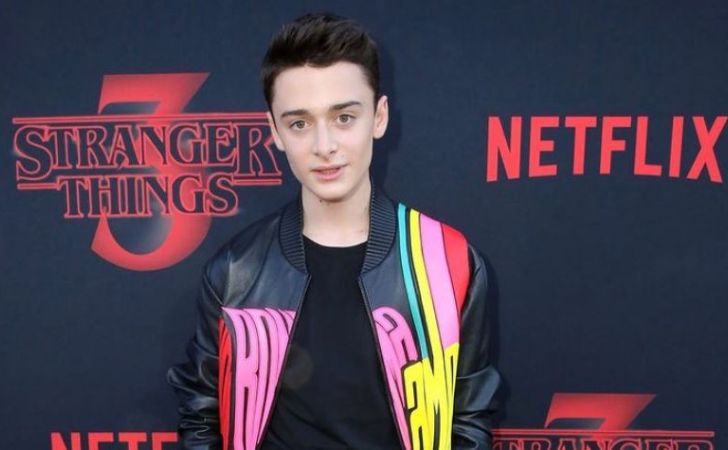 Celebrities getting caught up in rumors and speculation about their romantic relationships is not a new thing. And Noah Schnapp is also one of those celebrities who often becomes a subject for similar reasons. With every tabloid coming up with articles about “Noah Schnapp’s girlfriend,” things seem to have turned unclear and confusing.

So far, he has been linked with numerous girls including Charli D’Amelio, Millie Bobby Brown, Addison Rae, and many others. But who exactly is his girlfriend in 2022? Is he even dating at present?

Here, let’s find out in detail about his love life.

Noah Schnapp Girlfriend: Who Is He Dating?

Stranger Things Star Noah Schnapp just turned 17 on October 3, and it is an obvious age to have a girlfriend. But when it comes to Schnapp, it looks like he is not into the dating game as of 2022.

Though he is linked to numerous celebrities, he has not confirmed any of the speculations yet. Rather he claims a few of his Stranger Things co-stars as his besties.

That said, it is still very possible that Noah is in a secret relationship. For now, all we can do is wait until he comes out with a romantic partner.

Well, below in this article, we are going to answer some of the frequently asked questions about Noah, primarily surrounding his love life.

Noah and Millie are some of the most anticipated couples in the media. In fact, the two have been speculated to be a couple of numerous times in the past.

However, despite all the speculation and rumors, none of the two ever confirmed the speculation. The two are instead good friends and often make appearances in their social media posts. Moreover, they have interesting nicknames for one another as well. While Millie calls Noah Schnipper, Noah has nicknamed her Mills or Millster.

Besides, the most interesting part is that Noah ships Millie and his Stranger Things co-star Finn Wolfhard as romantic partners.

Just recently in March 2020, Noah tagged Millie and Finn together in the meme asking to tag two people who want to hook up with each other.

Millie and Finn who also play romantic couples in the series Stranger Things have not confirmed the news yet.

Another name that is tied up as Noah Schnapp’s girlfriend is Charli D’Amelio. But the truth is far from all these assumptions. They are not dating but are instead good friends.

In March of 2020, TikTok queen Charli and Noah teamed up for a YouTube video on Schnapp’s channel, and they rather appeared to be more of a friend.

In the video, the lady love of millions Charli gave a sneak peek into her dance studio and also taught Schnapp some dance skills.

As for a fact, the beautiful Charlie dated internet celebrity Chase Hudson in the past.

Like any other rumors, Noah was also shortly linked with Instagrammer Addison Rae. The speculation about their affair began after the two appeared together in a few TikTok videos.

Like any other speculation on his love life, Noah never bothered to respond. And apparently, the couple had never been in a relationship.