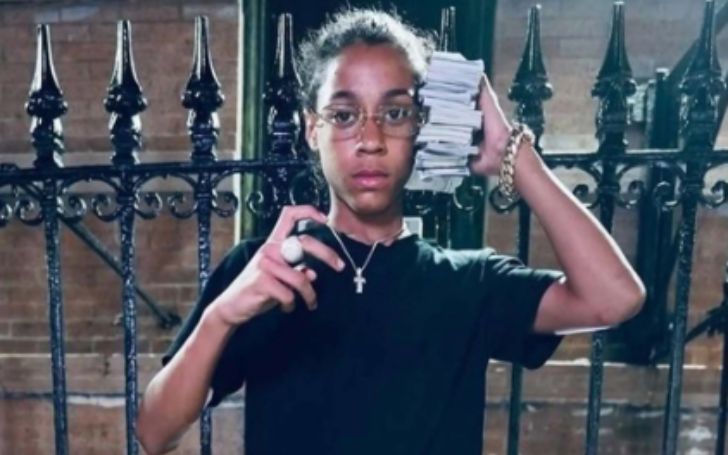 Notti Osama was a 14-year-old Yonkers-based drill hip-hopper. He is also famous as the late brother of musical artist DD Osama. This duo of brothers came into the spotlight recently in 2022 with their songs.

However, Notti recently met with a recent tragedy in July of 2022 that took his life. Yes, this young kid trying to make his name in the American rap industry is no longer in this world. So, what actually happened to him? Sources confirm that this hip-hop-loving rapper was stabbed to death by another 15-year-old. We will learn more about the details of the incident later in this article.

Therefore, here, we will look closely at the life of Notti Osama. Do you know what his actual name is? Let’s find out together!

Notti Osama Is Not The Rapper’s Actual Name; The Teen’s Family and Early Life

The late Notti Osama was born with the name Ethan Reyes. We know very little about this teen’s parents and upbringing. However, it is certain that Notti is the brother of DD Osama.

His brotheer DD Osama’s real name is David Reyes. He is a 15-year-old rapper who also specializes in drill rap. He and his brother have collaborated on many songs together. The brother-duo also shared a great bond and seemed pretty close to each other before Ethan’s death.

Besides this, there is no information on Notti Osama’s education as well. Since he was just 14 years old when he passed, we can guess he was in school or might have just dropped out to focus on rap.

Before his death, Ethan, or as people know him, Notti Osama had a quite successful career in the rap and hip-hop industry. We aren’t quite sure of when his career actually began, but since it did, Notti won the hearts of millions of young people like him. 41 K, Peter Pan, and Don’t Change are some of his songs that were released just this year, in 2022.

In addition to this, the Osama brothers had a joint music career of their own too. Their song, Dead Opps is a big hit and the cause of DD Osama’s popularity. The brothers have used uptempo beats with grim and dark tracks in the song, and clever lyrics to taunt their enemies. Dead Opps was released on 12th July 2022 and has over 1.2 million views.

Was 14-year-old Notti Dating A Girlfriend?

It is not certain whether Notti Osama was in a relationship before his death. He was just a 14-year-old kid trying to make his way to fame in the rap industry. Moreover, we believe that this hip-hopper was just focused on his career and nothing else, or maybe he wanted to keep his love life off of the radar. Regardless, we should respect his decision.

The Death Of Ethan Reyes AKA Notti Osama

14-year-old Reyes passed away on 9th July 2022 after being brutally stabbed to death in a subway station in Manhatten. At the 137th Street-City College subway station, he and his killer got into a huge fight which provoked the assailant to stab and kill Notti. After the incident occurred, the young rapper was taken to Presbyterian Hospital where he was pronounced dead.

So, who started the actual fight? Apparently, it was the stabbing victim. Sources confirm that Reyes pushed his killer, 15-year-old Kelvin Martinez, onto the tracks which angered him into fatally killing him later with a knife. The whole incident was captured by the security cameras placed around the station. After the stabbing, Osama tried to run away but collapsed on the stairway where he was found bleeding out from his stomach.

However, the young killer did not seem to face any legal charges. From the evidence gathered from the crime scene, the authorities claimed his act of killing to be out of defense. Also, Martinez is a minor so it is obvious that he won’t face any harsh punishment by law.

Reyes’s Brother’s Reaction To His Death

DD Osama was devasted by the death of his brother. Following the unfortunate event, he posted a TikTok video opening about the loss that he just faced.

Despite talking about the love he has for his brother, David mentioned in the video,

“I was still thinking ‘What if I stayed? If I just stayed with him more time, he would really be here today.’”

He really seems to miss his brother a lot. However, he is carrying Notti Osama’s legacy quite well even today. As a tribute to his partner in crime, DD released the song, E4N, expressing all the pain he felt after the passing of Notti. Similarly, his other song, Long Live Notti, is also loved by millions.

Notti’s Brother, DD, Is Working To Continue His Legacy

By now, it is obvious that DD Osama is a drill rapper like his brother and is continuing his young brother’s legacy in hip-hop and rap. However, he is still very young and it will take years before DD is as famous as the other rappers that are known worldwide.

Furthermore, with the fame he has received so far, he earns a lot, probably in thousands of dollars, and is making his brother in heaven proud.

Who Are Kane Brown’s Parents? His Family, Father, Marriage, & More