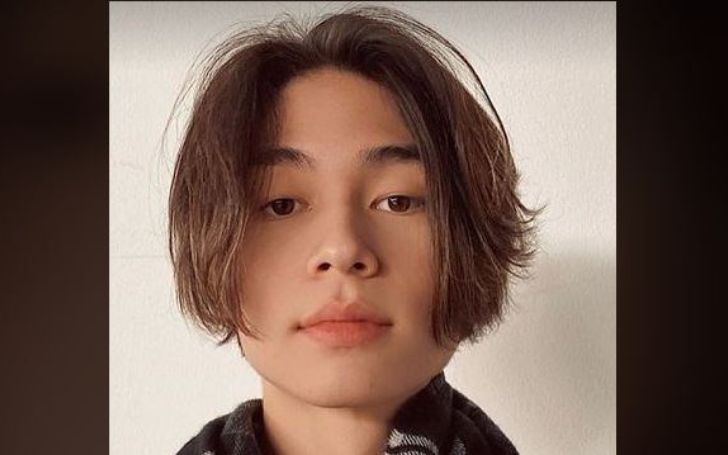 Oliver Moy is a social media star, TikToker, and Youtuber who is also one of the nine members of the North Star Boys, the first Asian American Content Group. He is in fact the leader of the group. Moy is a multifaceted creator that leveraged his passion for music and media, to co-create, North Star Boys. For this, he teamed up with his younger brother, Sebastian Moy, also a fellow YouTuber.

This collective of seven Asian American content creators first rose to prominence in mid-2020 for “go girl give us nothing” seductive TikToks. They gradually garnered a large fanbase by pushing the boundaries of fan fiction and TikTok’s community guidelines. The North Star Boys’ TikTok currently boasts more than 5 million followers, while individual members like Oliver Moy have close to 12 million.

Euphemistically, Moy and the rest of his members have become known as the “pick your Asian” group, a way for Asian men to fetishize themselves for white audiences. The North Star Boys also has a YouTube channel where the nine can be seen participating in challenges, including a recent video based on the games featured in Netflix’s hit series Squid Game.

The collective of Asian American creators’ Youtube channel has over 98 videos with combined views of close to 27 million. North Star Boys is currently represented by WME in all areas. The two parties signed the deal in Oct 2021. The group, on the other hand, is managed by Charles Morris of House 17 and Tyler Bray.

Oliver and his boys state their mission is simply “to be an inspiration to Asian Americans.” Down here read about the main character, Oliver Moy who made it possible or who came up with the idea of forming an influencer group. Get to know how he rose to internet fame, his upbringing, relationship, future plans, and all.

Is Oliver Moy Korean? What Is His Real Ethnicity?

While Oliver is yet to share details about his family, contrary to rumor, he is not Korean; the Asian-American influencer instead is part Chinese and part Colombian.

What also has been in the revelation is that Moy, who was born on March 7, 2001, and his brother, Sebastian grew up home-schooled in South Florida. The two though went to public school for about one year during their mid-teens.

How Many Siblings Does Oliver Moy Have?

In addition to Sebastian, Oliver, the 21-year-old also has an older brother named Alex. His other siblings include Mateo Moy and Nick Moy.

How Did Oliver Become Famous?

The son of Natalie, Oliver Moy always wanted to become a YouTuber growing up. Oliver has also been passionate about acting and singing since childhood. While growing up in Florida, the brother duo channeled their love for the arts into filmmaking, music, acting, and dreaming about moving to Los Angeles.

Oliver began creating content in 2016. Helping him in this journey was his brother, Sebastian. The brothers initially did it as an escape from reality.

They first used to appear on their older brother, Alex’s YouTube channel. Within three years, Oliver’s passion projects turned into a career where he participated in a successful nationwide tour among some of the top creators in social media.

Oliver and his brother Sebastian have also formed a musical group called The Moy Boys. The brother duo so far has released four singles namely, Sweetheart, Ice Cream, Nautical, and Up All Night. The Moy Boys also has a YouTube channel with over 100k subscribers.

Ironically Oliver’s mother didn’t let him and his brother, Sebastian have their social media accounts until they were mid teenagers.

Apparently, she was against her sons having social media handles. Oliver once said he and his brother had to convince their mother for a long time to go on and have their own internet profiles.

Does Oliver Moy Have A Girlfriend?

Moy currently seems to be single. In Dec 2021 when doing a Q & A with his little brother, Moy stated that he didn’t have a girlfriend but said he wanted to get married at some point in his life.

What About Oliver’s Past Relationships?

While over the years, Oliver has been seen with a handful of girls. Though only with a few has he been noticed going a little further than just friends.

There were also rumors that Moy had something going on with fellow social media star and cover song artist, Tessa McGuire.

Oliver And The North Star Boys Controversy Of Thirst Trap

In Jan 2022 The North Star Boys found themselves in political controversy after they posed in front of a wall with the slogan “Stop Asian Hate.”

The Stop Asian Hate movement had gained momentum in 2021 after a rise in racist and violent attacks against Asians during the COVID-19 pandemic. It included rallies organized across the country to protest the brutality and show solidarity, particularly in the wake of Vicha Ratanapakdee’s death as well as the Atlanta spa shooting.

Having said that followers didn’t love it when the Oliver Moy-led North Star Boys used it as a backdrop for their latest group photo.

One commenter wrote, “it’s giving Kendall Jenner Pepsi,” while another wrote. “I’d rather be called a slur.” The viral photo from Oliver and the boys spawned several TikToks making light of it.

In response to the criticism, the influencers posted two response videos, on TikTok and YouTube. Oliverwhilst explaining the photo with his fellow Boys seated around him said,

“That is not a thirst trap. And we are not activists, nor do we try to be.”

Additionally in a statement to BuzzFeed News, the North Star Boys collectively said:

We as Asian Americans stand in solidarity with our community, and only want to use our platform to promote positivity and inclusivity.

The influencer group said it was not just Asian Americans out there that they want to inspire. But they believe everyone should feel that they can talk about what they’re passionate about, and people hear their voices. They also agreed that people should be able to show and represent their culture when they get on social media or watch TV.

They also expressed their thankfulness to all of their supporters for having their back. The squad additionally said that were appreciative of their messages and love.