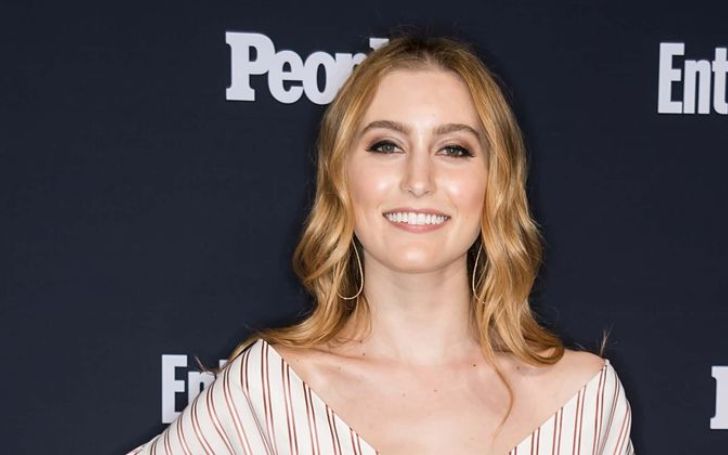 Olivia Macklin is an American actress best known for acting in The Young Pope, Radium Girls, and Pretty Smart. Likewise, she has been the talk of the town after being in a relationship with Benjamin Levy Aguila. He is also an actor and former soccer player known for acting in the TV series Filthy Rich and Chicago P.D.

Despite being an actress, she hasn’t shared much about her personal life. Well, did you know she was married previously, so, who is Oliva’s husband? Are they still together? Moreover, many of her fans and well-wishers are also eager to know about her parents, age birthday, siblings, and more.

Hence, without wasting much time let’s go through this article to uncover all of the facts about Olivia Macklin, Benjamin Levy Aguila’s girlfriend.

Who is Olivia Macklin? Her Early Life, Age, Parents, And More

American actress Macklin was born Olivia Leigh Macklin on March 16, 1994, in Glencoe Village Illinois to Nancy Bear Karger and Larry Macklin. She is 28 years old as of 2022 and her birth sign is Pisces.

Since her childhood, Olivia was pretty determined to become an actress and mostly spent her time watching movies and plays. Moreover, in an interview with The Observer, she said,

“I have wanted to be an actor since before I can remember. There wasn’t one moment where it clicked; it was just sort of woven into the fabric of my being as time went on through seeing plays and movies.”

Furthermore, talking about her ethnicity, the celebrity is said to have a White ethnical background and is American as per her nationality.

The star has two younger sisters Tatum Macklin and Emily Macklin. Like most siblings, she has a great relationship with both her sisters.

She Is A Fordham University Graduate

The Young Pope actress is a well-educated individual. She completed high school at New Trier High School in Winnetka in 2012. Likewise, after finishing her higher studies, she later enrolled at Fordham University where Macklin earned a BA degree in theatre performance in 2016.

What Is Her Height?

Olivia Macklin Is An Actress: She Has Appeared In A Lot Of Movies & TV Shows

According to the aforementioned information, Olivia always dreamt of becoming an actress from a very early age. Similarly, she got the chance to appear in a short video clip called NOTHONDURAS: Spring Break! (2014) during her time in college.

However, soon after completing her education, Macklin made her official debut in the TV series Sex & Drugs & Rock & Roll (2016). Likewise, in the same year, she played the character Madre in the TV mini-series The Young Pope. It was a breakthrough in her career as two years later she appeared in the movie Radium Girls where she portrayed Paula.

Furthermore, the actress played Nichole in the TV series LA to Vegas (2018). She got the role because of her performance in The Young Pope by Steve Levitan, one of the show’s executive producers. But many also believed that she landed the role because her mother was friends with Steve. Whatever the case, Olivia gained a lot of fame and recognition from the series.

Moreover, the talented actress also appeared in Dead to Me (2019) and has gained a lot of media traction by playing the role of Becky Monreaux in the hit TV series Filthy Rich (2020). Her latest work includes appearing as Claire in the TV series named Pretty Smart (2021).

Is Olivia Macklin Married To Harry Hill? Are They Still Together?

Well, she never got married but according to her Facebook account, Olivia is engaged to her fiance named Harry Hill. The pair reportedly exchanged rings on August 12, 2010. However, their dating history and whether they are still together is a huge mystery.

Having said that, multiple tabloids have also stated that the pair have never been engaged and that they are only friends. Well, whatever the case, we can only hope that Olivia and her so-called fiance will unravel the truth sooner rather than later.

Apart from this, Macklin was also rumored to be in a relationship with another guy named Christian Eble. Her rumored ex-boyfriend is a writer and an actor. The duo met each other while studying at Fordham University.

Well, despite all the buzz and rumors about their affair, it turned out they are just good friends and that Christian is gay and is in a relationship with Logan Thomason.

Olivia Is Currently In A Relationship With Benjamin Levy Aguilar

Olivia has been linked to many in the past. So, many of her fans wonder if the actress is currently dating someone. Yes indeed, Macklin has been in a relationship with Guatemala-born boyfriend Benjamin Levy Aguilar.

The pair first met on the sets of the hit TV series Filthy Rich in 2020. People started talking about the actor’s relationship when both of them shared a photo on their Instagram account with a heart emoji on Sept 25, 2020.

Likewise, both of them have been sharing many photos ever since and seem to be enjoying each other’s company. Moreover, they also seem to be living together and have been raising a cat, which they call their daughter. Similarly, Olivia shared a photo of her beau with the cat and captioned it,

“I will always be there to make up for our daughter’s constant, extreme lack of gratitude ♥️”

Benjamin was born in Guatemala on June 19, 1993, to Mariluz Aguilar Rivas and Jeff Levy. His mother was the 1988 Miss Guatemala and his father was a businessman. Olivia’s beau started his career as a soccer player. He was quite good at it and he played for AC Milan. However, his career was cut short due to a fracture in his femur.

After recovering, he trained in Israeli self-defense and earned a blackbelt. Similarly, at the age of 18, he moved to Hollywood where he started a new career path as an actor. His acting career began after he appeared in the TV series Glee in 2012. Likewise, his other TV credits include Out the Box (2014), Aloha Haha (2015), Filthy Rich (2020), Chicago P.D. (2019-2022), and The Woman in the House Across the Street from the Girl in the Window (2022).

The multi-talented actress Olivia is estimated to have a net worth of $500,000. She has accumulated a fortune by appearing in multiple TV series and movies, including Filthy Rich, Pretty Smart, and Radium Girls.

On the other hand, her boyfriend Benjamin Levy Aguilar is estimated to have a total net worth of $1 million. He has gathered his wealth from his career as an actor appearing in tons of movies and TV series including My Life for Yours, Rukky, Filthy Rich, and Before the Dawn.

Olivia Macklin Is On Instagram; Her Social Media Presence

Filthy Rich actress Olivia is active on Instagram under the name (@olivialeighmacklin) with 41.2k followers. Similarly, she is also active on Facebook (@ Olivia Macklin) where she mostly posts pictures of herself with her friends, family, and co-workers.

Similarly, her boyfriend Benjamin is also active on Instagram under the username (@benjaminlevyaguilar).