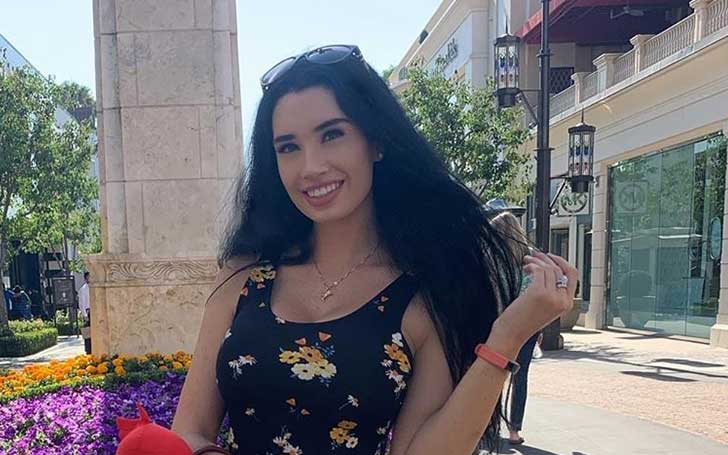 Paris Roxanne a.k.a. Paris Dylan is an American model based in Palm Desert, California. She does bikini and lingerie modeling. She started her modeling career in her teens and rose to prominence as an Instagram model where she shares her stunning and appealing photos.

Here, we’re talking some interesting facts about the California model which she has been keeping under the media radar throughout the years.

Born and raised in California

Model Paris Roxanne was born on February 21, 1994, in Corona, Riverside, California. Her father, Jack Crone is a former car racer and a mechanic. As per his Facebook profile, Jack currently lives in Corona, California, and is an owner of Jack Crone Racing which he runs since 1978. Meanwhile, her dad, Jack studied Business marketing at Orange Coast College, Costa Mesa, California.

Roxanne Has a Younger Sister

Roxanne, the 26-year-old American model has a younger sister, Courtney Crone. Courtney was born on March 7, 2001, in Corona, California. Courtney is a race car driver who competes in the Formula 4. Both Paris and their father Jack support Courtney’s racing career.

Congratulations to my sister Courtney for winning the 2018 FormulaSPEED Championship & FormulaSPEED Triple Crown Championship…not to mention setting a track record.❤️❤️❤️❤️ she never ceases to amaze me in EVERY WAY ❤️❤️ @courtneycrone I love you. #racer #racecars #girlpower #sister

She Started Her Modeling Career in Her Teenage

In an interview in 2016, model Paris Roxanne had revealed how she kicked off her career in modeling. She revealed that a photographer approached her out of the blue when she was in her mid-teens. The photographer persuaded her and soon she started working as a bikini model.

She gradually started sharing photos on Instagram where she has more than 500k followers as of 2020. As of now, she is a successful bikini as well as an Instagram model.

Paris is famously linked with singer and songwriter, Don McLean for a few years now. In spite of their immense 48 years age gap, the lovebirds have been happily together for over three years.

Previously, People reported the pair confirmed their romance in October 2018, sharing photos from their trip to France. Paris shared a photo standing of them in front of the Eiffel Tower with the caption “A dream.”

Just days before, the 26-year-old bikini model called Don “love of my life” in her social media post in which she wished the singer on his 73rd birthday.

happy birthday my baby, my beauty, love of my life, my everything. ❤️

Going through Paris’ social media, we find numerous photos of the duo, dating back to 2016. In many of the photos Parish shared on her social media, she had called Don “my baby” which of course means they were already dating by then.

One of the first pictures Paris shared after she started dating Don was in December 2016. Back then the model and her boyfriend went to Hawaii for Christmas.

Furthermore, around a month before, in November 2016, Paris shared a photo with Don, where she wished her fans a happy Thanksgiving. In the caption, Paris wrote: “I’m thankful for him. Happy Thanksgiving from Don & I” while she wrote “love” in the hashtag.

Paris met the American Pei singer back in February 2014. In February 2015, she took to her Instagram sharing a photo with Don writing “A whole year ago I met the love of my everything 💘👌,” in the caption.

Model Paris Roxanne has always been outspoken about her love for music. Specifically, she is fond of the ’60s and ’70s’ songs. Besides, she said in an interview that she loves listening to country music.

She has also met a lot of singers and musicians from that era and shared photos with them on social media. Besides, Paris also loves new music and artists. She has also expressed her love for The Zombies, Roger Daltrey, Van Morrison, and Ed Sheeran among others.

Paris Roxanne Has a Dog

The 26-year-old model has described herself as a dog lover. She has also written she loves her dog in her Instagram bio. Roxanne has a pet chihuahua dog named “Tiki.” As a matter of fact, Paris celebrated Tiki’s 15th birthday on 13th November 2019.

Paris and her sister Courtney used to play with the dog during their childhood days. She has also posted one of their throwback photos from their childhood on Tiki’s Instagram account.

Roxanne’s relationship with Basketball Star, Chris Anderson: She became a victim of catfishing

In 2011, Paris was an aspiring model when she became a victim of catfishing. Even though she herself was a rising star, she used to flirt with famous personalities on social media. At one point, she started flirting with famous athletes in the United States. And one of those athletes happened to be NBA star, Chris Anderson.

Paris frequently messaged Anderson on Facebook, however, the basketball star never replied. However, after some time, she eventually received a message from Anderson. The pair started talking regularly. They used to exchange e-mail and texts as well. After a while, Paris started sexting Anderson.

One day, Paris received a message from a man named Tom Taylor who introduced himself as a best friend of Anderson. Roxanne never doubted Taylor and Anderson’s friendship and started talking frankly with him. Taylor gradually encouraged Paris to take her romance with Anderson to the next level.

Meanwhile, Taylor also said that Anderson really wanted to meet her and he would arrange their meeting if she was ready. Ultimately they agreed to meet and Anderson ended up buying Paris a plane ticket. Afterward, Paris went to stay with Anderson for a weekend.

It didn’t stop here. When Anderson was playing Xbox, he mentioned Paris’ sister was also online. But, she said her sister didn’t even own an Xbox. The confusion continued as Roxanne mentioned Anderson’s best friend Taylor while he was completely unaware of who Taylor was.

Despite these inconsistencies, Paris and Anderson went on to talk online after she got back to her home.

One weekend, she was talking with Taylor and she said she was going to meet another famous basketball star, Blake Griffin. After hearing this, Taylor got aggressive and even threatened to “have her raped, and murdered, and thrown on the side of the street.”

Taylor then went on to say that Andreson had shared her naked photos with him and Taylor was going to post them online with her identity and address. Taylor then posted all the photos online and sent her a link to that.

Frightened, Paris finally collected her guts to share all these things with her mother, and on her suggestion, the police were called.

The Catfisher was Jailed Eventually

After an extended investigation, police discovered that both Anderson and Paris were being catfished online. Police found out that everything was linked back to an IP address located in Canada. And it turned out Paris and Anderson conversed through a third party the entire time.

According to ABC, Chartier was the caretaker of her mother who was bedridden. Moreover, Chartier said she didn’t have any friends and had left school at age 12 when she was in sixth grade after she was heavily bullied.

Chartier later pleaded guilty to several counts of fraud including extortion, impersonation, and making threats. She was then sentenced to 18 months in jail. She was released after 12 months in October 2016. As of now, Chartier is married to a man named Rob Marku whom she met online. Quite the irony isn’t it?!

Model Paris Roxanne has made her appearance on MTV’s show, Catfish. Catfish is an American reality-based documentary series that shows the truths and lies of online dating. The MTV show is based on the 2010 feature film, Catfish.

Paris appeared in an episode of the 2017 season of the show. The episode showed how Paris, a 17-year-old rising model became a victim of catfishing.