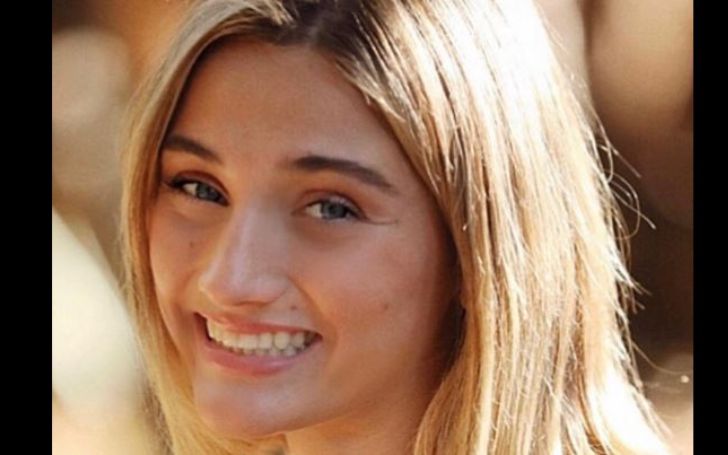 Talula Fyfe Dempsey is a psychology student at George Washington University who is better known as the daughter of the Grey’s Anatomy actor, Patrick Dempsey, and his wife, Jillian Fink.

There’s usually a lot going around in the Dempsey family when Patrick isn’t running in films and TVs. And more often than not, that family busyness includes the Flypaper actor’s children including his growing daughter who has now just stepped into her 20s.

Get clued about the youngster in the write-up below; read all about what she’s been up to until today, some stories about her celebrity parents, her siblings, and the rest.

The now 20 years old, Talula was born on February 20, 2002, to father Patrick Dempsey, & mother Jillian Fink. Her paternal grandmother Amanda was a school secretary and her grandfather William, was an insurance salesman.

Aforesaid, Talula is currently a university student at George Washington University where she is allegedly majoring in clinical psychology. Patrick’s daughter apparently started college in 2020. She, now, presumably is in her sophomore or junior year.

Dempsey once revealed it was hard for him to be away from Talula while she was studying in college. The Maine-born actor though admitted it was important for her to be out on her own.

Patrick in Oct 2020 when talking with Jimmy Kimmel for his show revealed the isolation and the lack of any socialization made it super hard on his daughter, Talula.

He told Kimmel that because of the pandemic 2020, Talula missed out on the opportunity of having the usual high school experiences. She also had to skip senior prom, graduation, and all the other high school things.

The actor/car racer, in any case, said he and his family threw Talula a mock prom at their own house to try and make up for the loss of her senior year milestones. The George Washington student put on her dress and hopped onto Zoom with all of her friends to celebrate.

Whilst revealing that Patrick also admitted to feeling sad as a parent whose child didn’t get to have that moment. He stated his family didn’t see that coming. The ex-participants of 24 Hours of La Mans added the pandemic also had been difficult for Talula’s brothers.

Talula also spent a summer studying in Barcelona. This was apparently possible because her actor father believes traveling is the best education and that parents should expose more to their children so that they can learn about different cultures and experiences.

Her Siblings: She Has Two Younger Brothers

As mentioned, Talula is the oldest child of the Enchanted actor, Patrick Dempsey, and his wife, Jillian Fink.

She, however, also has two younger brothers, Sullivan Patrick Dempsey and Darby Galen Dempsey. Talula’s brothers, Darby and Sullivan have also appeared on the cover of the People Magazine. The two at the time had just been born.

While Talula does have two younger brothers, they may be her only junior siblings for life. Apparently, her father, Patrick, and mother, Jillian had ruled out the option of having more kids a long time ago.

In fact, the Outbreak actor and his wife’s decision to have no more children took place amidst the birth of Talula’s two brothers. Dempsey has admitted he and his wife were done when asked if he was adding any more offspring.

The university scholar, Talula’s mom, and Patrick’s current wife, Jillian is a celebrity hairstylist in addition to a makeup artist.

The mother of three having styled for names including Julia Roberts, Bradley Cooper, and even her husband, is one of the most notable makeup artists in Hollywood.

Patrick’s spouse and Talula’s mother, Jillian is also an entrepreneur who has her own luxury line of lip and cheek tints. She further also owns businesses including lid tints, kohl eyeliner, a gold sculpting bar, hair pomade, and more.

Talula’s Parents, Patrick And Jillian Have Been Married Since The Late ’90s

Talula’s folks, Patrick and the beautician, Jillian married in late July 1999 at a farmhouse in Maine. The venue belonged to the Scream 3 actor’s family. Patrick and Fink met each other when the former came for a haircut at Jill’s salon.

Jill says she found it shocking when she saw Talula’s father for the first time at her workplace but she was also happy how cute the Loverboy actor was.

Patrick would visit Fink’s salon for the next three years, however, during those years, Jillian was somebody else’s partner. Fink eventually became single and Talula’s father finally asked her out. After some months, they moved in together.

All seemed to be going fine for Talula’s parents, Fink and Patrick. Jillian, however, would file for divorce from the Lewiston native in Jan 2015. The mother of three initially cited irreconcilable differences as the primary cause.

Patrick and his wife, Jillian, though, would decide to give their marriage another chance within a year, and shortly after that, at the start of 2016, the media started spotting them hanging out with each other.

Then after some months, Talula’s father, Dempsey during his interview with Evening Standard confirmed he and Jillian were back together. The parents of three reportedly decided to reconsider their union with the help of counseling. Patrick said he and his wife thought of getting back together because they wanted to be role models for their kids.

Her Father, Patrick Dempsey Was Married Before

Talula’s father, Patrick before Jillian was married to Rocky Parker, a much older woman who was also his friend’s mother.

The ex-theater actor and Parker were together for seven years with the ex-couple divorcing in 1994. Apparently, the Grey’s Anatomy actor’s ex-wife also accused him of domestic abuse but later withdrew the allegations in 2006.

Patrick’s ex-partner, Rocky died in 2014 from throat and lung cancer. The entertainer/philanthropist then was also going through the divorce with his first wife, Rocky Parker.

Although Talula is a Gen-Z and a celebrity kid of a famous one, the college student is, to all appearances private, on modern online trends along the lines of Instagram, Twitter, and Facebook.

While Patrick’s daughter, Talula exists on Instagram albeit not for everyone, she is yet to have aliases on Tiktok or even Twitter. Fyfe, nonetheless, occasionally makes appearances on her father, Patrick’s social media handles. The Disenchanted actor hardly misses wishing his only daughter her birthdays or posting her TBTs pictures.