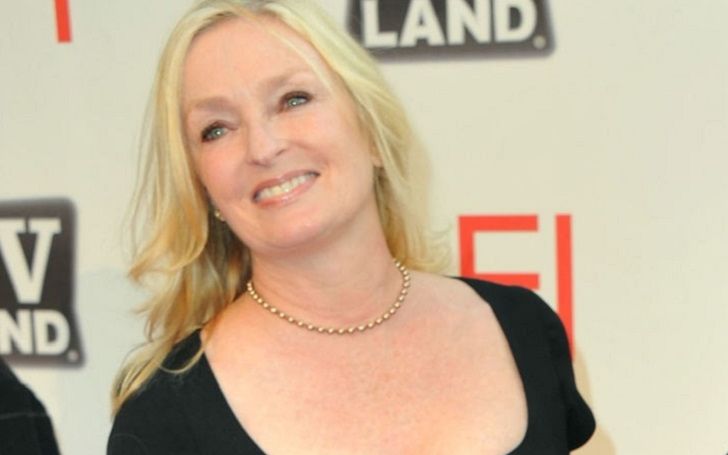 Paula Harwood has been into the media as the wife of one of the greatest Hollywood actors, Peter Gallagher. Her husband Peter professionally embarked on the show business with a role in the 1980 movie The Idolmaker and has since given a number of successful movies and TV shows to the entertainment industry.

Like his professional career, Peter’s marriage to Paula has also been going pretty well. The duo who is married for nearly four decades is also the proud parents of two children. Their daughter Kathryn has also followed her father’s career path, making quite a name in both the acting and music world.

Prior to Paula’s successful love story with Peter, we will talk about her family background and many other details.

Paula Harwood Share The Same Age With Her Husband

Paula and her hubby Peter are of the same age, 66. She is just 18-days older than her spouse. She was born on 1st August 1955 while her hubby Peter was born 18-day after on 19th August of the year.

Besides, born and raised in the United States, Harwood is Caucasian as per her ethnicity and holds an American nationality.

Paula K Harwood is the daughter of Paulette Harwood (mother) and Paul Harwood (father). Her mother was an accomplished professional dancer who unfortunately passed away on 23rd August 2019. She used to perform at Radio City Music Hall, Billy Roses Diamond Horseshoe, and more.

Furthermore, Paulette had spent the majority of her career working as a director of Paulette’s Ballet Studio. Back in October 2014, celebrating her mother’s birthday, Paula shared an adorable photo of her mother and siblings on Twitter.

Besides, Harwood grew up along with her two sisters named Pauline Harwood Wright and Paulette Harwood Rigo.

What does Paula Harwood do?

Paula has never come up with her professional details. As far as some online tabloids suggest, Peter’s life partner is a housewife.

Besides, talking about her hubby, Peter, the Tufts University graduate landed his first professional role in the 1980 feature film The Idolmaker, directed by Taylor Hackford. He later got the nomination for the Tony Award for his role in Long Day’s Journey Into Night in 1987.

Gallagher came in the light following his breakout performance in the TV drama series The O.C. His other acting credits include Grace & Franki, Covert Affairs, A Bad Moms Christmas, and more.

Harwood is the Long-Time Wife of Peter Harwood: Their Blissful Married Life

One of the long-lasting couples, Paula Harwood and her husband Peter has been leading a delightful married life since 1983. The duo tied the knot back on 7th May of the year, in a private wedding ceremony held in New York City. They are together ever since and are growing stronger as a couple every day.

Unlike many Hollywood lovebirds, Paula and her life-partner Peter are open about their love life. The duo made their first joint appearance while attending the 38th Tony Awards at Sardi’s in New York City, New York, in May 1984. Harwood has since appeared several times with her husband on various occasions.

When did they meet?

Looking back at the love story of the pair, Paula met her future spouse at Tufts University, Boston. But the duo wouldn’t soon start dating for a long time, instead, it took seven years for Peter to ask his future spouse for a date. He wrote on his anniversary post, which the actor shared on Instagram in May 2019,

“We met first week of Freshman year in college – at Tufts University in Boston- and it only took me about 7 years to get the nerve to ask her out on a real date.”

Paula is the Mother of Two Grown Children

Peter Gallagher’s wife Paula gave birth to their first child, a son, James Gallagher in 1990, in New York. He is a budding director with a few directorial projects under his belt. He has worked for Love (2019) and Election Day: Lens Across America (2017). As for his education, James first enrolled at Harvard-Westlake School and then graduated from Northwestern University, in Evanston, Illinois.

Their Daughter Kathryn is a Theatre Star

Like her father, Kathryn has also tried her hands on the entertainment world. She began studying theatre at the Adderley School after her move to Los Angeles at 11. She then graduated from the University of Southern California’s Thornton School of Music.

Soon after her graduation, Kathryn made her debut in show business and has now worked for several renowned Broadway productions, Especially, her role on the musical Jagged Little Pill brought her huge fame, winning her a  Grammy Award for Best Musical Theater Album. She also got the nomination for the Tony Award for Best Featured Actress in a Musical.

In addition to her theatre career, Gallagher, 28, is a singer and has released many singles to date.

Where is Paula Harwood Now? Take a Look at Her Net Worth

The celebrity spouse currently resides in her Los Angeles home along with her family. Her husband reportedly bought the house back in March 2007 for $3 million. The 5,225 sq ft. mansion boasts six bedrooms and four bathrooms.

Talking about her net worth, Paula’s estimated wealth is, however, still under review. In the meantime, her actor spouse Peter has a net worth of $4 million as of 2022.