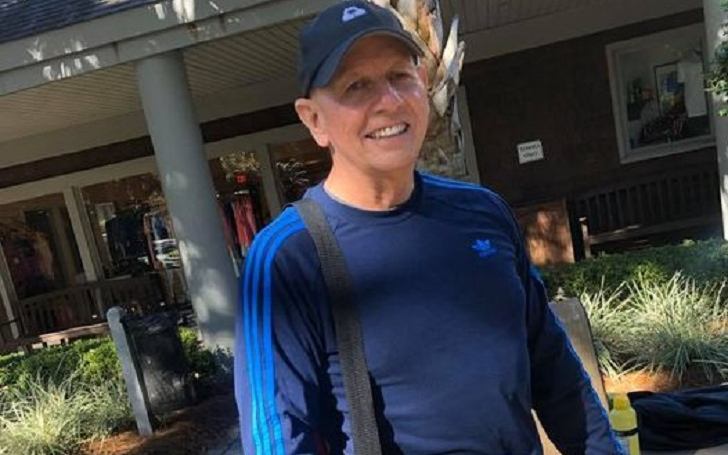 Peter McMahon is a successful British businessman but known for his longtime marriage with an American political commentator Dana Perino who currently serves as a co-host of Fox News’ talk show The Five. Along with their professional successes, the two have also maintained their love life pretty well.

McMahon and Perino whose love story began in the plane are happily married for several years now. But, does the beautiful couple share any children between them or not?

Well, allow us to trace out more about Peter’s life including his early life, parents, and a lot more!

Peter McMahon Age and Childhood: Grew Up With His Dog

Peter K. McMahon was born on June 6, 1954, in Blackpool, Lancashire, the United Kingdom. He is aged 67 in 2021. He spent most of his early years playing with his puppies at home.

Peter is an avid dog lover who had a pooch named Jasper. He brought the dog home to New York City from Maryland with his wife Dana in June 2012. Unfortunately, their pet dog died in September of 2021 due to Cancer.

You will definitely know about Peter’s unconditional love for the dog when you once visit his Facebook account which is filled with photos of his late dog, Jasper.

McMahon is the son of an air traffic controller father who worked in the Royal Air Force. He moved around a lot of places as a child due to his father’s job. Sadly, his mother died from a massive heart attack when Peter was only eighteen years.

He later spent a couple of years working on a firm.

Education and Other Activities

He was well-read who graduated from a Scottish boarding school. During his younger days, Peter used to ride motorcycles and do scuba diving. He was likewise a fan of the football team Norwich.

Upon finishing up with his education, the handsome British bloke started working in few smaller companies before venturing out into the world of business.

What does Peter McMahon do for a living?

He is a businessman who spent the majority of his career working with Johnson & Johnson, a multinational corporation which is headquartered in New Brunswick, NJ. It also helped him to have a successful start-up business of his own later in life.

According to Dana’s book called ‘Let Me Tell You about Jasper,’ Peter started his business when the couple moved to San Diego. He initiated the business from a computer in 1999. He also owned an office in Blackburn.

Besides, Dana Perino’s husband spent some time in Germany and Saudi Arabia for his work in the medical device industry. In the meantime, he also lived for a while near championship golf courses in Scotland while working but didn’t play the game.

He has racked a considerable amount of wealth from his business career and many other endeavors. His estimated fortune is $10 million.

On the other hand, Peter’s wife Dana’s net worth stands at $6 million. Her main source of income is her TV career. The couple currently resides in their beach home in Bay Head at the Jersey Shore.

Their Love Story: How it All Began for Peter McMahon and Dana Perino?

Peter met his future wife on an airplane in August 1997. The couple was assigned seats next to each other on the American Airlines flight from Denver to Chicago. They were also the last two to board a flight. MacMahon, who is from the United Kingdom, had a business in Denver while Dana grew up in the city.

Even before sharing seats together, Peter wanted Perino to sit beside him, and luckily everything went according to his plan. Whilst on the plane, he became busy reading the book “The Tailor of Panama” until Dana herself started the conversation. She commented on the book, saying that the same publication was read by one of her friends.

They chatted until the flight landed and they eventually exchanged their business cards. Peter was forty-three years old while Dana was just 25 at the time of their first meeting.

After a few weeks, McMahon went back to his home country England and Dana began working as a press secretary on Capitol Hill in Washington, D.C.

Although they lived on different continents and neither of them planned on falling in love on that flight, it eventually happened. Perino called it a “love at first flight.”

The political commentator further said, “Our romance was quick and intense. We were lovesick. For ten days after we met, I couldn’t eat or sleep or concentrate at work. I couldn’t even read the novels I checked out from the Library of Congress.”

The same case was for Peter who flew to Washington on a business trip six-week after their meeting. The businessman met Perino in Georgetown and the two soon started their love affair.

Moving towards their engagement, McMahon proposed to his girlfriend Dana when the two were on a date outside the Washington Cathedral.

However, Perino didn’t say ‘Yes’ instantly. She later wrote a letter with her positive response on the occasion of their 1st meeting anniversary. The duo soon made a plan for their wedding and they flew to England for their big day.

Where did Peter and his wife Dana’s wedding ceremony take place?

The two exchanged their vows in 1998, a year after their first meeting. The two walked down the aisle in Blackpool, north of England. The wedding attendants were only their close friends and family. They jetted off to Santorini, an island in the Aegean Sea, nearby Greek for their honeymoon celebration.

The two spent the first year of their marriage living in a northern village called Lytham, St. Annes, near Peter’s parents. They later went back to the United States and settled there forever.

It’s been a couple of decades since they are in a delightful marital relationship but they still seem much stronger than ever. She revealed the key to their long-lasting marriage in her article, published on the FOX News website,

“The key to all this? Faith. Gratitude. Grace. Commitment. Love. Surrender.”

Besides, Peter is also a supportive husband who played a major role in helping his wife Dana reach where she is today.

On the other hand, despite their longtime marriage, the couple is yet to share a child.

Peter McMahon Has Two Children From His First Marriage

The businessman was married twice in the past. Nevertheless, both of Peter’s marriages ended up with divorce. He has two grown children, a daughter, Kelly, and a son, Barry McMahon from his first marriage.

Furthermore, Peter is also the grandfather of twins Sebastian and Rachel from his daughter’s marriage to Warren.

Peter is active on Facebook and has shared a series of photos of his late puppy Jasper. His wife Dana also has an account on several social media handles like Facebook and Twitter. She often shares her hubby’s picture on her social media, celebrating his birthday and their anniversary as well.