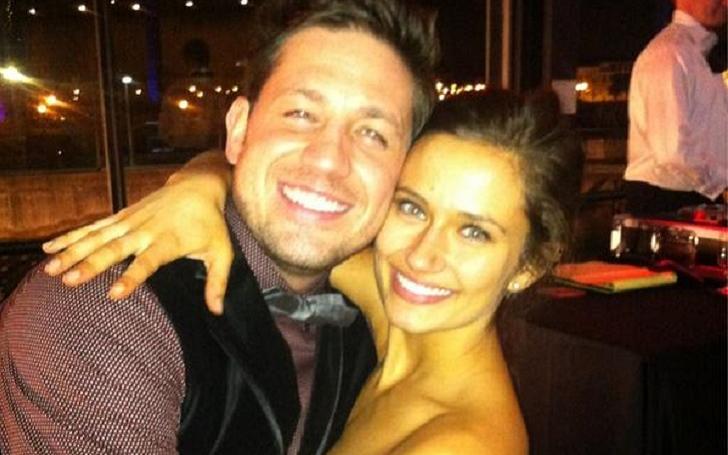 Peter Nottoli is a former husband of Crystal Reed, an actress who gained popularity for her breakout role in the series Teen Wolf. Talking about their marital relationship, the two were married for years before they separated on mutual understanding.

In addition to that, Peter is also doing great professionally. He has worked as a manager for several well-established companies including the current one Heartland RV.

Furthermore, the detail of his family background, education, and many other uncovered facts are mentioned below. Let’s take a closer look!

Who is Peter Nottoli? Is Currently a Product Manager at Heartland RV

Peter currently serves as a product manager at Heartland RV, a manufacturer of recreational vehicles. He joined the company in May 2019 and has since worked full time with it.

Talking about his past works, Nottoli became part of numerous organizations. He initially worked as an assistant manager at Enterprise Rent-A-Car in Jan 2004. Peter used to manage and train new staffs to maximize the operating profit at the company.

He left it after two years of experience and then joined Convurge Consulting, LLC in Jan 2004. Nottoli spent over a year with the company, selling business conventions to senior-level executives as well as maintaining corporate clients.

He then went on to work for Eat Well Drink Better, Inc. as a general manager in March 2005. The company, based in Chicago has a number of restaurants and bars throughout the city. He also quit his job there in August 2007.

Furthermore, in August of the same year, Nottoli appointed as a senior outside sales rep at Morgan Healthcare Services, a company that provides medical linen services to the healthcare enterprise.

Further developing his talents and experience in various sectors, Peter became the Midwest Account Manager at Mindary Medical in October 2011. He worked with it until April 2013. Additionally, Crystal Reed’s ex-husband spent more than one year working as a regional sales manager at Dutchmen Manufacturing.

Peter obtained further knowledge in the sales department after his previous prime role as a regional sales manager at Cruiser RV Manufacturing, in Midwest. Peter worked there for over four years (Jun 2014 – Sep 2018). He used to manage the selling transitions in 16 states in the Midwest/Central part of the United States and Canada.

How old is Peter Nottoli? His date of birth and parents

He was born Peter John Nottoli in March 1979, in Constantine, Michigan. He is aged 41 as of 2021. Peter is the son of Michael and Donna Nottoli, a CHAA at Sturgis Hospital Pre Access/Central Scheduling.

His parents are married for several decades now. Donna often shares some adorable pictures of themselves on her social media handles.

In addition, Peter has an American nationality and belongs to the Caucasian ethnicity.

Does Peter have any siblings?

One of his brothers Paul studied Chiropractic at Palmer College of Chiropractic. He is now the doctor of chiropractic and owner at Vitality Soft Tissue & Spine. On the other hand, Carl is the owner and clinic director at Functional Pain Relief.

Nottoli attended Constantine High School. He later went on to study management information systems at Central Michigan University and earned a Bachelor of Science in Business Administration in 2001.

Peter has an estimated fortune of $500,000 in 2021. His multiple roles with various organizations play a major role to collect such good wealth. With years of experience, the product manager at Heartland RV is also paid a considerable salary from the company.

The couple tied the knot in 2008. They wed in a private ceremony that was attended by their family members and close mates. Tabloids say the former duo was in a relationship for some time before they walked down the aisle. They led a happy marital life for a couple of years.

The duo was quite secretive about their marriage which, however, lasted for around three years. Let’s know how their relationship ended in divorce?

The two parted ways in 2011. Peter’s wife Crystal filed for divorce against her husband in Los Angeles County Superior Courts, Stanley Mosk Courthouse located in Los Angeles in September of the year.

Nonetheless, the reason behind the couple’s separation never came out. Sources reported their split was amicable. And the divorce process of the couple came to an end in 2012. Besides, the two didn’t share any children.

Is Peter dating anyone after his divorce?

No, Nottoli isn’t dating anyone officially. He has kept most of his love life out of the public eye after his separation from Reed.

But, talking about his former wife Crystal’s private life, the entertainer moved on with her Teen Wolf co-star Daniel Sharman after their divorce. They started dating in February 2012 and dated for over a year until their break up in June 2013.

The actress later linked to television presenter Darren McMullen. When the two were still dating, there were reports that Reed romantically linked to an actor Joshua Jackson in mid-2016. But, they never confirmed the rumors.

The ex-celebrity spouse isn’t much active on social media handles. He has an account on Twitter with a few followers but hasn’t posted anything since 2014.