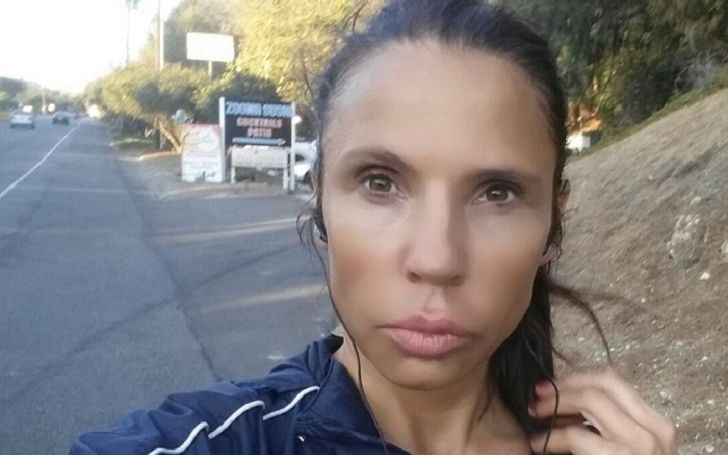 Pietra Dawn Cherniak is a former Playboy model who posed nude for the magazine in January of 1998. But, Pietra aka (Pietra Dawn Thornton) attracted huge media attention after her tumultuous marriage with Billy Bob Thornton, an Academy-Award-winning actor.

Although things initially seemed to be okay between the couple, their marriage soon hit the rough patch. After their separation, Pietra, the mother of two children even accused her husband of punching, pushing, and hitting in her divorce petition.

Besides, Billy Bob has since been married twice but what about her love life? Is Pietra also moved on with someone else? Here is everything about her post-divorce life including her reality pilot called Celebrity Ex and many more facts!

Cherniak who stands at 5 ft 5 inch (1.65 m) height was born in Pacific Palisades, a neighborhood in Los Angeles, California. Unfortunately, most of her early information remains behind closed doors. Sources believe that Billy Bob Thornton’s fourth wife did her schooling from her hometown’s school in Pacific Palisades.

Besides, Pietra’s ethnicity is Caucasian and belongs to an American nationality.

What is Her Age?

For her profession, Pietra Dawn Cherniak previously worked as a model. In Jan 1998, Pietra posed naked for Playboy Magazine to raise awareness among women against domestic violence. She told USA Today,

“The layout was a sacrifice of myself … I wanted to reach people to bring awareness of domestic violence.”

When did Pietra Dawn Cherniak Meet Her Future Husband Thornton? He was a newly divorcee at the time

Pietra first came across her future husband Billy Bob outside an L.A. Italian restaurant in 1992. The same year, the Award-winning actor divorced Cynda Williams, his costar in the movie One False Move. The two married in 1990 but their marriage lasted less than a couple of years, ending in 1992.

Soon after Pietra found his soulmate in Pietra, the two began dating and were in a relationship for around a year before their nuptials.

Pietra and Billy Bob Thornton Wedding: Details on Their Children

The former flames tied the knot on 18th Feb 1993, in a private wedding ceremony. Only their family members and close friends witnessed their ceremony.

Soon after their marriage, Pietra and Billy also started a family together, welcoming a son, William Langston Thornton, on June 27, 1993.

The two became parents for the second time after their child, a son Harry James Thornton was born on June 19, 1994.

Their Younger Son is in Show Business

Born and raised in Santa Monica, California, Harry is also involved in the entertainment industry. He mostly works behind the camera. He began his career, portraying Mike in the TV series Archer in 2014. Harry later started working off the set.

In 2018, the popular star kid served as a set dresser for the TV series The Good Place and a few other short videos like The Orville. In 2019, Harry served as an assistant property master in For The People. His other TV credits are Goliath, Hollywood, and more.

Although Cherniak and Thornton seemed to be happy initially, things didn’t go well further. Pietra filed for divorce from the actor and director on 11th April 1997. The model cited irreconcilable differences as the reason behind their separation.

A couple of days after Pietra petitioned for divorce, the former Playboy model also requested a judge for a restraining order against her ex-husband Thornton in Los Angeles Superior Court. She wrote in her court documents,

“Over the past year, at least once or twice per month, [Thornton] has hit me, pushed me, punched me, bit me or otherwise physically attacked me, sometimes in front of the children [William, 3, and Harry James, 2]”

Pietra detailed the reported incidents, further explaining that her then-spouse, “lifted me off the ground by my neck and said, ‘I’m going to kill you, and then I’m going to go to prison and the children will be orphans.”

But, Thornton vehemently denied all the accusations,

“I’m sorry that Pietra’s advisers have convinced her to take this malicious and untruthful course of action by making these false accusations of physical and mental abuse.”

“Our marriage was not perfect, but I never exhibited the behavior she’s accusing me of. Our concerns right now should be about our sons, who will suffer the most as a result of her advisers’ conduct.”

Later on, the court granted the temporary restraining order against Billy Bob. Besides, Pietra also asked for custody of their children.

Meanwhile, Cherniak said that her main motive to separate with her actor hubby is to take their kids away from becoming “wife abusers or violent people.”

Despite all that, their ending was amicable. The exes now share a healthy relationship with each other and are also quite supportive of their kids.

Back in November 2017, the doting dad Billy Bob was seen with his lookalike son Harry at Sunset Towers in Los Angeles.

Who is Pietra Dawn Cherniak Dating After Her Divorce From Thornton?

For the past several years, Pietra has remained quite secretive when it comes to her love life. But back in Sept 2014, the ex-celebrity spouse posted a photo with her unnamed boyfriend on her Facebook. She captioned the image,

As per the caption, they were roaming around the market in Malibu. However, Pietra has since never given a single hint whether her relationship with her unknown beau is still going on or it’s over.

Thus, lack of accurate details, we can’t confirm Pietra’s love life as of 2021.

On the other hand, after their divorce, her ex-hubby Thornton married twice. He first married Angelina Jolie from 2000 to 2002. He for the sixth time went on to marry Connie Angland in 2014. The two are leading a happy married life ever since.

What is Pietra Dawn Cherniak Doing Now? Her Life Post-Divorce

After things settled out with Thornton, Pietra remained out of the spotlight for years. She used to live in her seaside Malibu estate with her sons who were homeschooled at the time. Meanwhile, Cherniak got back with her old passion for writing and creativity.

After years of dedication, her labor eventually paid off. She created her own reality pilot, Celebrity Ex. It was all about the sentiment when your relationship broke down with your well-known man or woman.

What is Pietra Dawn Cherniak Net Worth?

Her estimated net worth is $500,000. She mostly makes money from her modeling career and a few other works. In the meantime, her ex-hubby Billy Bob’s fortune is $45 million. His wealth mainly comes from his acting and music career.