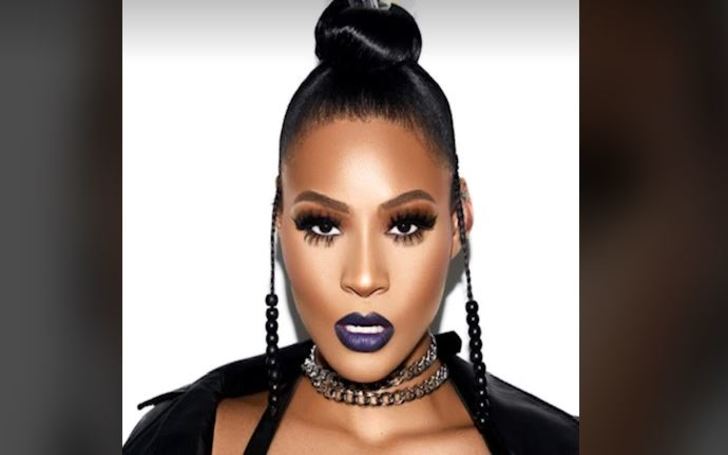 Pretty Vee is a comedian, social media influencer, reality star, and actress who is known for her hilarious skits and funny dances. Thanks to her hilarious-themed social media content, she has gained over 5 million Insta followers.

She rose through the ranks because of her knack for telling jokes and the comedic timing she displayed over the networking platforms. Additionally, she is also a rapper, beauty, and fashion guru.

Know more about Pretty Vee in the writings below; her origin, how she transitioned into a businesswoman, her personal life, and more.

Pretty Vee Is A Florida Native

Pretty Vee, originally, Vena Excell was born on 12th October 1991 in Miami, Florida. She is a child of Jamaican parents.

She once said all the characters that she does come from her upbringing or her mother. Pretty Vee who is a Libra mostly grew up in South Carolina.

Later, she and her family relocated to North Carolina, where Vee pursued her college studies at Saint Augustine’s University, in Raleigh, North Carolina.

She has two siblings and presumably, all of them were raised by a single mother. Vee, in an interview, revealed while growing up her family didn’t have much, they all loved each other very much.

Her mother, who is now a pastor, educator, counselor, and motivational speaker, used to move to different places because of her job. While Vena loves posting photos of her family on social media, she hasn’t yet clearly disclosed her parental details.

Pretty Vee Was On Nick Canon’s Wild ‘N Out

During her university studies, Vee began her radio career by hosting her own show, Lounge 22. She at one time also used to work for the Marriott Hotel but eventually lost the job for some undisclosed reason. sacked.

Vee began her career in media as an intern at Atlanta’s V-103 before landing a gig as an on-air personality at 107.9 The Link in Charlotte.

She once also participated in the game show, Hip Hop Squares with the singer/actress B Simone. Excell eventually got her recognition as Pretty Vee after becoming a leading figure on Nick Cannon’s Wild ‘N Out.

She Is Also A Successful Businesswoman

In addition to working on camera, Vee has also delved into the business, launching Pretty Vee Electronics exclusively through the Citi Trends retail clothing chain.

She is an entrepreneur and has her own beauty and electronics brand which she launched with Citi Trends.

Talking about her business ventures with Hype Hair in June 2020, Vee said,

“The journey has been remarkable; sleepless nights and overthinking, and at times questioning my creativity, and also if what I’m doing will be fruitful and come true.”

The Miami-born social media star added she is more than grateful and appreciative for the opportunity. She also believes all of those sleepless nights she had spent certainly paid off for her.

Her Pretty Vee electronics and Beauty collection is in over 570 stores and in 33 States across the US.

“I started off as brand ambassador for the company for almost a year and loved doing so because it was a brand I grew up being very familiar with,”

said the comedian/rapper about her early undertakings into business.

She initially started as a brand ambassador for Citi Trends for almost a year and after that, she says she loved doing it because for her it was a brand she grew up being very familiar with.

She eventually had the opportunity to pitch her products and out of that, she created the Pretty Vee electronic and Beauty collection.

In fact, she comes from a legacy of entrepreneurs and she intends on continuing to follow her dreams while inspiring the youth who are some of the largest supporters of her work.

Pretty Vee Was Also On A Music Video

As she continues to make a name in the entertainment and business industry Vee is also into acting pursuits. She has taken film and acting classes.

That being said, one could say Vee is enthusiastic about her future projects and continues to strive in her element of comedy. She is seemingly always looking forward to expanding her talents in other areas of the entertainment industry.

She has also been on the cover of Hype Hair. As for her acting career, she has starred in the 2021 short film, Desi and Vee Valentine and a full-length movie, Living My Best Life. The same year, she also starred in a movie, American Gangster Presents Big 50 – The Delrhonda Hood Story.

She Did Have A Boyfriend

Vee is quite open to sharing just about everything from her private affairs be it on her Instagram, Facebook, and Twitter. The one-time reality star, however, is yet to share even a glimpse of her dating life.

Some reports though suggest she once was in a relationship with a chef. Although she never revealed his name, he is known by his Instagram handle, timtboe.

While neither the ex-North Carolina resident nor the chef addressed the dynamic between the two, in November 2018, a picture emerged across social media where the alleged pair posed by the side of each other. And the tension between the two was indeed something couple-esque.

Further, the image came with a caption,

I’ll drop all my musty & crusty hoes for you bae, I promise @YesImPrettyVee,

written by the then-purported boyfriend of Pretty Vee.
The picture, nonetheless, has since been deleted from Pretty’s Insta. Conversely, the post still remains on timtboe’s. In any case, looking at her recent moblog, Vee seems to be pretty much single and deliberately choosing to stand on her own.
In Dec 2021, Pretty appeared in one of the songs of fellow rapper’s Rick Ross then-new album, Richer Than I Have Ever Been. What intriguing though were the speculations that Vee at the time was spending a lot of time at Ross’ mansion which led many to believe the two were dating. It, however, is yet to be confirmed.

There clearly is no certain number tagged beside Vee’s net worth. Yet, time and again, she has been reported to be a millionaire. Or at least someone who has her own venture worth in the seven figures.

The sources of her income go beyond her line of electronics and beauty products. There are also those sponsorship deals and paid promotions to consider when discussing the capacity of what she could be pulling.

In light of her flamboyant lifestyle which she occasionally flaunts over her social media, it goes without saying her financial standings are likely in the domain of hundreds of thousands to even millions of dollars.

Is Jenna Ortega Related To Nicki Minaj? The Truth Here