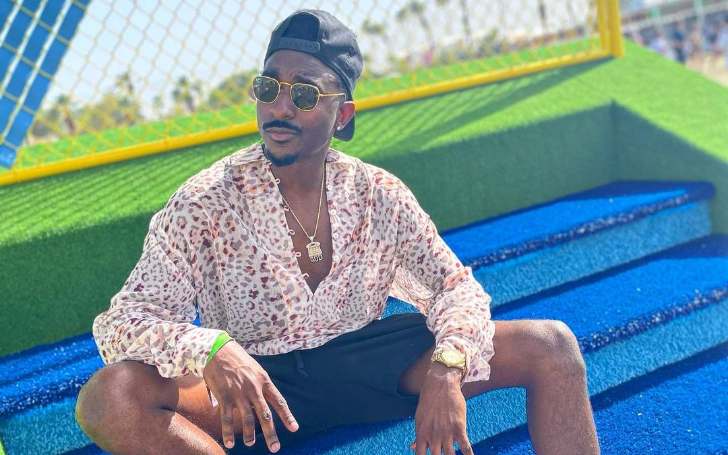 Well, Jordan was raised by his mother as his parents were separated a long time ago when he was still at an early age. He is hugely influenced by his mother which is why he followed the footsteps of his mom and entered the acting field just like her. So, how’s his relationship with his mommy? Apart from his career and family, is he dating a girlfriend?

Read the article to know the personal and professional life of the momma’s boy Jordan L. Jones. Further, we will also talk about his age, siblings, parents, his TV/ movies, and many more.

Who Is Jordan L. Jones? Details On His Age And Parents

As we mentioned above, Jordan is an actor. He was born to Billy Eugene Jones and Ptosha Storey under the star-sign Pisces on March 1, 1993, in the United States of America. So, as of 2022, he is 29 years of age and is the only child of his parents.

Up to the age of 5, he grew up in his hometown and after that, he moved to Los Angeles with his mother, as his mom migrated to Los Angeles to pursue her acting dreams. As for education, he attended the University of Southern California and graduated in the year 2016.

Besides, he belongs to the Afro-American ethnicity and is American as per his nationality.

Jordan’s dad Billy was an Atlanta native who graduated from the Yale School of Drama. Further, in his career, he performed in several plays like Much Ado About Nothing (NYSF), Pitbulls (Audelco nomination for Best Acto), The Jammer (Atlantic Theatre Company), and many others. Amongst all his work, he is best known for Wishbone, Hexed, and The Blacklist, alongside Catherine Missal, Elijah Spader, & others.

Similarly, his mother Ptosha is also an American actress and stage director famous for her portrayal of Nancy Hallsen in the prime-time soap opera The Oval. She is also a receiver of the Daytime Emmy Award for Outstanding Guest Performer in a Drama Series.

Jordan Was Raised Single-Handedly By His Mother

As we already said before, Jordan is the only child of his parents. At a very early age, Jones got to feel the absence of his father figure in his life as his parents got separated very earlier. So, he grew up alongside his mom Ptosha Storey, whom he also considers her father.

In fact, on the occasion of father’s day, he wrote to his mother a message which says,

I thank god all the time for not having my father in my life because… the life i have now i wouldn’t trade for anything. Happy Father’s Day to the best MOTHER god created.

Happy Father’s Day also to all the single moms out there making it happen when it looks impossible! this is not a knock on father’s. my mother just also was my father ☝🏾❤️. Happy Father’s Day to my mother, @ptoshastorey . Best Dad i could ever have❤️❤️❤️ #DBTH🙏🏾#CallGod🗣

Looking at the words he dedicated to his beloved mother shows how much he appreciates the lady who brought him up as a single parent.

Jones Is An Actor: His Movies And TV Shows

Ptosha’s son Jordan has been already in more than 16 movies and TV shows. He began his career after he graduate from college, where he directly started making effort to enter Hollywood and began giving auditions. Eventually, he landed roles in 2017 TV series like Wisdom of the Crowd, Future Man, and NCIS: Los Angeles, in which he appeared in a single episode.

After that, he got a chance to act in the 3 episodes of the 2018 TV series Disjointed. Following his initial work, he later did acting in the music video Miguel: Got Freinds and short movies and series like The COMMiTMENT, Shameless, Mainstream, All Rise, South Central Love, The Rookie, Snowfall, and many more.

His latest TV series is Bel-Air (2022) which is the reimagined series of the 1990 American sitcom The Fresh Prince of Bel-Air. In this latest drama series, Jordan portrayed the character of Jazz in 11 episodes of the series which helped him to gain popularity among a huge audience.

As per the information shared by Jordan, he also is involved in a stand-up comedy show. On July 18, 2019, he wrote on his Instagram,

popping my stand up comedy cherry tonight y’all! 😂😂😂 come watch some pure reckless talk come out my mouth 🤷🏾‍♂️😂 Some hilarious veteran comics will be performing, and also my dumb ass 😭😭😭 8pm tonight! Pull up on the kid!!! #DBTH🙏🏾 #CallGod🗣

A 29-years old actor seems to be single until now. As per our research, he is not in romantic affairs, or let’s say he hasn’t officially addressed his love life in front of the media. Likewise, on his social media account, he hasn’t shared any post from which we can assume if he is dating.

Without him revealing his relationship status, we can not come to a conclusion on whether he is dating a girlfriend or not. His social media handles instead suggest that he is rather focused on his career at present.

Talking about his social media handles, Ptosha Storey’s son is almost on all social sites. Jordan L. Jones is on Instagram under the username @jordanljones with 122k followers. Further, he also has a Facebook account with 1.2k friends.

Similarly, he is on Twitter under the username @JordanLJones_ with 8,149 followers. Moreover, a Bel-Air famed actor is famous on TikTok with 4 million views on his TikTok account.

Since 2017, Jordan is working as an actor and in 2022, he has already a grip on his professional career which has reached a new height. At such a young age he has been successful in achieving both name and fame. Considering all these, he surely has amassed a lot from his acting career.

Well, as per sources, he has an estimated net worth of $1.5 million. On the other hand, his actress mother Ptosha Storey has a fortune of $3 to $5 million as of 2022.