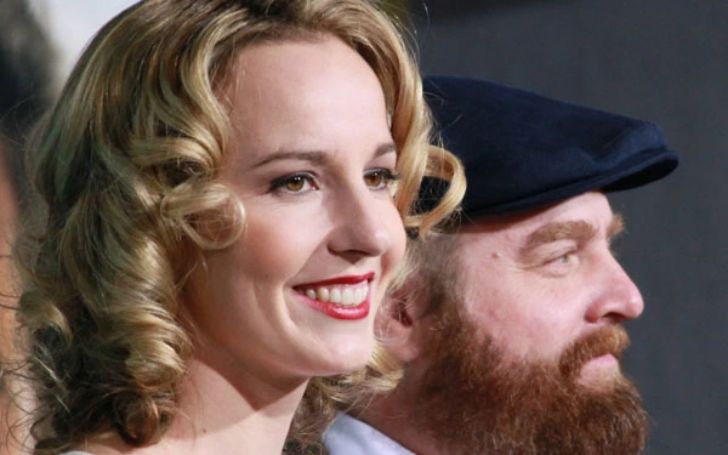 Quinn Lundberg is a successful businesswoman, charity worker, policy advocate, and professional dancer and is also better known as the wife of Zach Galifianakis. Her husband is an American actor comedian and writer best known for his acting in the movie Birdman.

Let’s dive right in as this article covers all the bits and pieces regarding Quinn Lundberg and cover facts about her early life, education, career, net worth, and more.

Who is Quinn Lundberg?

As we discussed earlier Quinn is a successful businesswoman, philanthropist, and professional dancer. She was born Mary Quinn Lundberg in Edmonton, Alberta, Canada in 1983. However, the celebrity spouse hasn’t shared any information regarding her parents. Talking about her age, she is 39 years old as of 2022.

As for her racial background, she is of Caucasian ethnicity and is Canadian as per her nationality.

Details Regarding Her Education

Talking about her education, Quinn is well diverse in the field of ballet and modern dancing. After completing high school she moved to New York to teach dancing and also joined Hunter College to gain an undergraduate degree in International Conflict Resolution.

Afterward, she joined the CUNY Baccalaureate for Unique and Interdisciplinary Studies to earn a bachelor’s degree in International Conflict Resolution. Furthermore, Lundberg also completed her Master’s degree in Public Policy from the University of California Los Angeles (UCLA) Luskin School of Public Affairs.

Quinn Lundberg is an Entreprenuer

Zach Galifianakis’s wife Quinn started her career working as a professional dancer and dance teacher. She later moved to New York where she met her friend Melissa Leschuck. The two shared the same passion and later opened their own business company Growing Voice in 2008. The company focused on providing support to local leaders in making required community changes. She worked as the co-founder and vice-president of the company till 2014.

Similarly, Quinn also co-founded a company named LOOM in 2014 and worked in it as the Chief Impact Officer till September of 2020. Currently, she is working as an Impact Consultant from 2020 to the present according to her LinkedIn account.

The husband and wife Zach and Quinn took the marriage oath on August 11, 2012, and the wedding ceremony was held at the UBC Farm in California. According to the US magazine, the ceremony was private, wholesome, and short. It started at 4 p.m. and by 5 p.m, most of the guests had already left.

Though the couple walked down the aisle in 2012, they had been dating from way earlier. Well, Zach even spoke about his now-spouse in a 2011 interview with Rolling Stone, where he spoke about his partner. Talking about Quinn, he said,

“Quinn is the coolest, The coolest.”

The two love birds have been married for over 10 years now and are enjoying a happy and blissful life living in their beautiful home in Canada with their two children.

Quinn Lundberg along with her hubby is blessed with two sons. She gave birth to her first son a year after their marriage on September 7, 2013. However, as secretive as the couple is when it comes to keeping their personal life private, they have managed to keep the name of their firstborn child far away from the media to date. Galifianakis even ditched his appearance at Toronto Film Festival to promote his movie You Are Here to be by his wife’s side.

Similarly, the couple had their second son on November 7, 2016, 3 years after the birth of their eldest son. This time the pair disclosed his name as Rufus Emmanuel Lundberg.

Back in 2011, did you know in an interview with Rolling Stone when asked about having kids Zach joking replied,

Quinn’s Husband Zach Galifianakis is an Actor and Comedian

Zach Galifianakis is an American actor and comedian born Zachary Knight Galifianakis on October 1, 1969, in Wilkesboro, North Carolina. He is the son of Mary Frances, a community arts center owner, and Harry Galifianakis, a heating oil vendor.

Galifianakis started his career debuting in Boston Common, a sitcom series, and appeared on Saturday Night Live for two consecutive weeks. He later hosted his show Late World with Zach (2002) on VH1.

Similarly, he is also a comedian by profession and currently hosts the talk show Between Two Ferns on the Funny or Die website.

What Is Quinn Lundberg’s Net Worth?

The celebrity spouse is estimated to have a net worth of $1 million. She has accumulated her wealth from her career as an entrepreneur, and an Impact Consultant.

Whereas, her hubby Zach Galifianakis is estimated to have a fortune of $40 million. He has accumulated his fortune from his career as an actor & comedian.

Is Quinn Lundberg on Instagram? Her Social Media Handles

The businesswoman, Lundberg is a very private person, she doesn’t have an Instagram account. Matter of fact, she isn’t active on any of the social media platforms.

On the other hand, her beloved husband Zach Galifianakis is active on Twitter (@galifianakisz) with a whopping 3.1 million followers.