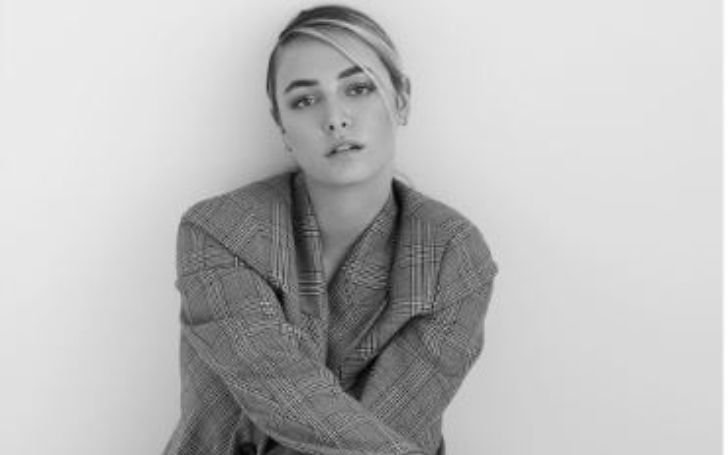 Raine Michaels is a model and actress born to celebrity parents Bret Michaels and Kristi Gibson. The rising star is best known for her photoshoot with the renowned brand Sports Illustrated.

Likewise, Raine is also popular for her works in films and TV shows like The Making of Bret Michaels, Bret Michaels: Life As I Know It, and The Last Sharknado: It’s About Time. Despite being born a celebrity kid, Raine has paved her own career path in the showbiz industry.

As her growing career has already made headlines, today we will focus more on her personal life. Is Raine still dating her boyfriend Matt Carol? Her diabetes problem, height, and more. Find out here.

How Old Is Raine Michaels In 2022? Details On Her Family & Early Life

The rising model Raine Elizabeth Michaels was born on 20th May 2000 in LA. She was born under the birth sign Taurus and is 22 years old now.

She is the older daughter of singer-actor Bret Michaels and his long-time girlfriend, Kristi Gibson. Likewise, her grandparents are Wally and Marjorie Sychak.

Talking about her ethnicity, the star kid has English, Irish German, and Swiss ancestry.

After high school, Michaels enrolled at Belmont University and studied journalism from 2018 to 2019. She went to Belmont only for her freshman year of college.

She then transferred to Arizona State University to study Bachelor of Arts and broadcast journalism. Raine graduated from ASU in 2022.

The model grew up alongside her younger sister Jorja Bleu Michaels. The 17 years old Jorja is an aspiring actress and songwriter.

Born into a family of celebrities, Jorja and Raine have been living amidst media and pap their whole life. As both of the Michaels sisters are growing up, they are creating their own career paths.

While Riane is a model as mentioned before, Bleu is trying her luck in music. She along with their rockstar father co-wrote Unbroken at just 12 years old.

Similarly, as an actress, Jorja has appeared in Bret Michaels: Life As I Know It and Mistrust. Hopefully, Jorja Bleu will make a big name for herself just like her model sister.

While thinking of Bret Michaels, the name Kristi Gibson automatically comes to our minds right? Well, the couple were first associated with each other in 1994 and started dating right away.

For the next 16 years, Bret and Kristi had a rocky on-and-off relationship. And in 2010, Michaels surprised his fans and followers when he proposed to the mother of his children in a romantic way.

He proposed to Gibson during the final episode of his TV show, Bret Michaels: Life As I Know It saying,

“I love you, and you’ve been unbelievably a big part of my life, and we have two beautiful girls together. I hope that we can find that inner love that we have forever. And I want you to be my wife.”

And without a doubt, Kristi Lynn Gibson said yes only for them to call off their engagement two years later in 2012. Though the former couple fell out of love with one another, they raised Raine and Jorja together.

Also, they are still good friends and hang out together.

Not to forget, she also walked for the Sports Illustrated Swimsuit show in Miami that year. Michaels talked about her incredible experience with FOX News saying,

“It was incredible, that’s all I can say. It was one of the best experiences I’ve ever had in my life. The whole week was just amazing. This was my first runway show ever and it was for Sports Illustrated. So this is a pretty big deal.”

Similarly, she talked about her shoot with Too Fab saying,

“I still haven’t seen the physical copy because in LA they don’t get it until like 3 or 4 days after it comes out in NYC, so when I get to see the physical copy for the first time it is going to be a really emotional experience.”

As per Michaels herself, her inspiration is an American model Kate Upton.

Apart from this, the model has also appeared in TV shows like The Making of Bret Michaels, E! True Hollywood Story, The Apprentice, Bret Michaels: Life As I Know It, Bret Michaels: Raine, and The Last Sharknado: It’s About Time.

Despite her celebrity background, the rising star has always been down to earth. As per her Linkedin bio, she has volunteered in four different organizations so far.

Bret Michaels’ daughter Raine joined Best Buddies International in 2010 while she was still in middle school. Likewise, she became associated with The Special Olympics during high school.

Similarly, she started volunteering with the animal rescue group Potcake Place in July 2016. Raine helps them with washing around 30 puppies and getting them ready for a beach walk with potential adopters.

Lastly, she started helping around in Conejo Valley Veterinary Hospital in April 2018. She contributes to the hospital by cleaning cages, helping hold pets, and assisting with bandage changes.

Does Raine Michaels Have Diabetes?

For Raine Michaels, life was not full of sunshine her whole life. Sadly, Raine was diagnosed with prediabetes or borderline diabetes at a very young age.

As she grew up watching her father take insulin her whole life, she was kinda scared of taking shots. However, Bret would reportedly take her to the Phoenix Children’s Hospital for treatment so that she felt better when she meets other diabetic kids.

As a kid, she had to eat low-carb and low-sugar foods in order to keep her sugar levels low. As per sources, her diet consists of veggies, salads, and lean meat. Fortunately, all of her efforts paid off.

As of now, Michaels doesn’t have any sort of diabetic problems, however, she still has to be careful about her sugar intake.

Is Raine Michaels And Her Boyfriend Matt Corral Still Together?

Coming straight to the point, Raine and Matt are no longer together. The couple was romantically linked with one another when Michaels was still in high school.

In 2021, the model even went to one of Matt Corral’s games to show her support. However, after that, no recent updates have hit the internet. Likewise, the pair have not addressed this matter.

Apart from this, the model has not been linked with any other guy. Similarly, now news of her past affairs has hit the media as for now.

According to various online tabloids, the model has an estimated net worth of $2 million as of 2022. Her successful modeling career brings her thousands of dollars.

Also, Raine has generated a decent amount from endorsement deals and commercial ads with brands and companies.

Michaels makes her time between NYC and Los Angeles. When in LA, she stays in her father’s $4.8 million contemporary-style Calabasas house.

The aspiring model Raine has over 2k followers on Twitter and over 110k followers on her Instagram. She goes by her user handle @rainee_m on both of the platforms.

Looking at her IG handle, most of her posts are work-related. She often shares photos from her shoots for her fans and family to see.