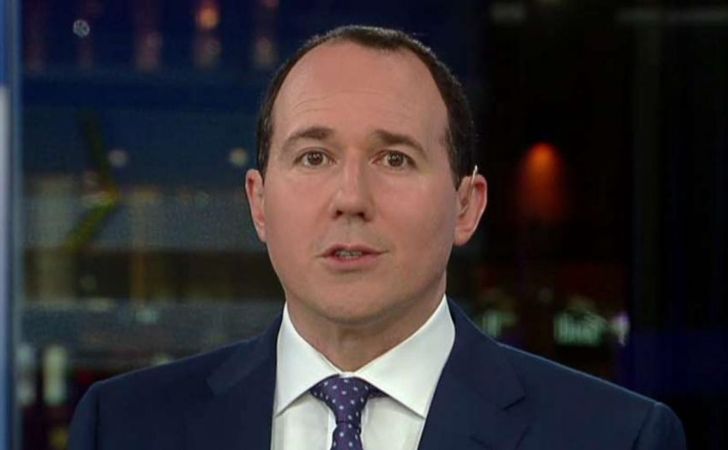 With a marriage already spanning a few decades, Raymond and his wife have set an example as a perfect couple. Moreover, the couple parents three children as well.

Well, who is Raymond Arroyo’s wife? When did they get married? Find answers to all your questions here.

Many of you might just get envious as Raymond’s wife Rebecca Arroyo is a beauty. The couple married on 13 November 1993 and has since been giving relationship goals with their perpetual compatibility.

Despite being married for over two decades, their relationship seems as fresh as ever. In fact, their bonding as a husband and wife has grown stronger instead.

Moreover, they also have three children together, two sons and a daughter. While their children are already grownups, they have tried to keep away their kids away from the chaos of media.

Not all get the opportunity to see their marriage sustain for so long, especially those who are in the constant spotlight. But unlike a lot of couples, Raymond and his wife are strong as ever.

With the utmost respect for one another, the couple has lived 26 sound summers together as of 2020. Moreover, back in 2017, the couple celebrated their 24th wedding anniversary alongside their family and friends.

In fact, Raymond even made a Twitter post with a picture of him with his beautiful wife Rebecca. He wrote “24 years of marriage…and we’re still having fun” with a hashtag #BlessedAndGrateful in the caption. Check out the post here.

Needless to say, they couldn’t look any more beautiful together. We wish them years and years of blissful marriage.

Raymond seems as romantic as ever. On 2019 Valentine’s day, he posted a beautiful picture to wish his beautiful spouse “Happy Valentines Day.”

A Happy Valentines Day to my better half…much love to the beloved Rebecca. ❤ pic.twitter.com/LwJWWoFSMH

It is rare to see a celebrity wife so shy and private about their life. But Raymond Arroyo’s wife, unlike most of the celebrity wives is very private when it comes to her personal life.  Rebecca loves her space and privacy.

Instead of getting carried away with the razzle-dazzle of glitz and glamour of the media industry, Rebecca chooses to spend her life in silence among her family and friends.

However, she does enjoy going out on outings with his kids and husband. As of 2020, the beautiful family of five reside in their beautiful home in New Orleans.

Rebecca Was Born on October 9

Raymond Arroyo’s wife Rebecca was born on October 9. In fact, the couple even celebrated Rebecca’s birthday together.

Raymond took to his Facebook to wish his beautiful wife on her birthday. “Happy Birthday to my beautiful Rebecca. Every day is a celebration with you!! Love ya,” he wrote in the caption.

Hundreds of their fans also wished Rebecca on her birthday.

The Loyal Husband Raymond is An Author, Journalist, and Producer

While Raymond goes by with a tag of a New York Times bestselling author, he is also a recognized journalist and producer of various successful TV shows.

Talking of his accomplishments as an author, he has so far written ten books with the biography of EWTN’s founder, Mother Angelica, being one of his successful works. The book “Mother Angelica: The Remarkable Story of a Nun, Her Nerve, and a Network of Miracles” happened to be the New York Times bestseller.

Similarly, as a journalist, Arroyo widely recognized as the host of the EWTN news program The World Over Live. He has also been the part of the Associated Press, the New York Observer, and has worked for the political columnist team of Evans and Novak.

Alongside, he featured on some of the prominent shows like The Today Show, Good Morning America, and Access Hollywood, “The O’Reilly Factor”, and various others.

He Is Active on Social Media

Similarly, he also has a decent follower on Instagram, however, his Insta profile is yet to be officially verified.