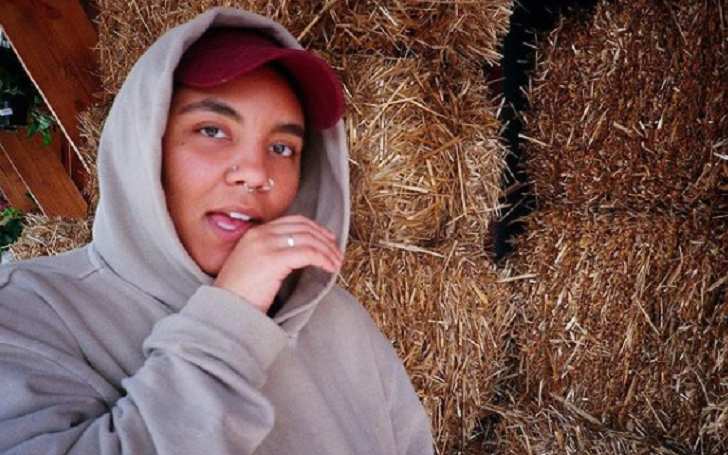 Rayna Tyson (aka Ramsey Tyson) is the first-born child of Mike Tyson from his second marriage with Monica Turner. Unlike her father Mike, Rayna has chosen a different career path, has been forging a career behind the camera. She has worked as a crew member for a few acting projects. Most notably, the young girl worked in an acclaimed psychological thriller Joker, starring Joaquin Phoenix who also won an Academy Award for Best Actor.

Besides, back in 2020, Rayna made headlines after getting involved in a brawl with the rapper Boosie Badazz that stemmed from his transphobic comments. After Rayan showed huge hard reactions towards the rapper’s bad remarks, many people started thinking about Mike Tyson’s daughter’s sexuality. We will answer all your queries in the sections below.

In addition, in this article, we will explore the detail of Rayna’s siblings, parents, & more!

Where is Rayna Tyson From? Details on Her Age and Early Life

The young star kid is from Bethesda, Maryland. She was born on Valentine’s Day (14th Feb.) 1996, to Mike and Monica. Talking about her age, Rayna is 26-year-old as of 2022. She spent most of her early life in her hometown of Bethesda, where the Tyson family had a $4 million worth mansion.

But, the luxurious house was later given to Tyson’s ex-wife Monica as part of their divorce settlement in 2003. Meanwhile, in 2020, Turner listed the house that gave the mesmerizing view of the Congressional Country Club golf course with an asking price of $9.75 million.

Married three times altogether, Mike Tyson married Monica Turner as his second wife. The former flames first met at a party at the New Jersey estate of Eddie Murphy in 1990. The two hit it off soon. However, things didn’t go well after Tyson was charged with raping then-18-year-old Desiree Washington, a beauty pageant contestant. Later on, the ex-boxer was sentenced to prison for six years.

As per authorized online tabloids, while Tyson was in prison, his then-girlfriend Turner stayed in touch with him. Their frequent meetings further solidified their romance.

In 1995, Mike got out of prison and the pair continued their romance more actively. Two years later, they tied the knot at the Bethesda house in April 1997. But, Tyson’s legal troubles didn’t resolve as the boxer was again imprisoned for a year for assaulting two motorists in 1999.

Despite all that, Monica coped with every problem with him but she couldn’t bear more when Mike started cheating on her. She finally filed for divorce in Jan 2002 and their divorce was finalized in 2003. Monica received $10 million in their divorce settlement.

Her Brother Amir is an ESPN Intern

Rayna has a brother, Amir Tyson, an intern at ESPN. He joined the network in 2017 and has still been working for the cable sports network. He attended the American University and majored in Broadcast Journalism with a minor in History.

In addition, the budding TV personality has also shown his interest in the business world. He is the founder of a clothing company named Debnoir Attire.

Tyson has four half-siblings including a brother, Miguel Tyson from her father’s relationship with Sol Xochitl. The exes also had a daughter, Exodus who, sadly, passed away at the mere age of four in 2009. Back in Feb 2019, Rayna posted a sweet photo of her late sister on the occasion of her 14th birthday.

Her other half-siblings including Milan and Morocco come from his father’s third marriage to Lakiha Spicer and an older half-sister, Mikey Lorna Tyson from her father’s previous relationship with Kimberly Scarborough.

Rayna Tyson is a Transmasculine and Nonbinary: Was Once After Boosie Badazz Due to His Transphobic Comments

Tyson’s daughter from his second marriage with Turner, Ryana is transmasculine and nonbinary. She is an ardent supporter of the LGBTQIA+ community. And if someone tries to go against LGBT or do some bad comments about them it will cost heavy for the commentators. The same case happened back in November 2020 when the rapper Boosie Badazz made inappropriate observations on trans issues in one of the podcast videos.

The artist first received huge backlash after he made his transphobic comments about Dwyane Wade and Gabrielle Union‘s trans daughter, Zaya in his Instagram live session. And the condition further became worse when Boosie again made some bad remarks, “Don’t cut [her] f**king d**k off, Dwyane” referring to his daughter Zaya in an interview with Mike Tyson in his podcast.

Soon after their interview, Rayna flew to Los Angeles from New York to physically confront the rapper for his bad comments. She told Them.us,

“[I saw it as] a good opportunity to educate someone about trans issues. He went into it with such little information. I decided I wasn’t going to intervene or step on any toes unless the conversation was completely out of hand.”

“Part of the reason why I wanted to talk to Boosie about it is because I’m a nonbinary person who’s socially transitioned amongst my friends and started a medical transition. I felt like I couldn’t not say something.”

Is a New York University Graduate

Talking about her education, Rayna went to New York University to study film in 2014. Her proud father announced the news via Twitter with the post,

“I’m so proud of my daughter Rayna. She’s been accepted into NYU Film School.”

As per her Linkedin bio, the star kid completed her graduation in 2018. She also got the nomination for the Best Film Student at the college in 2016.

A year after her nomination, Rayna worked behind the camera for The Death and Life of Marsha P. Johnson. She gained attention following her work as a crew member for the hard-hit psychological thriller film Joker. The movie’s main actor Joaquin Phoenix also received an Academy Award for Best Actor.

Rayna Tyson’s net worth is $500,000 as of 2022. Undoubtedly, his wealth is expected to increase in the coming days. She currently resides in Brooklyn, New York.