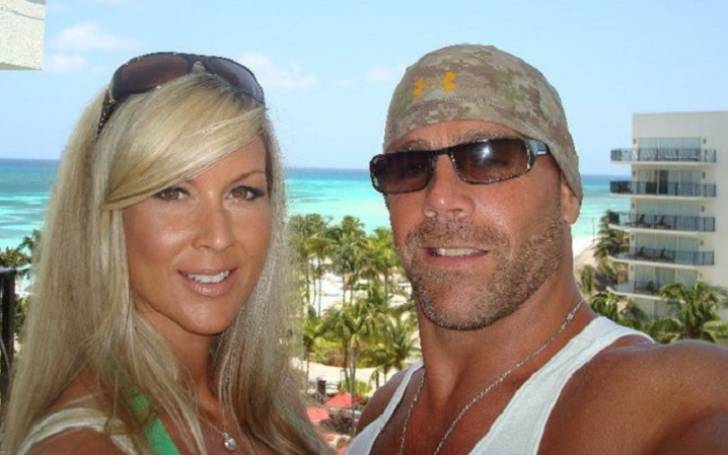 Rebecca Curci (aka Rebecca Curci Hickenbottom) is a former WCW employee who was in the dance group called The Nitro Girls, a group that performed on episodes of WCW Monday Nitro. But, Rebecca is more popular as the wife of Shawn Michaels, one of the most recognized names in the history of wrestling. Before his retirement, Michaels had been involved in several iconic feuds with numerous big names like Hulk Hogan, Triple H, Rick Flair, and more.

But, as of now, both Rebecca and her husband Shawn are enjoying their retirement life. They live on their ranch located in San Antonio, Texas. In addition to that, they also make few and far between appearances on TV.

Well, in the following article, let’s explore more about her professional and personal life!

What is Rebecca Curci Age? Her Early Life and Education

Curci is aged 48 as of 2022. She was born in Tampa Florida on 16th June 1973. Talking about her family details, some sources believe that her mother was reportedly a nurse at the local hospital, whereas, her father was an English teacher at a high school. As per her Facebook page, Rebecca also has a sister named Carol Siener.

Besides, her nationality is American and belongs to the Caucasian ethnicity.

What is Shawn Michaels’ wife Rebecca Curci doing at present?

As of 2022, the famed celebrity spouse is a stay-at-home mom who doesn’t involve in anything as a part of the job. But, in the past, Curci used to work in the wrestling industry being the part of a dance group known as Nitro Girls. They performed at WCW Monday Nitro, the professional wrestling TV program. And her stage name was Whisper, under which Curci performed in several episodes of the series from 1997 – 1998.

The following year, Rebecca went on to marry her hubby, Shawn. And the same year, she decided to terminate her contract with WCB. But, its president Eric Bischoff didn’t let her go initially. Later on, they eventually came up with an agreement.

In the meantime, Curci said that she wasn’t going to work with anyone for the following three years. She further said that she instead would want to be a full-time mother of her kids and help her husband to handle his finances.

How did Shawn Michaels meet his wife Rebecca?

It was back in the late 1990s when the wrestling legend Michaels noticed his future wife Rebecca on television. At the time, she was a part of The Nitro Girls. Ever since Shwan saw her on TV, he always would tune the TV every time just to watch her. He described her as “the most beautiful, sexiest woman I had ever seen,” in his book called Heartbreak & Triumph.

From that moment, Michaels never skipped a single episode of Nitro to see her. He also told about the girl to one of his best friends named Rich Minzer. A couple of weeks later, Minzer who used to work at a gym in California called Shawn to tell him that Rebecca and other girls from the show were around there. At the same time, Rich also went on to do some introduction with Curci and revealed everything about his wrestler pal.

Soon after, Curci decided to give him a number for Michaels without knowing anything about the fame he has had in the WWE industry.

However, Shawn didn’t rush on to call Rebecca but rather took his time so as to not leave an impression of a stalker. About the same, he writes in his book, Wrestling for My Life.

“I was reluctant to call Rebecca because I felt like a stalker.”

Soon enough, the WWE star decided to give her a call but she didn’t pick it up at the time. He mentioned in his book Heartbreak & Triumph,

“She returned my call that evening, and we talked for a couple of hours.”

“We continued talking every night for the next two weeks. Neither of us slept much, and we would talk until four in the morning. Then we’d hop on the computer and e-mail each other back and forth. It was puppy love running amuck.”

For the next few weeks, they kept busy talking over the phone and an e-mail. And they eventually met face to face when Curci came to San Antonio, Texas from Atlanta to see him. Upon seeing such a beautiful girl, Michaels was immediately smitten with her. After they spent a couple of days together, Rebecca made her move back to Atlanta.

Shortly afterward, they again met during Curci’s photoshoot. It was when Michaels eventually explained his feeling towards her while both of them were at the airport. And Rebecca also said yet.

Is Shawn Michaels still married to Rebecca? Their Wedding Details

Rebecca and her spouse Shawn tied the knot on 31st March 1999. Their wedding ceremony was organized at the Graceland Wedding Chapel, in Las Vegas. And they wed in front of only an Elvis impersonator.

It’s been over two decades that the duo are married and their conjugal life is still going pretty well.

In the past, Rebecca’s hubby Shawn was married to Theresa Lynn Wood. The two were in a marital relationship from 1988 to 1994.

Rebecca Curci is the mother of two kids

Six weeks after her marriage to Shawn, Rebecca got pregnant with her first child. And she gave birth to her son Cameron Hickenbottom on January 15, 2000. She and her husband Michaels welcomed their second child a daughter named Cheyenne Michelle Hickenbottom on August 19, 2014.

At present, Curci lives on a family ranch in San Antonio, Texas with her family.

Rebecca Curci Was Accidentally Punched By Chris Jericho in the Ring

Back in 2008, Rebecca’s husband Shawn was involved in a big WWE feud with his rival Chris Jericho. It all began when the two were face to face inside the ring. At the time, Michaels who was with his wife in the ring was supposed to announce his retirement from WWE. But Chris didn’t let him go without being a part of any drama over the ring. Michaels then looked at Chris and said,

“I want you to do me a favour…I want you to go home sit your wife down, your kids down, look them in the eye and tell them that daddy will never, ever be Shawn Michaels.”

In their heated argument, things became more complicated when Chris tried to punch him. But Shawn ducked and the punch badly hit his wife on the face.

Before the incident took a bad turn, Rebecca herself mellowed the situation by saying, “Is this the best you have, Jericho?” which drew a big laugh from everyone.

What is Rebecca Curci’s net worth?