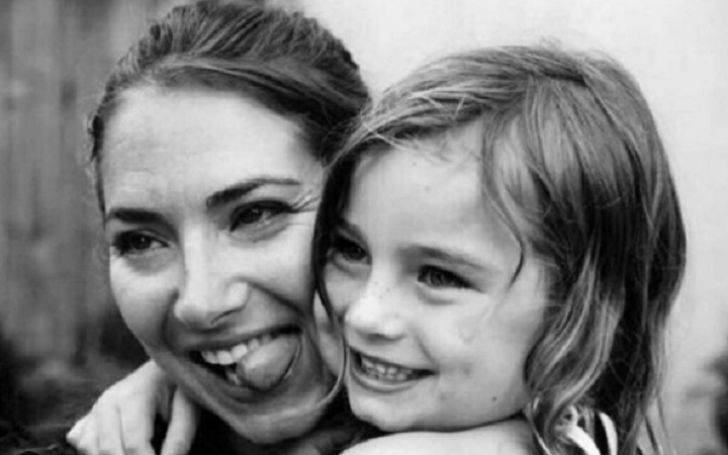 If you have ever watched one of the breathtaking action movies the Fast & Furious franchise, if yes, you haven’t probably gotten over Paul Walker‘s sudden and tragic death. The late Hollywood star was killed in a dreadful car accident.

Although the actor never married, Walker had a daughter Meadow Rain Walker with his ex-girlfriend Rebecca McBrain (aka Rebecca Soteros). Rebecca was leaving in Hawaii at the time of her ex’s death but promptly did move to California to support their daughter at such a heart-wrenching time.

Well, find out, how is Rebecca’s life going after the tragedy? Know about her relationship with her grown daughter Meadow who hasn’t share a single photo of her mother on her social media handles. Many unknown details are here!

Where is Rebecca McBrain From? Her Mother Died at 48

McBrain is from California who was born in 1974. She is the daughter of Julie Ann and Mark Soteros. Sadly, her mother Julie passed away at the age of 48 in July 2004. She grew up along with her one younger brother named Joshua.

McBrain is the Former Girlfriend of Paul Walker: They shared a daughter

The two began dating back in 1998. Paul was a fresh face in the entertainment business at the time with a few projects under his belt.

After some time in a relationship, the couple welcomed their daughter Meadow Rain Walker on 4th November of that year. Sources say, soon after the birth of their daughter, Rebecca asked her then beau to get married but the actor wasn’t ready at the time because of his rising Hollywood career. The duo then separated mutually.

Many sources reported that frequent arguments between Paul and Rebecca due to her dirking habit was the main reason behind their split. She was even arrested for driving under the influence (DUI) twice in the past. Soteros was first arrested for DUI in Newport Beach, California in October 2003. For the second time, Paul’s ex pleaded guilty to the same case in Hawaii.

At the time of their separation, their daughter was a toddler. Meadow then spent the majority of her childhood with her mother in Hawaii but made her move to California to be closer with her father in 2011.

The father and a daughter shared a strong bond with each other. Her actor dad also wanted to take a hiatus from his busy acting career to become a full-time father. He told in an exclusive interview with EW,

“My heart was desperate for so many years with the situation with my daughter. She’s living in Hawaii and she’s there and I’m running here. My daughter lives with me full time now and she’s the best partner I’ve ever had. It’s so nuts. I’ve never had anything like this in my life.”

Apparently, the actor was also on good terms with his baby’s mama Rebecca who lived in Hawaii. Unfortunately, both father and daughter couldn’t spend much of their time after Paul died tragically in the car accident.

Rebecca and Her Daughter’s Life After Paul’s Sudden Death

The sudden and tragic demise of the actor shocked everyone but it mainly devasted his daughter. He was attending the charity organization Reach Out Worldwide for victims of Typhoon Haiyan (Yolanda) when the tragedy happened. His daughter was also at the same event at that time. But, Rebecca was in Hawaii who flew to California soon after the incident happened to be with their daughter.

Meadow posted an emotional message on her Facebook at the time,

“When I was little he taught me to walk, taught me to smile, and taught me to never give up. I love him even before I knew what love was. He was my hero. My REAL life hero! He will always be in my heart! It brings tears in my eyes as I write this. You’re gone, but not forgotten! R.I.P Dad!”

Walker was in a car along with his race driver friend Roger Rodas. It crashed into a tree in Santa Clarita when Roger lost control.

After Walker’s death, Meadow became the sole beneficiary of her father’s possessions including a $25 million net worth.

Back in March 2014, the late actor’s mother Cheryl Ann Walker petitioned to be a legal guardian of her grandchild Meadow, alleging the baby’s mama had an addiction to alcohol. But, an insider told E! News that Rebecca is always a good mother and also shares a beautiful relationship with her daughter.

“She loves her. he has always been and will always be a good mother and there is no reason for a change. She will fight this, I’m sure, until her last breath to be [Meadow’s] mom. All she wants is to have her child.”

But, a few days after Cheryl’s filing, Rebecca told Cheryl about her quick decision to go to a rehab facility. As per TMZ, the grandmother of Meadow then promised she would drop the case of guardianship if she could complete the program.

Many tabloids reported that Paul’s former flame Rebecca MacBrian was married to Nicko McBrain, the drummer of the heavy metal band Iron Maiden. However, the lady who has been in a marital relationship with Nicko isn’t Paul’s former girlfriend Rebecca. First of all, Nicko is married to a woman since 1989. And on the other hand, Walker’s ex real name is Rebecca Soteros as per a genuine online source Daily Entertainment News.

Besides, once a New York Post mentioned in its article that Paul’s only daughter Meadow’s mother is his ex-girlfriend Bliss Ellis. Since the article published, many sources have also reported that Meadow’s mother is Bliss. In fact, it was later turned to be a hoax.

What is Rebecca Doing Now?

Soteros has, however, kept her every detail to herself. The ex-celebrity girlfriend is neither active on any social media platforms.

Tabloids reported that Rebecca currently resides in Los Angeles and is doing a teaching job there. She also reportedly plays a behind-the-scenes role for a few charity organizations. One of the non-profit organizations Soteros supports can be the Paul Walker Foundation which was established in 2015 by their daughter Meadow. It mainly helps students who are interested in marine science educations.

Her fortune is $250,000 in 2021. Other than that, there is nothing about her wealth and properties that belongs to her.

Besides, talking about her late ex-beau Paul’s riches, he had $25 million at the time of his death. He mainly earned the money from his work in several hit movies and TV shows.