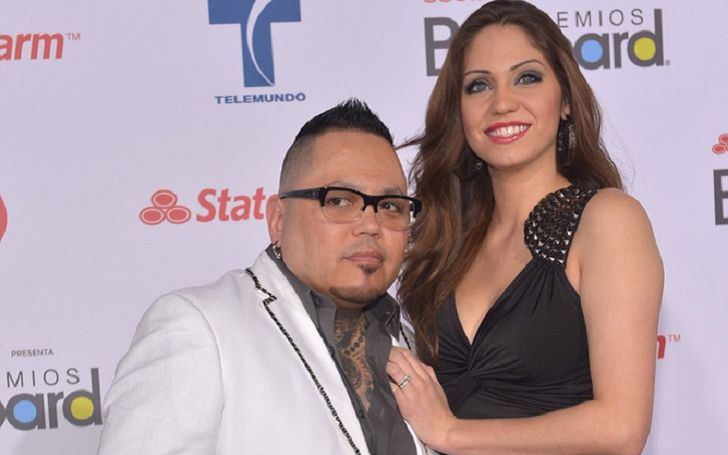 Rikkie Leigh Robertson is the ex-wife of the famed musician A. B. Quintanilla, the older brother of one of the greatest singers Selena. The former duo remained married for around a year before they separated amicably.

Besides, Rikkie is a promising model by profession. She has already worked for a few modeling agencies over the past several years.

However, since her separation from A.B., Robertson maintains a low-key life. Therefore, in this article, we will try our best to find out everything about A.B. Quintanilla’s ex-wife. Let’s zoom in!

How old is Rikkie Leigh Robertson? All About Her Childhood

Rikkie was born on 14th March 1988, in Texas, the United States. Her age is 33. The information regarding her parents and early life still remains grounded. She grew up in her hometown of Texas along with her family.

As for her nationality, Robertson is an American and belongs to the Caucasian ethnicity.

Who is A. B. Quintanilla’s ex-wife Rikkie Leigh Robertson?

Robertson is a model. She has worked for some well-known agencies and brands to date. However, further details about her professional endeavors are yet to be revealed.

Talking about her former husband, Quintanilla, he has built a successful path in several fields such as record producing, songwriting, and more. He used to play guitar and write songs for his late sister Selena. Some mega-hit singles that A.B. had worked for his sista include ‘Como la Flor’, ‘Amor Prohibido,’ and ‘No Me Queda Más.’

Furthermore, along with Selena, Quintanilla released a number of albums such as ‘Mis Primeras Grabaciones,’ ‘Entre a Mi Mundo,’ and ‘Dreaming of You.’ Back in late 2012, his then-spouse Rikkie also popped up on the single, ‘Solo’, from the album ‘Blanco y negro.’

Besides, the versatile artist has earned numerous accolades for his untiring work in the entertainment industry. Some of them include Regional Mexican New Artist of the Year, Latin Billboard Music Awards, and Latin Grammy Awards.

Rikkie Leigh Robertson Failed Marriage With A. B. Quintanilla

The former duo began dating back in the late 2000s and they were in a relationship for over two years before they exchanged vows. Rikkie tied the knot with her then-boyfriend A.B. on November 12, 2011. The two organized their intimate and simple ceremony in Corpus Christi, Texas.

Their big day was attended by their family members and friends. On the day, the bride opted for a white gown with a simple black ribbon at the waist.

Leigh and Quintanilla kept their love life a secret while they were together. They scarcely made public appearances throughout their short-lived marriage. The former flames were seen at the Billboard Latin Music Awards function held at Bank United Center on April 26, 2012.

Rikkie and Quintanilla couldn’t remain as happy as husband and wife as they were girlfriend and boyfriend. Just around a year after tying the knot, they ended their marriage in a divorce. In Jan 2013, Quintanilla exclusively revealed to PeopleEnEspanol that his marriage with Rikkie was over. Back then, he said they hadn’t been together for a couple of weeks,

“I have not [been together] for two weeks. We are officially divorced”

Talking about the situation, the artist said the tabloids,

“It’s difficult for me. But I am not alone because I clearly have my mother, my father, who love me very much; my sister Suzette; to my children, that I adore. I am surrounded by family, the group. I have a lot of positive things [in my life] and right now I have to be mentally positive.”

Furthermore, the artist revealed there was no cheating or other betrayal involved in their decision to separate,

“There were no infidelities. I lived a very happy year. I really thought that this marriage was going to last, that I was going to be with [her] forever.”

So, it seems the two separated on mutual understanding. Some sources even reported Rikkie and A.B. are still good pals.

Besides, the two didn’t have any children.

What is Rikkie Leigh Robertson Current Marital Status? Who is Her Current Husband?

Well, after her separation from her first husband, Quintanilla, Rikkie remained out of the public eye for a few years. She didn’t date anyone publicly for a long time. However, if we go through her Instagram posts, we can clearly see she has been in a relationship with David Gonzalez for a long time now.

As of now, the couple is happily married. Rikkie and her husband, David exchanged vows on February 23rd, 2021. We can say this for sure as Rikkie herself has mentioned the date on her Facebook profile. Besides, she also shared a snap of her with her newlywed husband, David on her Instagram on 23rd February with a caption, “The greatest anniversary gift we could have ever had! February 23rd. 3years together, 1 day married.” Here is the post.

Meanwhile, Rikkie’s hubby also shared the same snap writing “We did a thing and now I’m married to not only the woman of my dreams but my soulmate as well,” in the caption.

As Rikkie mentioned, she started dating her current husband on February 23rd, 2018. When it comes to when and how they met, the pair once revealed they first came across in the early 2010s in a tattoo shop. In an Instagram post back on July 4, 2018, David wrote “Love at first and the last sight” mentioning Rikkie. And in the comments below, Rikkie herself wrote, “First sight? Meaning lk 6-7 years ago in the tattoo shop?”

Meanwhile, on October 3, 2018, on what she mentioned the “national boyfriend day,” she shared some of her photos with her then-boyfriend on her Instagram. Alongside the post, Rikkie wrote a lengthy text dedicated to her beau, mentioning how happy and blessed she was to have a dream lover like him. Have a look:

Despite his tremendous success in the music industry, A. B. Quintanilla seems a little bit unlucky when it comes to his marriage. He went through three failed marriages. He first married Heather Grein and then tied the knot with Brenda Ramirez for the second time. His third wife was Rikkie.

But, Quintanilla is now in a blissful marital relationship with his fourth wife Anjelah Orellano. The two exchanged their vows in Sept 2019, in Las Vegas. He also has eight children from his multiple relationships.

What is Rikkie Leigh Robertson Net Worth?

Her net worth is $500,000 as of 2020. She has earned such considerable money from her modeling career. On the other hand, Rikkie’s ex-hubby Quintanilla has an estimated wealth of $5 million.

Tags: A. B. Quintanilla, Celebrity Spouse