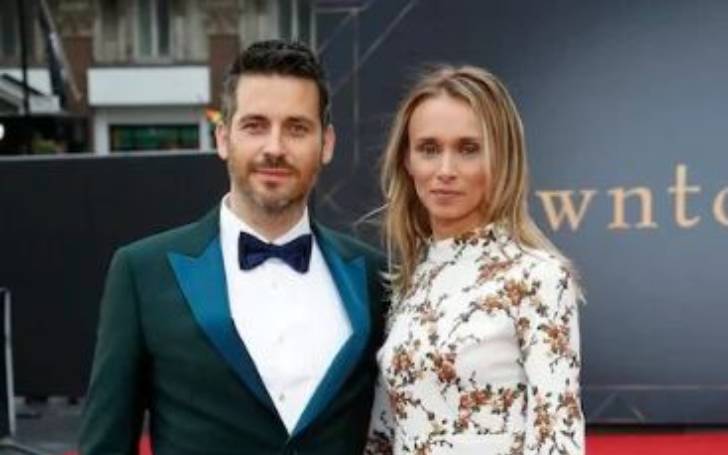 The couple began dating in the mid-2000s and gained huge media attention in 2007. As of now, they share a son together but they’ve kept details of their wedding and love life away from the spotlight.

Today, we will unveil the details of their relationship, marriage, respective careers, and many more. Also know more about Robert’s wife Lauren Chandiram with us.

The celebrity spouse Lauren Chandiram was born and raised in the United Kingdom, though details of her parents and birthdate are not revealed at the moment. She is English and has a mixed ancestral background.

As Chandiram is a private person, she has also not talked about her family background, siblings, and her educational qualifications.

On the other hand, her husband Robert James-Collier was born Robert Collier on 23rd September 1976 in Salford, Greater Manchester, England. He is the son of Anne Collier and James Collier.

The actor added James as his middle name in order to avoid confusion with another actor with the same name as his. He will turn 46 years old in 2022.

What Is Lauren Chandiram’s Profession? Is She Also An Actor Like Her Husband?

As we mentioned earlier, Lauren is a low-key person and likes to maintain a private lifestyle. Apart from attending events with her husband, she rarely makes public appearances making it quite difficult to keep up with her.

It is believed that she use to run a clothing store while she was living in Buckinghamshire, but it was never confirmed the couple themselves.

Moreover, she is also not involved in the showbiz industry, unlike her husband. With that, we can safely say that Lauren’s current profession is away from the media at the moment.

Chandiram’s Husband Is An Actor- His Brief Career Details

Looking at Robert James-Collier’s current success in the acting world, no one would probably believe that the actor hit it off by fluke. The actor stepped into the showbiz industry while helping out a friend who had asked him to fill in for an actor who failed to show up.

After this, James took his newfound interest seriously and started taking acting classes. He landed his debut role as Alex in the TV film Perfect Day.

Collier then went on to audition for the BBC One TV drama series Down to Earth and luckily he got himself a recurring role as Nicky Christy. Some of his other early projects are Shameless, Casualty, Dalziel and Pascoe, and others.

Robert landed his major breakthrough role as Liam Connor in the British soap opera Coronation Street. He appeared in the show from 2006 to 2008 and won Best Exit- British Soap Awards and Sexiest Male– Inside Soap Awards in 2007 and 2008 respectively.

After that, Robert’s luck shone again and he got the role of Thomas Barrow in the historical drama series Downton Abbey. This eventually became his biggest project of all time.

The British actor played Thomas Barrow for about six years in the historical drama series Downton Abbey. The show was a huge success and even went on to release two films in 2019 and 2022.

With the show’s success, the actors and actresses also kissed the heights of success without a doubt. However, after the show ended, Robert James-Collier faced a problem when he was unable to land any further projects in Hollywood.

He also revealed that he was homebound for seven months waiting for a new role/project after the show’s end. He openly accepted that it was hard for him to land a role in any particular film and TV show of his interest saying,

“Some people see me and think ‘You’re on Downton, it’s really easy, you’ll get loads of work.’ But unfortunately, it’s not the case. It’s hard to get work as an actor. 99% of actors will spend more time out of work than in, and that’s just a fact.”

Similarly, he also revealed that his lack of acting success in Hollywood is due to the fact that his gay character in the show lead to typecasting. He further added,

“You get a lot of interest, but it’s not necessarily the stuff you want. That’s not to say it’s bad, you get offered parts in films, this film, that film, but the subject doesn’t interest you or whatever,”

As of 2022, he plays Martin Evershed in the British comedy-drama series Ackley Bridge and Saul Silva in Fate: The Winx Saga.

The beautiful couple made headlines with their relationship only in 2007 during the premiere of Downton Abbey. It was their first red carpet appearance as well.

Apart from this, information about their initial relationship phase is not known. It is believed that the pair started dating somewhere in mid-2000 when Robert was still trying to break into the acting world.

As of 2022, they share a son named Milo James-Collier. Milo is reportedly 10 years old in 2022. Besides this, Robert and Lauren have remained mum about their wedding history. The couple is surely living a whole another life away from the camera.

As we’ve already discussed Robert’s profession, he mainly earns from his career of over a decade. According to various online sources, Collier’s current net worth is around $1.2 million in mid-2022.

On the other hand, Lauren’s net worth is reportedly around $500 thousand. As her career is under the radar, so are her earnings.

The mother of one is not active on any social media platforms. As surprising as it may sound, even her husband Robert is not on Facebook, Twitter, Instagram, and others. Although there are several fan pages with his name, Collier has not confirmed his presence out there.