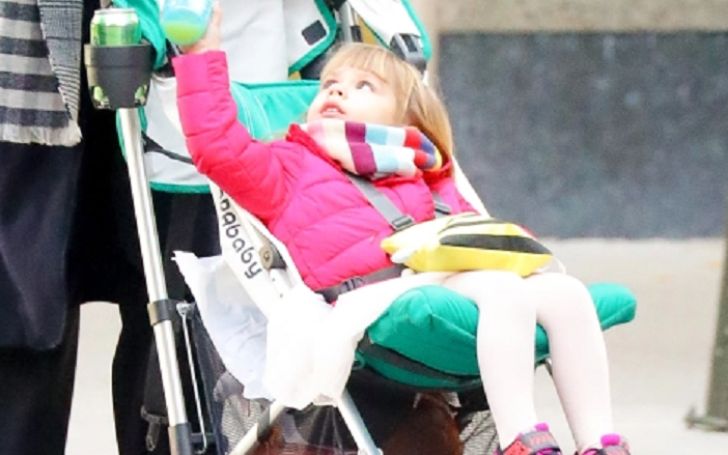 Rose Dorothy Dauriac is the daughter of Scarlett Johansson and her second husband Romain Dauriac, an owner of an independent creative advertising agency. But, you probably better know about Rose’s mother Johansson, the iconic Hollywood actress with the name tag of the ninth-highest-grossing box office star of all time. Widely known for her acclaimed roles in Marvel’s hard-hitting movies, her mom Scarlett has also received a plethora of accolades including two Academy Award nominations.

Prior to her distinguished Hollywood career, the actress is likewise known for keeping her personal details notoriously behind closed doors, especially, when it comes to her daughter Rose’s life. Scarlett even doesn’t allow the paparazzi to click pictures of her daughter. But, the super actress revealed some sweet facts about Rose from her girly dressing style to her upbringing on a few TV talk shows.

So, here we are to find out more interesting facts about Scarlett Johansson’s daughter Rose. Let’s check the following article out!

How old is Scarlett Johansson’s daughter Rose in 2022? All About Her Date of Birth

Rose Dorothy Dauriac’s age is 7 as of 2022. She was born on 30th August 2014, in New York. At the time of her birth, Marcel Pariseau told CBS News that “mother and daughter are doing well.” Pariseau further added Rose’s parents are seeking privacy for their newly-born-baby girl. Both of them are also big supporters of the No Kids Policy, an effort that helps to keep the images of celebrities’ kids out of the public eye.

Besides, the pregnancy news of the Black Widow star first came out back in March 2014. Even while she was pregnant, the actress also remained secretive and even skipped out on several Hollywood events and other programs. And even on her occasional public outings, the Marvel actress was seen fully covering up her growing baby bump.

But, after the baby girl came into this world, Johansson said in an interview with Us Magazine in 2015,

“When she came out of me, I was so surprised. I had a very strong picture in my mind of what my baby would look like. And, of course, she is completely different… perfect, but not what I’d imagined.”

Furthermore, in July of 2021, the actress told Kelly Clarkson that she wants to spend more time with her little girl,

“She shadows me, like, all the time which is wonderful. And I know that it’s something that I’m sure in a few years she’s not going to want to have anything to do with me and I should soak it all up.”

The Avengers: Infinity War star continued, “But there’s definitely times where she’s on the other side of the bathroom door and I’m like, ‘Rose, you gotta give me a minute! Everybody needs their time.”

Her dad Dauriac is a media personality who was once the editor of Clark, a French magazine that focuses on the urban art world. He later started his own independent creative advertising agency. But most of all, Romain grabbed huge public attention as the ex-husband of Scarlett.

Johansson, who has been married three times has had her fair share of ups and downs in her love life. The actress was first married to the Canadian actor Ryan Reynolds in 2007. The pair got engaged in May of 2007 and married in September of the same year. Nevertheless, their marital relationship didn’t go long and it broke down in late 2010. The exes officially divorced in July 2011.

For the second time, Scarlett went on to marry Frenchman Romain Dauriac. They tied the knot in October 2014, a couple of months after their daughter was born. Their wedding ceremony took place in Phillipsburg, Montana.

However, Johansson’s marriage with Romain also couldn’t be last long as they filed for divorce in 2017. Online tabloids said that the two had separated a few months before the news came out.

Since 2020, the actress has been married to comedian Colin Jost.

Rose’s parents’ Divorce Finalization: Does Scarlett Johansson have full custody of Her Daughter?

Soon after their separation, Scarlett and Romain were involved in a custody battle of their only daughter but eventually agreed to share equal custody of the kid. However, Johansson’s busy schedule came up as a problem in the finalization of the custody battle.

Well, at present, things seem to be okay between the former lovers. They are doing their best to raise their daughter in as much normalcy as possible.

Besides, amidst the custody battle, Johansson requested all the parties to keep the privacy of their daughter and dissolution of her second marriage. She released a statement,

“As a devoted mother and private person, and with complete awareness that my daughter will one day be old enough to read the news about herself, I would only like to say that I will never, ever be commenting on the dissolution of my marriage. Out of respect for my desires as a parent and out of respect for all working moms, it is with kindness that I ask other parties involved and the media to do the same. Thank you.”

Talking to Vanity Fair in November 2019, the actress talked about co-parenting her daughter with Romain is hard but they are working as a team for the sake of their girl. She said,

“You know, understanding what it is to coparent — that’s a very specific thing. It’s hard to raise a child with someone you’re no longer with. It’s hard.”

You have to prioritize your child and not put yourself in the middle. It has its challenges.”

Just a couple of months ago, one source first talked about Johansson’s second pregnancy and told Page Six, “Scarlett is actually due soon, I know she and Colin are thrilled.”

Her pregnancy rumors first sparked when the Avengers star didn’t appear at several “Black Widow” events. Instead, Scarlett was doing promotional appearances via Zoom. She has also skipped out on a number of other programs.

Who is Rose Dorothy Dauriac?

Rose is a star kid who has been in the media as a highly secretive daughter of Scarlett Johansson. Despite being born into such a high-profile family, Rose’s mother didn’t let any media release a single official picture of the girl.

But, the most protective mother opened up some interesting facts regarding Rose on a few TV shows.

Back in 2018, when Johansson appeared on The Ellen Show, the actress opened up that her baby girl loves to dress up, especially when her outfits matched with Disney princesses. She said,

“She’s very, very, very girly. Like, painfully girly. It’s crazy. I thought I was girly but she is–she wants to like wear the princess dress to bed, and she wants to wear it to school, and it’s like, filthy. New York is not the best place to like have fabric dragging around behind you. But yeah, she’s a princess-obsessed little girl.”

In the meantime, Scarlett said about having the daughter is “full of hope and positivity.”

The same statement Johansson repeated in an Extra TV interview while promoting JoJo Rabbit in October 2019, “Being a mom and having a young child was so helpful. That gave me a lot to draw from.”

The notorious private mother Scarlett disclosed it’s not such hectic to eat her daughter fruits and veggies. Talking about Rose’s eating habits, Scarlett explained that she is not a stickler at mealtimes and never forced her to feed anything, “It’s funny, but I think I never really had to trick her into eating healthy. I think [it’s best] just letting kids discover food that way without making it feel like a chore.”

Johansson added, “Everybody has a different palate. I’ve never tried to force my kid to eat anything she didn’t like, and I never tried to hide any foods from her because I was trying to pack in an extra carrot.”

In 2018, on The Ellen Show, Johansson said that her daughter doesn’t know more about her acting profession. When DeGeneres asked,

“So, does she know that you’re like a superhero? Does she understand that?”

Scarlett answered, “Well, she thinks that’s what I do. Like if you ask her what I do for a living, she says, ‘mommy’s a superhero.’ And then one day … I was going into the office like I was not doing anything film-related. I was like, ‘alright, I’ll see you later honey, mommy has to go to work.’ And she was like, ‘who are you fighting?”

Know About Her Low-Key Lifestyle as a Star Kid

As we have mentioned earlier about Scarlett’s tendency of keeping things private. The protective mother has likewise kept Rose entirely out of the public eye, thanks to her ability to keep things to herself.

But, being the daughter of such successful parents, we can say undoubtedly that Rose lives a lavish lifestyle.

Her Mom is the Highest-Paid Actress

Born and raised in Manhattan, New York City, Rose’s mom Johansson began an acting career from an early age. She initially performed in an off-broadway play before making her film debut in the fantasy comedy North. The actress gained early popularity after playing the role in Manny & Lo.

Gradually, Scarlett started playing big roles in movies like Girl with a Pearl Earring, A Love Song for Bobby Long, Break Up, and more. She swiftly transitioned into Marvel movies, playing a variety of iconic roles in films like Iron Man 2, We Bought a Zoo, The Avengers, and more.

The films that Scarlett has starred in have grossed over $14.3 billion at the box office worldwide. And Johansson has also been named the ninth-highest-grossing box office actress of all time in Hollywood.

Rose is still a kid. So, there is no precise figure of her net worth. But, talking about her mother Johansson’s fortune, the once-highest paid actress has a $165 million net worth in 2022. Needless to mention, her main source of income is her fabulous acting career.