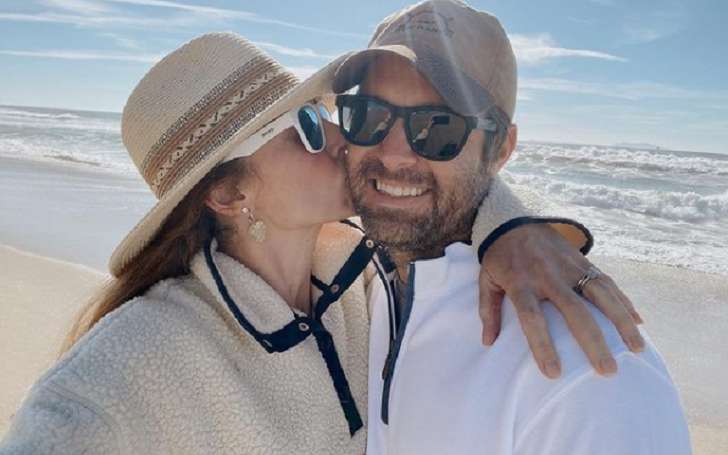 Ryan Goodell (aka Ryan C Goodell) is a former musical artist who was a part of the former boy band, Take 5. The group performed for around four years until it was dissolved in 2001. He currently works as an attorney at Morris Yorn Barnes Levine Entertainment Law Firm.

Besides, Ryan came into the light following his marriage to an actress, Nikki DeLoach. The couple has been leading a blissful married life for over a decade. They are also proud parents of two children.

In today’s article, let’s talk about Ryan’s professional and personal life in detail.

How old is Ryan Goodell? Details on His Early Life

Ryan’s age is 41. He was born on 29th June 1980, in Minneapolis, Minnesota. He spent a greater part of his early days in Minneapolis along with his family. Talking about his nationality, Goodell holds an American nationality and is a Caucasian as per his ethnicity.

Talking about his academics, Ryan studied at the University of California, Los Angeles, graduating with political science.

Ryan Goodell grew up along with his two siblings; a brother, Jeffrey Clayton Goodell (aka Clay Goodell), and a sister, Courtney Goodell.  Like him, his younger brother Jeffrey is a former musical artist. Both the Goodell brothers were members of the same band.

Talking more about Jeffrey’s education, the former pianist attended the University of Southern California, Los Angeles. He graduated with a bachelor’s degree in film and television production and theater arts in May 2007. He later started working in the Art Department on television shows. Some of his TV credits include Big Brother 8, Big Brother: All-Stars, and more.

Ryan Goodell was a Pianist at ‘Take 5’

Nikki DeLoach’s husband is a former member of the now-disbanded boy group, Take 5. He used to play piano along with his younger brother Jeff. Other members of the band were Tilky Jones, Stevie Sculthorpe, and Timothy Joseph Christofore.

The group released a number of albums such as The Tide Is High, Girl Of My Dreams, Sunrise Goodbye, and more. They released ‘King Of The Lollapat’ with the girl group, Innosense.

What does Ryan Goodell do for a living? Is Now an Attorney

Goodell attended Loyola Law School, Loyola Marymount University in 2006 and earned a degree of doctor of law (J.D.) in 2009. He began working in the legal field a few years before his graduation at Callahan, McCune & Wills as a file clerk in 2005. The former musical artist spent a year working at the office and then went on to join ICM. He there did his legal internship.

In June 2008, Ryan started working as a law clerk at Toberff & Associates. He then spent four months at The Film Department as a legal intern. Furthermore, Goodell worked as a business affairs assistant at William Morris Endeavor for around six months.

The now-accomplished attorney serves as an associate at Morris Yorn Barnes Levine Entertainment Law Firm. The firm mostly focuses on entertainment affairs. He has been a part of the company for over ten years now.

Ryan Goodell is the Husband of Nikki DeLoach? Their Wedding

Ryan and his then-girlfriend, Nikki DeLoach exchanged their vows on 5th Sep 2009. They reportedly had a low-key wedding ceremony which was attended by their family members and close friends. The two have been sharing a blissful married life ever since, supporting each other through thick and thin.

Although neither Ryan nor his wife Nikki has ever talked about how the two first came across, some reliable online sources suggest they met back in the mid-2000s. So, they were most likely in a relationship for years before they walked down the aisle.

The husband and wife Ryan and Nikki are proud parents of two kids. The two welcomed their first child, a son William Hudson Goodell on 22nd October 2013, in Los Angeles. The newborn weighed 6 pounds and 15 ounces at the time of his birth. He measured 21 inches.

Ryan’s actress-wife announced that the duo was expecting their first child back in April of that year. Meanwhile, Nikki said that the actress went through suicidal postpartum depression after giving birth to her first son.

On 20th September 2017, the husband-and-wife welcomed their second son, Bennett Christopher Goodell. Their second child shares his birthday with her late grandfather.

It was really a gut-wrenching time for the duo when they learned their soon-to-be-born second child Bennett had multiple heart issues. Nikki was just five months pregnant with Bennett when they learned about the defects. After a series of check-ups, doctors gave only a little hope of his survival.

The child was born on Sept. 20 and the very next day, DeLoach and her husband Ryan headed to Children’s Hospital Los Angeles (CHLA). They weren’t sure that the doctor could save Bennett’s life but the cardiothoracic surgeon Vaughn Starnes did what seemed to be an impossible task on 25th Sept.

A week after the successful procedure, the actress opened up all about the terrific moment in an exclusive interview with People.

Where Does Ryan Goodell Live?

Goodell currently resides in Los Angeles, California along with his wife and two kids. The family of four owns a pooch, Windsor. They often appear, going out and spending their quality time together.

What is Ryan Goodell Net Worth?

Goodell has an estimated net worth of $500,000. He has earned the majority of his wealth from his career as a lawyer. On the other hand, his spouse Nikki’s estimated wealth stands at $1 million. Her major source of income is her acting career. She has worked in a number of successful movies and TV shows over the years.

Though Ryan does not seem to enjoy social media, his wife Nikki is very active on Instagram and Twitter as well. On her Insta, she has over 162k followers. Likewise, on her Twitter, she has over 53.3k followers. On both platforms, she pretty much gives insight into her personal and professional life.