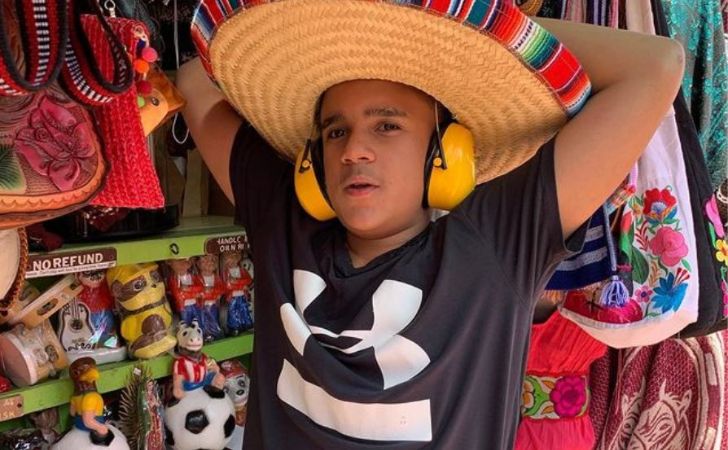 Ryder Evan Russaw is the one who was born with a silver spoon. He is the youngest son of American singer, & songwriter Faith Evans. Though he has not achieved anything yet, he is widely recognized as the child of a famous mother.

Along with popularity in social media, Ryder is also a subject in mainstream media, all because of her singer-mother. Apart from these, there are many other interesting things about Ryder Evan Russaw that you would love to know.

Well, in this article, we are going to explore every bit of his career, relationship, & other untold facts.

Ryder Evan Russaw Is The Youngest Son of Faith Evans

As we just mentioned, Ryder Evan Russaw is the son of successful singer and songwriter Faith Evans. He was born on March 22, 2007, from his mother’s relationship with her ex-husband Todd Russaw. As of 2022, he is 15 years of age.

Unfortunately, Ryder did not get to spend much time with his parents since they divorced just around 4 years of his birth. However, he still shares a great relationship with both his parents.

He Has Three Siblings

Ryder is not the only child in the family; he rather has three more siblings. He has an older brother Joshua Jahad Russaw, who was born on June 8, 1998, from his mother’s relationship with his dad Todd.

Likewise, apart from him, he has two half-siblings Chyna Tahjere Griffin and Christopher Jordan Wallace. While Chayna was born from Faith’s relationship with her then-boyfriend Kiyamma Griffin, Christopher was born from her marriage with rapper The Notorious B.I.G.

Needless to say, he shares a great relationship with all his siblings. In fact, they also have made appearances together on several occasions.

Talking about Ryder’s grandparents, they were also successful figures. While his grandfather Richard Swain was a renowned musician in the 90s, his grandmother Helene Evans was a proficient singer. Unfortunately, there is not much information available about them.

As we stated earlier, Ryder’s parent’s Faith and Todd are no more together. Though the couple apparently had a pretty sound relationship initially, their marriage eventually fell apart.

But after the separation from Todd, Ryder Evan’s mother Faith has moved on to a new relationship. On 17 July 2018, she married American record producer Stevie J. The couple had been reportedly dating for a while and came public about their relationship in 2016. They divorced in 2021.

Apart from the two, Faith’s first marriage was with American rapper The Notorious B.I.G., aka Christopher Wallace. Unfortunately, he was shot dead in 1997.

His Mother Is A Successful Singer

Ryder Evan Russaw’s mother Faith is regarded as one of the most successful singers. She is not only a singer but a songwriter, record producer, and actress as well.

As a singer, she has sold over 18 million albums in her career spanning around 2 decades. Starting out as a backing vocalist for Al B. Sure! and Christopher Williams, she went on to sign a contract with Sean “Puff Daddy” Combs’ Bad Boy Entertainment recording company in 1994. Thus becoming the first female artist to do so.

Besides, she is also a recipient of a Grammy award for I’ll Be Missing You, in 1998.

Well, apart from songs and albums, Ryder’s mum Faith has also appeared in a few movies and TV series. Some of her successful films are Turn It Up, The Fighting Temptations, & Notorious to name a few.

Not many know but Faith Evan’s son Ryder suffers from Autism. Though he was born a healthy child, he later showed signs of autism. Back in August 2019, Faith shared a beautiful post of Ryder explaining him as a brave kid to fight with the syndrome.

Besides, she also once stated that she wants Ryder to have the same childhood like the rest of her kids. In one of her interview, he stated,

Though he is fighting autism, he leads a beautiful and luxurious life at present.

Is Ryder On Social Media?

Well, Ryder is on Instagram but he is not as active on the platform. On his Instagram account where he goes as Ryder, he has over 2400 followers.

In the bio, the star kid writes “Super cool son of a superstar mom.” Besides, he also has a few profiles on Facebook but none of them are authentic profiles.

Top 10 Most Famous Star Kids You Should Know