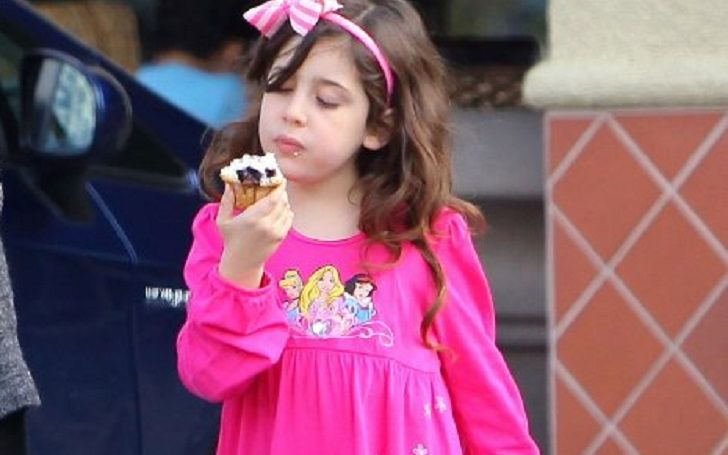 Sadie Sandler is one of the most potential young stars with dozens of acting credits. But, the girl is more popular as the first-born daughter of Adam Sandler, one of the quintessential figures in Hollywood. Adam, 54, who started making quite a name for himself in the late 1980s has to date played a number of highly acclaimed comedy roles in several box office hit movies. Most notably, the actor acted in Billy Madison, The Wedding Singer, Big Daddy, and The Longest Yard as well.

On the other hand, like her father, Sadie has also shown immense love for the acting. Started appearing in the show business from an early age, the youngster has even worked together with her father in a few hard-hit movies like Hotel Transylvania 3: Summer Vacation and Hubie Halloween.

Well, let us try to explore more about Sandler’s life as a popular star kid, her parent’s relationship, and more in the following article. Let’s start!

How old is Adam Sandler’s daughter Sadie? Her Date of Birth and Early Life

As of 2021, Sadie is aged 15. She was born on 6th May 2006,  at Cedars-Sinai in Los Angeles, California to Adam and his longtime wife Jackie Sandler. The huge news was first published on the comedian’s Website. The post said,

At the time, the post didn’t give many details about the baby girl including her name.

Later in years, in an interview with KVeller, the veteran comedian acknowledged that He was too nervous at the time of his daughter’s birth. He admitted,

In the meantime, the actor also said that fatherhood was a tough task but his kids made it full of joy. He explained the adjustments post fatherhood,

Besides, as a celebrity kid, Sadie definitely had quite a descent childhood in her hometown of Los Angeles.

Besides, as far as her nationality is concerned, Sandler belongs to American and has a Caucasian ethnicity.

Her father Adam and mother Jackie are together for over two decades. The long-lasting couple who began dating in the late 1990s exchanged their vows on 22nd June 2003 at a star-studded wedding ceremony which was held at Dick Clark’s oceanfront Malibu estate. There were around 400 guests such as Jennifer Aniston, Sharon Osbourne, Rodney Dangerfield, and more. The former Saturday Night Live star opted for a tux and yarmulke at the Jewish ceremony. They are going strong ever since.

What Does Her Mother Do? Her Professional Details

Besides, although Sadie Sandler’s mom couldn’t make a huge name in the industry like her husband, the 46-year-old has been a part of several successful movies and TV shows. Jackie landed her first acting role playing a waitress in the superhit movie Big Daddy along with her then-future-husband. Furthermore, the actress snagged the character of TGIF waitress in Zookeeper in 2011. Her other TV and film credits include Sandy Wexler, Real Rob, Kevin Can Wait, and more.

Has a Younger Sister

Jackie grew up along with her sister named Sunny Sandler, born on 2nd November 2008, in California. Like other family members, the pre-teen girl is also pretty into acting. She made her film debut at the age of two, featuring alongside her father in the comedy Grown Ups.

Sunny has since over fifteen acting credits including two voice-overs in two of the Hotel Transylvania franchise. In 2020, the promising star played the role of Cooky in Hubie Halloween sharing the screen with her sister and dad.

We have mentioned earlier the craziness that the Sandler family has for the show business. And the 15-year-old girl Sadie has also set a concrete foundation in the same world. As per her IMDB bio, Sandler made her debut appearance at the age of one in the television series VH1: All Access. As a child actress, Sadie gained early attention after playing Tardio’s daughter in the movie Grown Ups with her father. The movie was turned out to be a box office hit, grossing about $271 million worldwide.

In 2011, Adam Sandler’s daughter went on to appear in two more movies Just Go with It and Jack and Jill. Besides, a year after there, the young girl rendered a voice of Winnie / Young Mavis in the acclaimed animated movie Hotel Transylvania. She also voiced Winnie in two more of its installations Hotel Transylvania 2 in 2015 and Hotel Transylvania 3: Summer Vacation in 2018. Consists of four theatrical movies, the Hotel Transylvania franchise collected a tremendous box office collection of $1.3 billion against its combined budget of $245 million.

In addition, Sadie Sandler has also deserved credits for her work in Grown Ups 2, Blended, Pixels, The Ridiculous 6, and more. She portrayed the role of Lou’s daughter, Sally, in a buddy-action comedy film The Do-Over sharing the screen with her Adam and a few other Hollywood stars.

In 2020, the actress went on to feature in The Wrong Missy. The same year, Sadie begged the role of Danielle, a younger sister of Tommy, played by Stranger Things actor Noah Schnapp in Hubie Halloween.

Adam Levine Was Invited at the Bat Mitzvah of Sadie Sandler

Back in May 2021, Adam invited the Maroon 5 frontman Adam Levine to perform at the bat mitzvah of his daughter Sadie on Saturday night. The legendary artist performed a couple of songs along with the band’s lead guitarist, James Valentine at the celebration. Sandler also invited his best friend, Jennifer Aniston, however, the actress couldn’t attend the event.

What is Sadie Sandler’s Net Worth?

Sandler has an estimated net worth of $400,000 as of 2021. She has earned such a good amount of money from her frequent stints in movies. On the other hand, her father Adam’s estimated wealth stands at $420 million.

Sadie now resides in her father’s house in Los Angeles, California. Adam bought the mansion for $12 million from actors Kurt Russell and Goldie Hawn in 2004.

Who is Her Boyfriend? Her Love Life

Sadie remains quite secret when it comes to her love life. She is neither active on any social media handles like Facebook and Instagram. Thus, it becomes further hard to figure out whether the 15-year-old is dating someone or not. Most probably, Sandler is single at present.