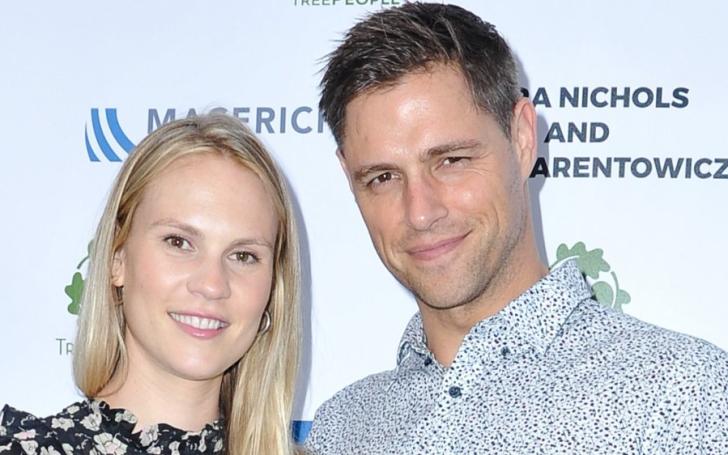 Cassidy Boesch is a playgroup teacher who is famous as actor Sam Page’s wife. Her husband is well-known for his work in series and movies like Mad Men, Christmas In Rome, The Bold Type, which also stars Aisha Dee, & Nikohl Boosheri.

Prior to getting married, the couple dated for a while. Both of them met in a strange circumstance and weren’t even planning to date anyone at the time. Thankfully, nothing went according to their plans and here we have one of the cutest couples.

In this article, we’re going to take a closer look at their relationship and also find out some interesting facts about Cassidy Boesch. We will cover her early life, education, parents, and more!

She was born Cassidy Kateb Boesch on August 27, 1987, in California. She is the younger child between Phil and Vivian Boesch. Her parents raised her alongside her older brother, Brennan Boesch, in Los Angeles.

Cassidy is of Caucasian ethnicity and belongs to German ancestry. She grew up in an upper-middle-class household.

Her father is a Lawyer by profession and operates The Boesch Law Group in Santa Monica, California. He founded the company back in 2000 and it is one of the top litigation firms in LA. Meanwhile, her mom Vivian operates a boutique-style hotel named, The Venice Beach House.

Given her parents’ profession, it is safe to say Cassidy lived a fairly lavish life.

Her brother is a professional baseball player

By the time Cassidy became famous, her brother Brennan had already made a name for himself. He is a retired professional baseball player outfielder who made his debut in the MLB with Detroit Tigers back in 2010.

After playing two seasons with Detroit, he joined the New York Yankees’ roster in 2013. He joined Los Angeles Angels the very next season in 2014 and a year after in 2015 he played for the Cincinnati Reds.

In 2016, Brennan signed a minor league deal with Boston Red Sox, and a year later, he announced his retirement from the game as the season ended.

While growing up in Los Angeles, Cassidy joined the Crossroads School. Upon finishing high school, she attended Brown University. From college, she graduated with a degree in Bio-Medicine Community Health.

During her time in the college, Cassidy started working for the welfare of underprivileged infants and toddlers in Providence, Rhode Island. Afterward, she spent three summers in South Africa, Kenya, and Tanzania wherein she helped implement health and wellness programs in various orphanages.

Upon returning, she joined the Master’s program at the University of Southern California and graduated with a post-graduate degree in Marriage, Family, and Child Therapy.

She isn’t just your regular celebrity spouse as Cassidy has her own fulfilling career. As of now, she works as a co-director, and teacher at The Playgroup House. She is the founder of the playschool.

The school has two teachers Cassidy and Elisa Furie. Both of them have a lot of experience in this field. Cassidy has worked closely with families. She has several years of experience while working with The Maple Counseling Center’s Adolescent and Child Therapy Program.

The pair exchanged vows on November 8, 2014, at Villa Sevillano in Montecito, California. Page announced the big news through his Instagram account where he shared a picture of them sharing their first kiss as a husband and wife.

The nuptials in itself was an intimate affair with many of their close friends and family in attendance. One of his groomsmen was his Dancing with the Stars co-star, Jonathan Bennett.

A source, while describing the event, told E! News, “It was truly a fairy-tale weekend.” For the wedding, Cassidy wore a beautiful and radiant white dress, and her husband Sam looked dapper in a black suit.

How did Cassidy and Sam first meet?

They first came across one another at a mutual friend’s cocktail party. The only ironical thing about it was that neither of them was planning to attend the affair but things don’t always work out the way we thought it to be, isn’t it?! What’s more interesting is that Cassidy wasn’t even aware of the party but her best friend took her to the party on a false premise.

Whatever the case may be, Sam and Cassidy didn’t regret going to the party as they found each other. Throughout the party, Cassidy and Sam conversed and got to know each other. Sam was instantly smitten with Cassy.

In an interview with Cosmopolitan, Sam mentioned Cassidy as, “the greatest person in my life.” What’s more intriguing is that Sam reportedly broke a promise in order to be with Cassidy. So what happened was, he’d made a promise to his best friends that he will remain single the whole summer and then he bumped into Cassidy.

Also Read: Find Out About Other Famous Celebrity Wives You Never Knew

Cassidy Boesch is a mother of three children

From her long-term relationship with Sam, Cassidy became a mother of three beautiful children. The lovebirds welcomed their first child, a boy named Logan on September 27, 2016.

A couple of years after, Cassidy became a mother for the second time, but this time she gave birth to twin girls, Annabelle and Evie on August 11th, 2018.

Talking about Cassidy Boesch’s net worth is easily worth around $500 thousand. Likewise, her husband is pretty rich with a net worth of $2 million as per Celebrity Net Worth.

Well, the family lives a luxurious life together.