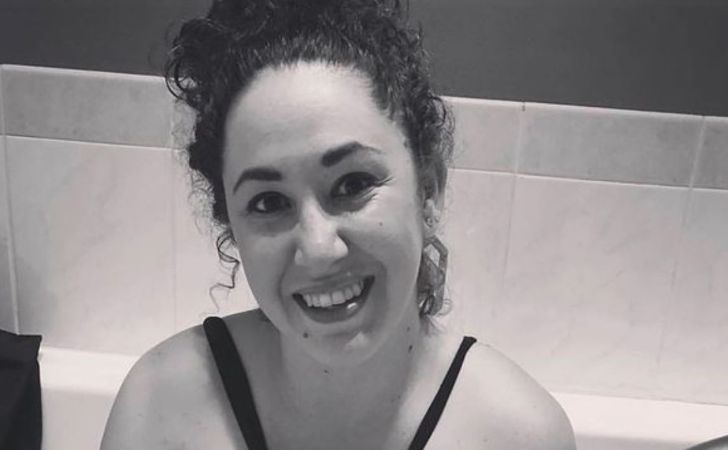 Samantha Taffer is a successful bartender by profession but she is most recognized as the daughter of entrepreneur and television personality, Jon Taffer. She has also appeared in the reality TV show, Bar Rescue.

However, Taffer is no more active in the media industry and rather leads a successful career away from the limelight. Besides having a successful professional life, she is also happily married and also has children with her husband. But who is she married to?

Well, in this article, we are going to explore everything about Samantha Taffer’s personal and professional life in detail.

Samantha Taffer Is The Daughter of Jon Taffer

As we said, Samantha is the only daughter of TV producer and entrepreneur Jon Taffer. She was born on 1st June 1989, from her father’s relationship with his first wife.

Growing up in her hometown with her parents, she shared a great relationship with them, but she has unfortunately not shared many details about her mother.

She belongs to Jewish ancestry and has American nationality. Talking about her education, she completed her primary education in her hometown and later attended the University of Southern Indiana from 2007 to 2009.

What Is Samantha Taffer Age?

Samantha Taffer Is A Bartender And Reality TV Star

Jon Taffer’s daughter Samantha Taffer is a bartender by profession. As a bartender, she has worked in various bars and restaurants. She began her career professionally as a General Manager at the Chilly Willy’s Pub. There she worked for around four years from October 2010 to December 2014.

In October 2013, Taffer joined Republic National Distributing Company as a General Market Sales Representative. Moreover, she is also been the Key account manager of the company since September 2017.

Don’t Miss: Top 10 Most Handsome People on the Planet Earth

Apart from these, Samantha has also been a part of the reality TV series, Bar Rescue on Spike TV. The show also stars her father among others that include P.J. King, & Mia Mastroianni.

Samantha Taffer Is Married To her Husband Cody

Samantha Taffer is a married woman. She is married to her husband named Cody Hanley. As per the reports, the couple walked down the aisle on September 13, 2015. Ever since her marriage, she goes by Samantha Taffer Hanley.

Not many know but Taffer and Hanely had known each other for years before they tied the knot. In fact, the duo dated for a while and were in a live-in relationship for years. Back then, they had also adopted a beautiful dog, a French Mastiff, who also lived together with them.

Well, as of 2023, the husband and wife are married for over 6 years and they still share the same love and passion for one another. However, Taffer mostly keeps her life away from the limelight and avoids the media despite being a celebrity daughter.

She Has A Son With Her Hubby

Well, she is also a mother of a beautiful son Rhett Hanley. She welcomed her first child with Cody on May 21, 2019. Well, as per his date of birth, he is a Gemini boy. Soon after his birth, Taffer’s father Jon took to Instagram Twitter, and Facebook to announce the detail.

Sharing the news of the first baby in the Hanley family, Jon in Facebook and Twitter wrote,

Introducing Rhett Hanley! Born Tuesday May 21st! Congratulations to my daughter Samantha and her husband Cody!

As of 2023, Samantha’s son Rhett is over 3 years of age. As a mother, she shares a great relationship with the newborn.

Her father Jon is married twice. However, he has not revealed any details about his first wife, that is Samantha’s mother. Currently, Jon is married to his second wife Nicole Taffer.

They reportedly got married in 2000 and are leading a beautiful life together ever since. Despite being together for so long, they have not welcomed any kids so far.

Talking of Samantha’s step-mom Nicole, she is not a professional actress but has appeared in a few episodes of the TV series, Bar Rescue.

Is Samantha Taffer On Social Media?

Likewise, she is also on Twitter with over 1k followers. She occasionally posts on both platforms, giving insight into her professional life.

Currently, Samantha, along with her hubby and son lives in Henderson, Kentucky. On her Instagram bio, she has written that Alcohol pays her bill so it might mean she owns a brewery or something down the line.

How Much Is Samantha’s Net Worth?

As a working individual and a successful reality TV star and bartender, Samantha has undoubtedly amassed a decent fortune. She reportedly earns a good salary for her work as a professional. However, she has so far not revealed her exact net worth.

On the other hand, her father has a net worth of $14 million as of 2023, as per Celebrity Net Worth.