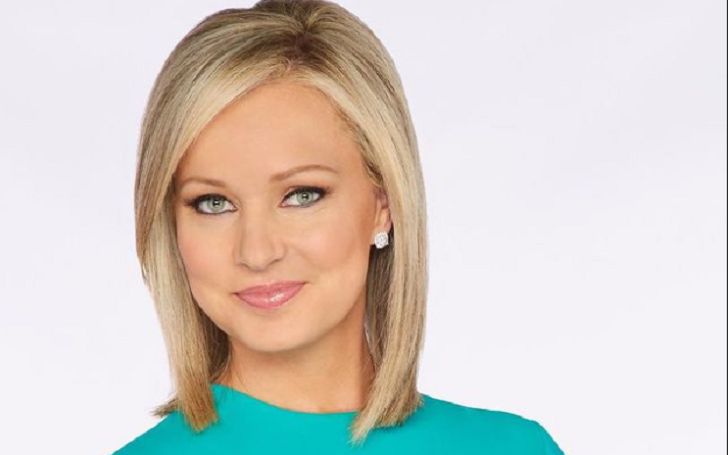 Born and brought in Wheaton, Illinois, Sandra Smith is a media personality who currently serves as a co-anchor of America Reports on the Fox News Channel. Smith, who began her career delivering the newspaper was one of the versatile athletes at college, running both track and field.

Along with her professional accomplishments, Smith has also been leading a happy married life with her long-time husband John Conolly for a long time. The loving duo is also the parents of two kids.

Let’s take a look at things that you didn’t know about Sandra!

Sandra Smith Parents: Her father was a Veteran

Smith was born to a veteran father who served in the U.S. Armed forces. Back in November 2012, the co-anchor shared a throwback photo of her father in an army dress with the caption,

Furthermore, Sandra posted the photo of her veteran dad and uncle from 1968 FORT KNOX on her Instagram. In the meantime, many sources say that her dad used to work as a floor trader at Chicago’s Mercantile Exchange.

Sandra is the Youngest of Six Children

Smith is from a joint middle-class family who grew up as the youngest of six siblings along with four brothers and one sister. She often shares adorable photos along with her siblings on social media profiles. She uploaded a photo with older sister Caroline, her 14-year senior on the occasion of the 2020 National Siblings Day. Smith wrote,

“My sister Caroline and I are 14 years apart. She is the oldest and I am the youngest. 4 siblings in between. Big families are amazing. Despite the gap in years growing up.. she’s one of my best friends today.”

Smith went to Wheaton Warrenville South High School, graduating in 1998. She was a sports enthusiast from an early age. She competed in cross country as well as in track during her time at the school.

Following her graduation, Sandra enrolled at the Illinois State University for a while before transferring to Louisiana State University in Baton Rouge. The athlete was involved at several LSU and LSU Alumni track-and-field events running both 1,500 meters and 3,000 meters.

Smith initiated her career as a research associate at Aegis Capital Group. She then joined Hermitage Capital Corporation as a trader. Sandra did a few other jobs before making her TV debut with a role of an on-air reporter for Bloomberg Television.

Her career reached a new height after Smith joined FOX Business Network as a reporter in October 2007. She appeared in a few FOX programs such as Fox Business Happy Hour and Red Eye w/ Greg Gutfeld. She is now a co-anchor of America Reports on the Fox News Channel.

The couple tied the knot on 1st May 2010. Their wedding ceremony took place at Holy Name Cathedral. The bride and groom wore classic black and white attire. Looking back at the love story of the duo, they first met when Sandra left her post-college hedge fund job and began working as a sales trader in her hometown of Chicago.

Coincidentally, her future-husband John was also one of the traders at the firm. When John saw her for the first time, he instantly knew that he is going to marry Sandra. He told in an interview with Chicago Tribune,

“I knew right then that she was the girl I was going to marry.”

A couple of weeks later Sandra joined the company Conolly left the firm as he started his own business.

The duo went to the Chicago Symphony Orchestra for their first date. Their second date was at the Museum of Contemporary Art, where Sandra also brought her cousins, mother, and step-dad.

Furthermore, during the same time, John used to work as a sailor, because of this, Smith also got the chance to go on several sailing dates with her then-boyfriend. She said,

“He was also a very competitive sailor at the time and took me sailing on several of our initial dates. He was challenging me; I wasn’t going sailing and to art shows when I met him.”

The duo also has a considerable age-gab but it never bothered the couple. Smith said Chicago Tribune,

“Obviously, I did a little research on him when we started dating; everybody does. He hadn’t been dating a lot. I reaped the benefits of that. He gained all these other experiences — traveling, working. I don’t think I would have gotten all of John Conolly if I hadn’t met him at that time in his life.”

They Suffered from a Long-Distance Relationship

After the couple tied the knot in 2010, they were in a long-distance relationship for some time. Sandra was working for Bloomberg Television in New York and her husband was in Chicago. She booked flights every Friday from New York to Chicago to meet her man but that was not very practically possible.

Thus, John transferred most of his work life to New York in early 2011, selling out all his business in Chicago.

They are adorable as a couple.

The couple who has been married for over a decade is also blessed with two kids. They welcomed their first child, a daughter Cora Belle Connelly on August 23, 2013. Sandra gave birth to their second child, a son in 2015. The media personality has kept her kids behind closed doors and rarely shares their photos on her social media.

John the School of the Art Institute of Chicago graduate first landed the job at Terra Nova Tradig, LLC and worked as the head of the futures division at the company for over three years. He then became the vice president at Advantage Futures in Feb 2005 and held the job until November 2007.

Smith also spent nearly seven years working as a director at the National Introducing Brokers Association. Moreover, he served as a director of product marketing for CME Group. His last job was at Azul Partners, where he worked as a managing partner and chief marketing officer.

As of now, Sandra Smith’s husband mentioned himself as self-employed on his Linkedin profile.

Net Worth: How much does Sandra Smith make a year?

Her net worth $6 million. She has mostly earned money from her journalism career. She currently serves as a co-anchor of America Reports on the Fox News Channel. Her per annum salary is $3 million. Besides, the journalist currently resides in New York along with her family.