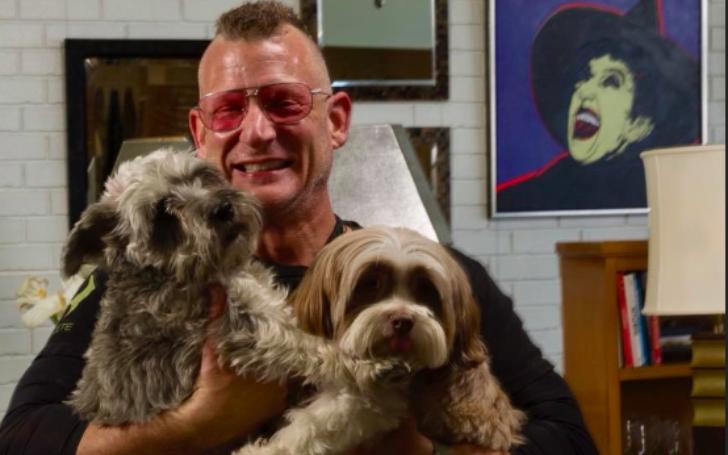 Sandy Corzine is known across the soap opera community as Sharon Case‘s ex-husband. Sharon is famous for her iconic role of Sharon Newman in the hit series, The Young and the Restless.

The marriage life between Sharon and Sandy didn’t work out for long and they divorced after just a few years. Besides, there are rumors that he remarried after divorcing Sharon. So, who is his new wife, then? Let’s find out. In addition, we’ll also take a look into Sandy and Sharon’s marriage’s intricate details.

Aside from their relationship, we will also take a look at the life of Sandy Corzine and know some interesting facts. Did you know his mother is a big businesswoman? Well, let’s find out everything.

Who is Sandy Corzine? His Parents and Siblings

Sandy was born on September 17. As of 2020, he is in his 40s. He is the son of one of the renowned furniture and textile designer, Nancy Corzine. As for the identity of his father, it has been kept behind closed doors.

Talking about his education, Sandy studied at The Webb Schools. He also graduated with a Master’s degree in International Relations and Global Politics from the University of Southern California.

Sandy became a prominent figure in the media after his high-profile relationship with Sharon. Other than that, he lives a rather quiet life in the western neighborhood of Los Angeles.

Sandy’s mom Nancy Corzine is a proud mother of three children one of which is Sandy. Apart from himself, he has one sister named Victoria and one another sibling.

His mom founded the Nancy Corzine furniture, one of the best furniture designers in the United States. Her company offers luxurious but contemporary styled furniture and home jewelry.

Nancy’s company is one of the best out there, however, the journey to reach this place was filled with obstacles. Not only did she took care of Sandy and his two siblings, but she has also built a big empire as well.

Sandy Corzine was once married to Sharon Case: Details on their wedding

The former flames tied the knot on April 30, 2017. The beautiful wedding took place in the beautiful country of Mexico. The ceremony in itself was quite small with no guests in attendance.

Nevertheless, the hotel they were staying in threw them a big wedding party which somehow compensated for the lack of guests.

Prior to getting married, the pair had dated for two and a half years before Sandy proposed to Sharon. They were betrothed for a long time before their nuptials.

Sandy and Sharon were first introduced by a singer

So a few years before Sharon and Sandy first started dating, the actress once dated country singer, Jimmy Wayne. Sharon and Jimmy, despite splitting up, remained good friends.

Now, Jimmy was great friends with the singer Jewel, who in turn was friends with Sandy. It was Jewel who first introduced Sandy and Sharon to each other.

After a mere two years, the pair had decided to divorce

It is sad to know that Sandy and Sharon’s relationship couldn’t hold out for long. There is no single reason as to why their marriage couldn’t last. In fact, it was a total shock for Sharon as she’d never imagined this would come.

She even mentioned her divorce as a war that she has lost. In an interview, when asked when did she first realized their marital life was over she said,

“Within the first few months, actually, but even then I had such high hopes. I came into this marriage with so much energy that I thought, “Whatever is the problem, we’re going to fix it.” I had a lot of enthusiasm, but I lost the war. I didn’t think I would, but I did.”

To her dismay, things didn’t turn out as she’d hoped. Their divorce was finalized in November of 2009, two and a half years after their wedding. The pair didn’t have any children between them.

Sharon Case once talked about having a baby with Sandy

In an interview published in the July 13th issue of the Soap Opera Digest, Sharon opened up about wanting to have kids. According to Sharon, she had never thought about becoming a mother as she always wanted to excel in her career. Nevertheless, it all changed for her when she fell in love and married Sandy. She instantly had a change of heart.

She maintained in the interview,

Furthermore, at the time, she also affirmed there wouldn’t be a whole bunch of Sharon and Sandy around the house. She only wants one child as more than that will restrict her dream of traveling around the globe.

In the same interview with Soap Opera Digest where Sharon had opened up about her tragic divorce, it was also stated that her ex-husband Sandy was once married before. In addition, the story also maintained that Sandy got back together with his former wife and children after separating from the actress.

Now going by Sandy’s Facebook account, he can be seen with a female. Judging by their coziness, it is safe to say, she is either his girlfriend or wife. If the above story has a least bit of credibility,, then she might be his wife.

Nonetheless, we can’t seem to find a picture of Sany with his children, though he has added a picture of a small girl once or twice.

What is Sandy Corzine up to these days?

At the moment, he serves as the President of Nany Corzine, his mother’s furniture company. He currently spends his days playing with his pet pooches and hanging out with his friends and family member.

Ever since his divorce from Sharon, Corzine is enjoying a peaceful life.